Taking Cloud Adoption to the Core

Insurance and reinsurance companies have been more reticent than other business sectors in embracing Cloud technology. EXPOSURE explores why it is time to ditch “the comfort blanket”

The main benefits of Cloud computing are well-established and include scale, efficiency and cost effectiveness. The Cloud also offers economical access to huge amounts of computing power, ideal to tackle the big data/big analytics challenge. And exciting innovations such as microservices — allowing access to prebuilt, Cloud-hosted algorithms, artificial intelligence (AI) and machine learning applications, which can be assembled to build rapidly deployed new services — have the potential to transform the (re)insurance industry.

And yet the industry has continued to demonstrate a reluctance in moving its core services onto a Cloud-based infrastructure. While a growing number of insurance and reinsurance companies are using Cloud services (such as those offered by Amazon Web Services, Microsoft Azure and Google Cloud) for nonessential office and support functions, most have been reluctant to consider Cloud for their mission-critical infrastructure.

In its research of Cloud adoption rates in regulated industries, such as banking, insurance and health care, McKinsey found, “Many enterprises are stuck supporting both their inefficient traditional data-center environments and inadequately planned Cloud implementations that may not be as easy to manage or as affordable as they imagined.”

It also found that “lift and shift” is not enough, where companies attempt to move existing, monolithic business applications to the Cloud, expecting them to be “magically endowed with all the dynamic features.”

“We’ve come up against a lot of that when explaining the difference what a cloud-based risk platform offers,” says Farhana Alarakhiya, vice president of products at RMS. “Basically, what clients are showing us is their legacy offering placed on a new Cloud platform. It’s potentially a better user interface, but it’s not really transforming the process.”

Now is the time for the market-leading (re)insurers to make that leap and really transform how they do business, she says. “It’s about embracing the new and different and taking comfort in what other industries have been able to do. A lot of Cloud providers are making it very easy to deliver analytics on the Cloud. So, you’ve got the story of agility, scalability, predictability, compliance and security on the Cloud and access to new analytics, new algorithms, use of microservices when it comes to delivering predictive analytics.”

While moving from a server-based platform to the Cloud can bring numerous advantages, there is a perceived unwillingness to put high-value data into the environment, with concerns over security and the regulatory implications that brings.

This includes data protection rules governing whether or not data can be moved across borders. “There are some interesting dichotomies in terms of attitude and reality,” says Craig Beattie, analyst at Celent Consulting. “Cloud-hosting providers in western Europe and North America are more likely to have better security than (re)insurers do in their internal data centers, but the board will often not support a move to put that sort of data outside of the company’s infrastructure.

“Today, most CIOs and executive boards have moved beyond the knee-jerk fears over security, and the challenges have become more practical,” he continues. “They will ask, ‘What can we put in the Cloud? What does it cost to move the data around and what does it cost to get the data back? What if it fails? What does that backup look like?’”

With a hybrid Cloud solution, insurers wanting the ability to tap into the scalability and cost efficiencies of a
software-as-a-service (SaaS) model, but unwilling to relinquish their data sovereignty, dedicated resources can be developed in which to place customer data alongside the Cloud infrastructure. But while a private or hybrid solution was touted as a good compromise for insurers nervous about data security, these are also more costly options. The challenge is whether the end solution can match the big Cloud providers with global footprints that have compliance and data sovereignty issues already covered for their customers.

“We hear a lot of things about the Internet being cheap — but if you partially adopt the Internet and you’ve got significant chunks of data, it gets very costly to shift those back and forth,” says Beattie. 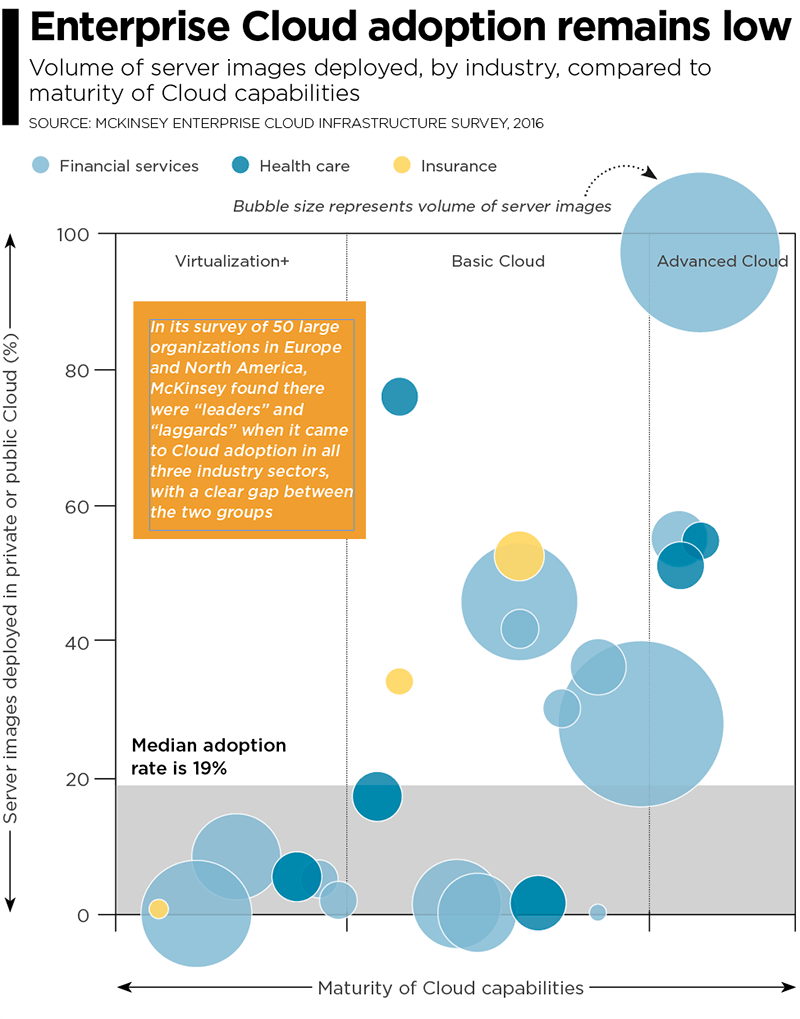 Not moving to the Cloud is no longer a viable option long term, particularly as competitors make the transition and competition and disruption change the industry beyond recognition. Given the increasing cost and complexity involved in updating and linking legacy systems and expanding infrastructure to encompass new technology solutions, Cloud is the obvious choice for investment, thinks Beattie.

“If you’ve already built your on-premise infrastructure based on classic CPU-based processing, you’ve tied yourself in and you’re committed to whatever payback period you were expecting,” he says. “But predictive analytics and the infrastructure involved is moving too quickly to make that capital investment. So why would an insurer do that? In many ways it just makes sense that insurers would move these services into the Cloud.

“State-of-the-art for machine learning processing 10 years ago was grids of generic CPUs,” he adds. “Five years ago, this was moving to GPU-based neural network analyses, and now we’ve got ‘AI chips’ coming to market. In an environment like that, the only option is to rent the infrastructure as it’s needed, lest we invest in something that becomes legacy in less time than it takes to install.”

As discussed, few (re)insurers have taken the plunge and moved their mission-critical business to a Cloud-based SaaS platform. But there are a handful. Among these first movers are some of the newer, less legacy-encumbered carriers, but also some of the industry’s more established players. The latter includes U.S.-based life insurer MetLife, which announced it was collaborating with IBM Cloud last year to build a platform designed specifically for insurers. Meanwhile Munich Re America is offering a Cloud-hosted AI platform to its insurer clients. “The ice is thawing and insurers and reinsurers are changing,” says Beattie. “Reinsurers [like Munich Re] are not just adopting Cloud but are launching new innovative products on the Cloud.”

What’s the danger of not adopting the Cloud? “If your reasons for not adopting the Cloud are security-based, this reason really doesn’t hold up any more. If it is about reliability, scalability, remember that the largest online enterprises such as Amazon, Netflix are all Cloud-based,” comments Farhana Alarakhiya. “The real worry is that there are so many exciting, groundbreaking innovations built in the Cloud for the (re)insurance industry, such as predictive analytics, which will transform the industry, that if you miss out on these because of outdated fears, you will damage your business. The industry is waiting for transformation, and it’s progressing fast in the Cloud.”