The latest track probability analysis of the current model forecasts has been released by the RMS HWind team, based on forecast models initialized at 12:00 UTC Friday, September 8. This new proprietary track forecast probability product from RMS HWind provides unique insight into the likelihood of where a storm might go, to help deliver insights beyond what is available from public sources. 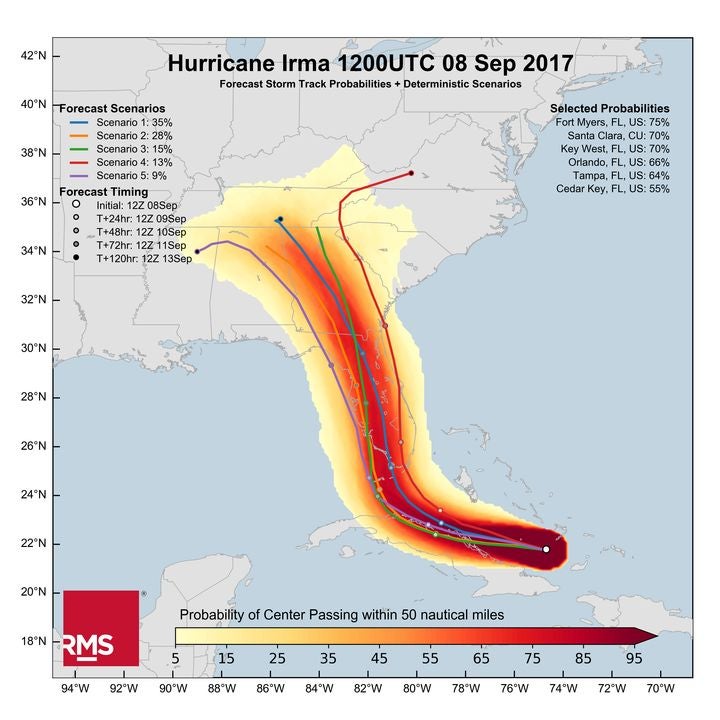 With Irma tracking west-northwest, closer to the United States, the forecast guidance has started to converge on a solution that is to the west of Thursday’s forecast track. The hurricane’s most likely path takes it west-northwest along northern Cuba before turning north through the Florida Keys towards Florida’s Gulf Coast. Any interactions with Cuba would likely weaken the hurricane prior to making landfall in the United States. Few, if any, reasonable outcomes exist that do not include a direct landfall in the state of Florida.

Based on the probabilities in the shaded density data, the most likely landfall location in the state falls between the southernmost tip of the peninsula and the Tampa metropolitan area, including the Florida Keys. In fact, model guidance suggests that both Key West and Fort Myers have a 70 percent chance or greater of Irma passing within 50 nautical miles of either city. However, a less likely outcome remains, wherein Irma remains just offshore in the eastern Gulf of Mexico making an eventual landfall in northern Florida.

Regardless of the ultimate track, each of the highlighted scenarios would bring Irma’s large wind field across the vast majority of the state. As of 21:00 UTC on Friday, hurricane force winds extend outwards almost 90 nautical miles from the storm’s center. Therefore, strong winds and heavy rains will still reach areas in the southeastern part of the state, where the center is seemingly less like to pass.

As a measure of storm size and surge destructive potential, RMS HWind uses a unique Integrated Kinetic Energy (IKE) metric. Our 21:00 UTC Friday HWind analysis indicates that the IKE in Irma’s wind field has increased to approximately 125 Terajoules (TJ). This amount is several times greater the values found in both Hurricanes Charley and Andrew, which are two of the most recent storms to strike the Florida Peninsula with a comparable intensity to Irma. In addition, Irma now contains slightly more IKE in its wind field than did Hurricane Katrina on August 29, 2005 ahead of its landfall on the Gulf Coast.

For more information on RMS HWind, RMS clients can consult their account representatives for details on the latest RMS HWind updates.