The latest track probability analysis of the current model forecasts has been released by the RMS HWind team, based on forecast models initialized at 12:00 UTC Friday, October 6. Using this new proprietary track forecast probability product from RMS HWind provides unique insight into the likelihood of where a storm might go, and helps to deliver insights beyond what is available from public sources.

Tropical Storm Nate moved quickly to the north-northwest across the western Caribbean during Friday afternoon Eastern Time (ET). The HWind snapshot from 18:00 UTC Friday, October 8 included earlier data from the National Oceanic and Atmospheric Administration (NOAA) and the U.S. Air Force Reserve Hurricane Hunters, and estimated that Nate had maximum sustained winds of approximately 55 miles per hour (88 kilometers per hour). Tropical storm force winds were limited to a relatively small area to the east of Nate’s center, and as such, the storm only contained four Terajoules of integrated kinetic energy within its wind field.

Forecast guidance continues to be tightly grouped, indicating that Nate will pass near the northeastern tip of the Yucatan Peninsula tonight ET before continuing into the Gulf of Mexico. Landfall along the Central Gulf Coast will follow late on Saturday night or early Sunday morning ET. The forecast has shifted a little bit to the east in the latest model cycle. The most probable outcome based on the shaded data in the RMS HWind forecast prototype lies just to the east of New Orleans, with nearly two-thirds of the underlying 12:00 UTC Friday models bringing the center of Nate within 50 nautical miles of Gulfport, Mississippi. After landfall, Nate will race north and northeastward, which will help to limit rainfall totals and the amount of time that the Gulf Coast is exposed to the storm’s strongest winds.

The environment along Nate’s forecast track remains favorable for development with warm sea surface temperatures and weak to moderate vertical wind shear. Therefore, Nate will have an opportunity to become a hurricane before making landfall in the United States. However, the storm will be steered quite quickly through the Gulf of Mexico between an area of low pressure to its west and a ridge to its east. The fast storm motion will limit the amount of time Nate has over water, which should preclude significant intensification, especially should the storm weaken during its interactions with the Yucatan Peninsula tonight ET. 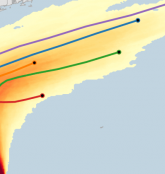