How poor infrastructure, grid blackouts and runaway business interruption has hampered Puerto Rico’s recovery in the aftermath of Hurricane Maria

As the 2018 North Atlantic hurricane season continues, Puerto Rico has yet to recover from destructive events of the previous year. In September 2017, Category 4 Hurricane Maria devastated several Caribbean islands, including Puerto Rico, and left a trail of destruction in its path. For many, Maria was one of the worst natural catastrophes to hit a U.S. territory, causing an estimated US$65 billion to US$115 billion in damage and claiming as many as 4,500 to 5,000 lives.

The damage wrought has further strained the island’s sluggish economy. Puerto Rico had over US$70 billion in public debt when Maria hit. Economic forecasts for 2018 to 2020, considering the impact of Hurricane Maria, suggest Puerto Rico’s GDP will decline by 7 to 8 percent in 2018 and likely remain in a negative range of 5 to 7 percent for the next few years.

Power outages, business interruption (BI) and contingent BI (CBI) — including supply chain disruption — have hampered the economy’s recovery. “Resilience is also about the financial capacity to come back and do the reconstruction work,” explains Pooya Sarabandi, global head of data analy-
tics at RMS. “You’re now into this chicken-
and-egg situation where the Puerto Rican government already has a lot of public debt and doesn’t have reserves, and meanwhile the federal U.S. government is only willing to provide a certain level of funding.”

Maria’s devastating impact on Puerto Rico demonstrates the lasting effect a major catastrophe can have when it affects a small, isolated region with a concentrated industry and lack of resilience in infrastructure and lifelines. Whereas manufacturers based on the U.S. mainland have contingencies to tap into — the workforce, raw materials and components, and infrastructure in other parts of the country during times of need — there is not the same opportunity to do this on an island, explains Sarabandi.

Around 80 percent of utility poles were damaged in the event, leaving most of the island without electricity. Two weeks after the storm, 90 percent of the island was still without power. A month on, roughly 85 percent of customers were not connected to the power grid. Three months later, this figure was reported to be about half of Puerto Ricans. And finally, after six months, about 15 percent of residents did not have electricity.

“There’s no real damage on the grid itself,” says Victor Roldan, head of Caribbean and Latin America at RMS. “Most of the damage is on the distribution lines around the island. Where they had the better infrastructure in the capital, San Juan, they were able to get it back up and running in about two weeks. But there are still parts of the island without power due to bad distribution infrastructure. And that’s where the business interruption is mostly coming from.

“There are reports that 50 percent of all Maria claims for Puerto Rico will be CBI related,” adds Roldan. “Insurers were very competitive, and CBI was included in commercial policies without much thought to the consequences. Policyholders probably paid a fifth of the premiums they should have, way out of kilter with the risk. The majority of CBI claims will be power related, the businesses didn’t experience physical damage, but the loss of power has hit them financially.”

Damage to transportation infrastructure, including railways and roads, only delayed the pace of recovery. The Tren Urbano, the island’s only rail line that serves the San Juan metropolitan area (where roughly 60 percent of Puerto Ricans live), started limited service for the first time almost three months after Hurricane Maria struck. There were over 1,500 reported instances of damage to roads and bridges across the island. San Juan’s main airport, the busiest in the Caribbean, was closed for several weeks. 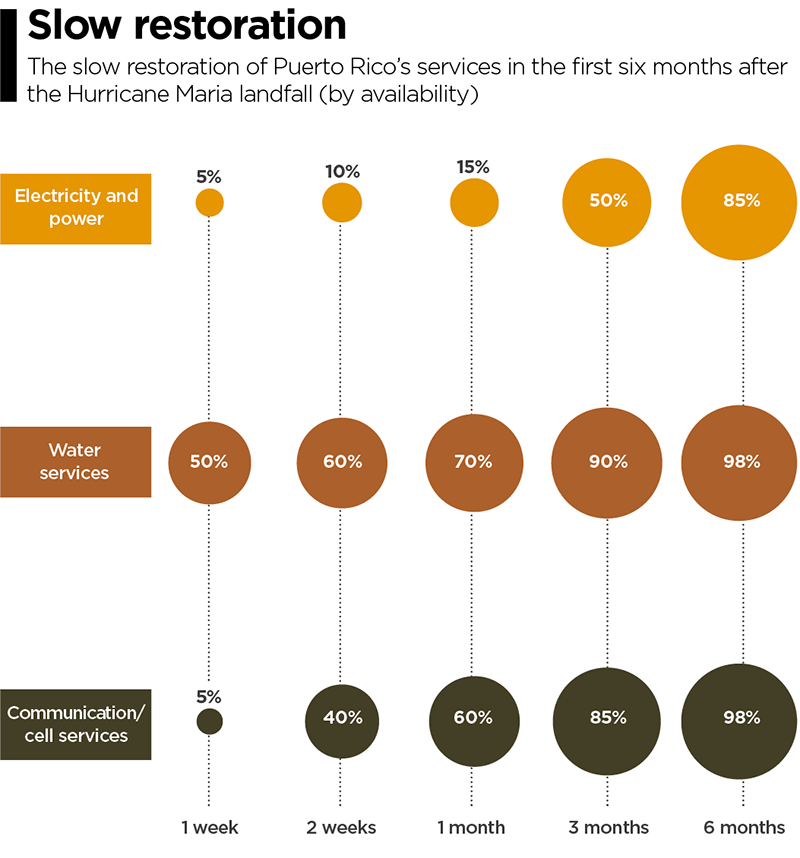 A Concentration of Risk

Roughly half of Puerto Rico’s economy is based on manufacturing activities, with around US$50 billion in GDP coming from industries such as pharmaceutical, medical devices, chemical, food, beverages and tobacco. Hurricane Maria had a significant impact on manufacturing output in Puerto Rico, particularly on the pharmaceutical and medical devices industries, which is responsible for 30 percent of the island’s GDP.

According to Anthony Phillips, chairman of Willis Re Latin America and Caribbean, the final outcome of the BI loss remains unknown but has exceeded expectations due to the length of time in getting power reinstalled. “It’s hard to model the BI loss when you depend on the efficiency of the power companies,” he says. “We used the models and whilst personal lines appeared to come in within expectations, commercial lines has exceeded them. This is mainly due to BI and the inability of the Puerto Rico Electric Power Authority (PREPA) to get things up and running.”

Home to more than 80 pharmaceutical manufacturing facilities, many of which are operated by large multinational companies, Puerto Rico’s pharmaceutical hub was a significant aggregation of risk from a supply chain and insurance perspective. Although only a few of the larger pharmaceutical plants were directly damaged by the storm, operations across the sector were suspended or reduced, in some cases for weeks or even months, due to power outages, lack of access and logistics.

“The perception of the Business Interruption insurers anticipated, versus the reality, was a complete mismatch”

“The perception of the BI insurers anticipated, versus the reality, was a complete mismatch,” says Mohsen Rahnama, chief risk modeling officer at RMS. “All the big names in pharmaceuticals have operations in Puerto Rico because it’s more cost-
effective for production. And they’re all global companies and have backup processes in place and cover for business interruption. However, if there is no diesel on the island for their generators, and if materials cannot get to the island, then there are implications across the entire chain of supply.”

While most of the plants were equipped with backup power generation units, manu-
facturers struggled due to long-term lack of connection to the island’s only power grid. The continuous functioning of on-site generators was not only key to resuming production lines, power was also essential for refrigeration and storage of the pharmaceuticals. Five months on, 85 medicines in the U.S. were classified by the Food and Drug Administration (FDA) as “in shortage.”

There are several reasons why Puerto Rico’s recovery stalled. Its isolation from the U.S. mainland and poor infrastructure were both key factors, highlighted by comparing the island’s recovery to recovery operations following U.S. mainland storms, such as Hurricane Harvey in Texas last year and 2012’s Superstorm Sandy.

Not only did Sandy impact a larger area when it hit New York and New Jersey, it also caused severe damage to all transmission and distribution systems in its path. However, recovery and restoration took weeks, not months.

It is essential to incorporate the vulnerabilities created by an aggregation of risk, inadequate infrastructure and lack of contingency options into catastrophe and pricing models, thinks Roldan. “There is only one power company and the power company is facing bankruptcy,” he says. “It hasn’t invested in infrastructure in years. Maria wasn’t even the worst-case scenario because it was not a direct hit to San Juan. So, insurers need to be prepared and underwriting business interruption risks in a more sophisticated manner and not succumbing to market pressures.”

CBI Impact on Hospitality and Tourism

Large-magnitude, high-consequence events have a lasting impact on local populations. Businesses can face increased levels of disruption and loss of revenue due to unavailability of customers, employees or both. These resourcing issues need to be properly considered in the scenario-planning stage, particularly for sectors such as hospitality and tourism.

Puerto Rico’s hospitality and tourism sectors are a significant source of its GDP. While 69 percent of hotels and 61 percent of casinos were operational six weeks after Maria struck, according to the Puerto Rico Tourism Company, other factors continued to deter visitors.

It was not until the end of February 2018, five months after the event, that roughly 80 percent of Puerto Rico’s hotels and restaurants were back in business with tourists returning to the island. This suggests a considerable loss of income due to indirect business interruption in the hospitality and tourism industry.