With innovation in the flood market increasing, EXPOSURE explores whether high-definition (HD) flood models are one of the keys to closing the protection gap

In August 2017, Hurricane Harvey brought the highest level of rainfall associated with a tropical cyclone in the U.S. since records began, causing catastrophic flooding in some of the most populated areas of the Texas coast, including Houston. The percentage of losses attributed to inland flood versus wind damage was significant, altering the historical view that precipitation resulting from a tropical storm or hurricane is an attritional loss and highlighting the need for stochastic modeling.

Total economic losses resulting from Harvey were around US$85 billion and insured losses were US$30 billion, revealing a significant protection gap, particularly where inland flood damage was concerned. Around 200,000 homes were inundated by the floods, and yet 80 percent of homes in the Houston area were uninsured. 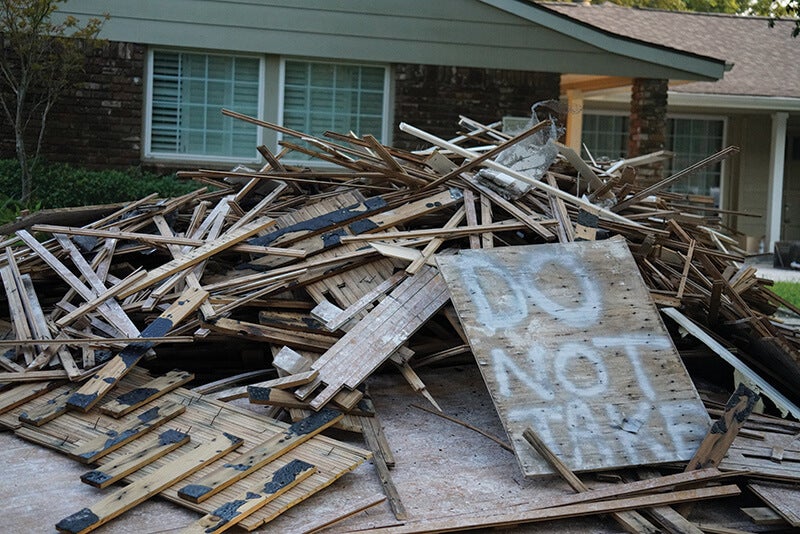 An innovative catastrophe bond has suggested one way this protection gap could be reduced in the future, particularly as a private flood insurance market develops in the U.S. FloodSmart Re, which was announced at the end of July 2018, secured US$500 million of reinsurance protection on behalf of FEMA’s National Flood Insurance Program (NFIP). Reinsurer Hannover Re was acting as the ceding reinsurer for the transaction, sitting between the NFIP and its Bermuda-based special purpose insurer.

“It’s a landmark transaction — the first time in history that the U.S. federal government is sponsoring a catastrophe bond,” says John Seo, co-founder and managing principal at Fermat Capital. “It’s just tremendous and I couldn’t be more excited. Events like Harvey are going to accelerate the development of the flood market in terms of risk transfer to the insurance-linked securities (ILS) market.

“You have to have more efficient risk pooling and risk sharing mechanisms,” he adds. “There’s over US$200 trillion dollars of capital in the world, so there’s obviously enough to efficiently absorb event risk. So, it’s about, how do you get it out into that larger capital base in an efficient way?”

While the bond only provides cover for flooding arising from named storms, either due to storm surge or rainfall, it is a “good test case for the ILS market’s appetite for flood risks,” according to ILS blog Artemis. While “it is not a broad flood coverage, it will likely help to make it more palatable to cat bond investors given their comfort with modeling the probability of named storms, tropical storms and hurricanes.”

“Both public and private sector entities see value from utilizing capital markets’ capacity to manage flood risk,” she says. “We think there are other geographic regions that would be interested in ILS capacity that haven’t yet tapped the ILS markets. Given the recent success of FEMA/NFIP’s FloodSmart Re Series 2018-1 Notes, we expect FEMA/NFIP to continue to utilize ILS capacity (along with traditional reinsurance capital) to support future U.S. flood risk transfer opportunities.”

The ILS sector has grown significantly over the past 15 years, with deals becoming more complex and innovative over time. Many market commentators feel the market was put to the test following the major natural catastrophe losses in 2017. Not only did bonds pay out where they were triggered, fresh capital re-entered, demonstrating investors’ confidence in the sector and its products.

“I’m hearing people starting to coin the phrase that 2018 is the ‘great reload,’” says Seo. “This is something I have been saying for quite some years: That the traditional hard-soft, soft-hard market cycle is over. It’s not that you can’t have an event so large that it doesn’t impact the market, but when it comes to capital markets, high yields are actually a siren call for capital. 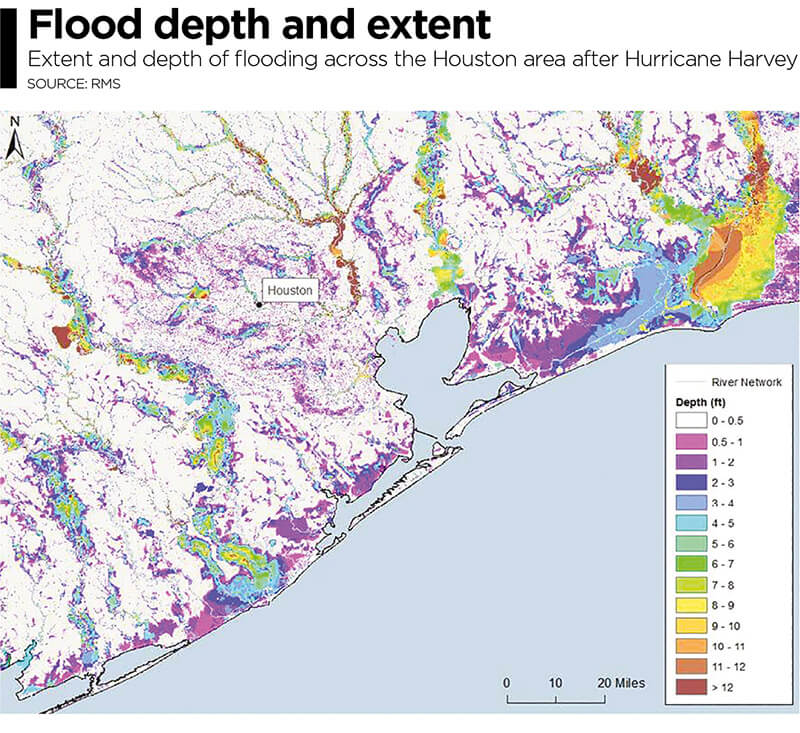 “I don’t think anyone doubts that had 2017 occurred in the absence of the ILS market it would have been a completely different story, and we would have had a traditional hard market scenario in 2018,” he adds.

FloodSmart Re has clearly demonstrated the strong investor interest in such transactions. According to Anger, GC Securities acted as the structuring agent for the transaction and was one of two book runners. More than 35 capital markets investors provided fully collateralized protection to FEMA/NFIP on the landmark catastrophe bond.

“The appetite for new perils is generally strong, so there’s always strong interest when new risks are brought to market,” says Ben Brookes, managing director of capital and resilience solutions at RMS.

He thinks improvements in the underlying data quality along with high-definition flood models make it more likely that inland flood could be included as a peril in future catastrophe bond issuances on behalf of private insurers, on an indemnity basis.

“In the early days of the cat bond market, new perils would typically be issued with parametric triggers, because investors were skeptical that sufficient data quality was achieved or that the indemnity risks were adequately captured by cat models. But that changed as investor comfort grew, and a lot of capital entered the market and you saw all these deals becoming indemnity. Increased comfort with risk modeling was a big part of that.”

The innovative Blue Wings catastrophe bond, which covered insurer Allianz for severe U.K. flood risk (and some U.S. and Canadian quake) and was completed in 2007, is a good example. The parametric bond used an index to calculate flood depths at over 50 locations across the U.K., was ahead of its time and is the only U.K. flood catastrophe bond that has come to market.

According to Anger, as models have become more robust for flood risk — whether due to tropical cyclone (storm surge and excess precipitation) or inland flooding (other than from tropical cyclone) ­— the investor base has been open to trigger selection (e.g., indemnity or parametric).

“In general, insurers are preferring indemnity-triggered solutions,” she adds, “which the ILS market has concurrently been open to. Additionally, for this peril, the ILS community has been open to per occurrence and annual aggregate structures, which gives flexibility to sponsors to incorporate ILS capital in their risk transfer programs.”

As the private market develops, cat bond sponsors from the insurance market would be more likely to bundle inland flood risk in with other perils, thinks Charlotte Acton, director of capital and resilience solutions at RMS. “A degree of hurricane-induced
inland flood risk is already present on a non-modeled basis within some transactions in the market,” she says. “And Harvey illustrates the value in comprehensive modeling of flooding associated with named storms.

“So, for a broader portfolio, in most cases, inland flood would be one piece of the picture as it will be exposed to multiple perils. However, a stand-alone inland flood bond is possible for a public sector or corporate sponsor that has specific exposure to flood risk.”

With inland flood, as with all other perils, sophisticated models help to make markets. “A fund would look at the risk in and of itself in the deal, but of course they’d also want to understand the price and returns perspective as well,” says Brookes. “Models play into that quite heavily. You can’t price a bond well, and understand the returns of a bond, unless you understand the risk of it.”

As the ILS market makes increasing use of indemnity protection through ultimate net loss (UNL) triggers, sophisticated HD flood modeling will be essential in order to transfer the peril to the capital markets. This allows clear parameters to be set around different hours clauses and deductible structures, for instance, in addition to modeling all causes of flood and the influence of local defenses.

“It’s a landmark transaction — the first time in history that the U.S. Federal Government is sponsoring a catastrophe bond”

“Diversification is important for any investment strategy, as you are always trying to minimize the risk of losing large amounts in one go,” she says. “Cat bonds (144A’s) currently have defined perils, but collateralized reinsurance and private cat bonds can cover all perils. Complexities and flow of information to all parties will be a challenge for cat bonds to move from defined perils to UNL all perils.

“Any new peril or structure in a cat bond will generate many questions, even if they don’t have a major impact on the potential losses,” she continues. “Investors will want to know why the issuers want to include these new perils and structures and how the associated risk is calculated. For UNL, all flood (not just sea surge) would be included in the cat bond, so the definition of the peril, its complexities, variables and its correlation to other perils will need to be evaluated and represented in the flood models used.”

She thinks the potential to transfer more flood to the capital markets is there, but that the complexity of the peril are challenges that need to be overcome, particularly in the U.S. “Flood coverage is already starting to move into the capital markets, but there are many issues that need to be worked through before it can be moved to a 144A transaction in a UNL format for many territories,” says Williams. “Just one of the complexities is that flood risk may be covered by government pools.

“To move flood perils from government pools to private insurers is like any evolution, it can take time, particularly if existing coverage is subsidized,” she adds. “For private insurers, the complexity is not just about flood modeling but also about ensuring risk-adequate pricing and navigating through government legislation.”