According to Maurizio Savina and Adrian Mark, flood risk experts at RMS, as much as 80 percent of 1-in-200 year European flood losses that impact the (re)insurance industry result from Pan-European events. Understanding the “spatial correlation” of countries more prone to simultaneous flooding is, therefore, essential in managing accumulations and identifying opportunities to diversify the risk in a portfolio.

In June 2016, the severe floods that affected several European countries are expected to generate claims of up to $1.6 billion for the French market and around $1.4 billion for Germany. This follows Germany’s record year for flood losses in 2013, and a year when total economic losses for flood reached $16.5 billion across central and eastern Europe, of which $4.1 billion was insured.

Those flood events demonstrate how multiple river systems can be affected, impacting more than one country, and lasting for several days or even weeks depending on regional meteo-hydrological conditions. The underlying driver of such broad flooding is often just a single weather system that produces heavy precipitation over
multiple countries.

“SOME NEIGHBORING COUNTRIES SHARING COMMON RIVER BASINS ARE MORE LIKELY TO BE IMPACTED AT THE SAME TIME BY A MAJOR FLOOD.”

In fact, a quarter of major European flood events impact more than one country. And floods simultaneously affecting at least three European countries account for more than 90 percent of tail risk across Europe. These facts underscore the importance of understanding the correlation and diversification of risk across both basins and countries in order to accurately estimate portfolio accumulations and capital requirements. 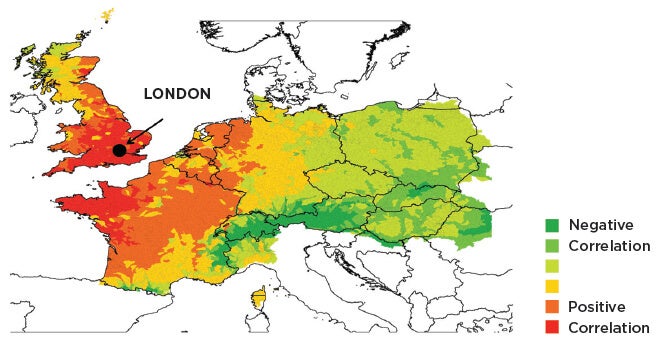 To further emphasize the point, RMS estimates that approximately 20 percent of the 1-in-200 year losses arising from portfolios in Germany and the Czech Republic are from events that impact both countries at the same time. This is a statistically significant level of spatial correlation, and a consideration for (re)insurers when managing their international portfolios. Compared to Germany and the Czech Republic, for other territories spatial correlation can be significantly lower, offering (re)insurers opportunities to diversify their flood risk.

Figure 1 shows the spatial correlation of flood risk between London and all other parts of Europe. The red territories are highly correlated with London and thus more likely to be hit by common events, with yellow-to-green areas not correlated with London and southern England. By using this information a (re)insurer with a portfolio concentrated in southern England could strategically target expansion into central or eastern Europe in order to grow its portfolio while minimizing accumulations of correlated risk.

The gap between economic losses and insured loss for flood events is a global issue. Each new major flood event further stresses the need for greater insurance penetration around the world.

Europe is not immune from the issue. In markets where flood insurance is not bundled into standard insurance policies, such as in Germany, adoption of flood cover is relatively low in comparison to markets like France, Spain and the U.K. While uptake increased marginally in the aftermath of the 2013 floods, there remains a significant opportunity to close the protection gap and improve the country’s flood resilience – with models playing a key role.

“A BIGGER GAP BETWEEN ECONOMIC AND INSURED LOSSES FROM THE JUNE 2016 FLOODS IS EXPECTED IN GERMANY THAN IN FRANCE DUE TO LOWER LEVELS OF FLOOD INSURANCE PENETRATION.”

The success of “nat cat” schemes in these markets is one mechanism with which the industry can assist governments to close the protection gap. The U.K.’s Flood Re initiative is one example of a public-private approach whose aim is to ensure residential properties at a high risk of flood have access to affordable insurance, while lobbying for increased physical resilience through continued investment in flood defenses and mitigation measures.

Catastrophe modeling is essential to the future success of such schemes and to increasing Europe’s flood resilience more generally. Risk transfer and risk mitigation require high-precision modeling across Europe to better understand the impact of Pan-European flooding. But these tools can also be used to understand the importance of investment in flood defenses and inform planning guidelines in flood-prone areas.

RMS Europe Inland Flood High Definition (HD) Models were developed to help the insurance industry and policymakers better evaluate the potential impact of Europe’s flood events through an improved understanding of risk accumulations, ensuring a major event does not have a disproportionate impact on a (re)insurer’s portfolio.

These models simulate hydrology continuously in space and time to reproduce both temporal and spatial correlation of flood risk and offer the largest single Europe-wide event set available on the market, covering 18 river basins and 8,289 catchments over 13 countries.

Maurizio Savina is a senior product manager for the RMS Europe flood models.