“Trump is a joke: why satire makes sense when politics doesn’t.” This was the title of a presentation at the McCourtney Institute for Democracy at Penn State on February 20, 2018. One of the cherished freedoms of democracy is satire. Since Saturday Night Live first aired on NBC in October 1975, all presidents from Ford to Trump, and other prominent public figures, have been targets of merciless satire. Censorship of satire is an affront to democracy. The murder of satirists is terrorism.

Five years ago, on Wednesday, January 7, 2015, the Paris office of the satirical weekly, Charlie Hebdo, was attacked by two Jihadi brothers, Cherif and Said Kouachi, armed with AK-47s. This was the day of the week when the editorial committee met. Of the dozen deaths, eight were Charlie Hebdo staff members, including the fearless editor Stéphane Charbonnier, known as Charb. He had declared he would “… prefer to die standing than live on his knees.” President Hollande condemned this terrorist attack as the most serious in France in more than forty years. Indeed, this event was referred to as France’s 9/11: it was like killing Voltaire. 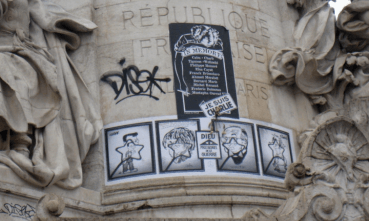 Memorial at the Place de la Republique in Paris. Image credit: Author’s own

A measure of the singular nature of this event was the global response it triggered; not only heavily armed police security in Paris, but also a popular demonstration of millions throughout France, joined by world political leaders, expressing international solidarity against terrorism. The popular slogan, “Je Suis Charlie”, coined spontaneously at a French style magazine, echoed around the world.

At the start of a new decade, democracies are still threatened with acts of terrorist violence, aimed at coercing changes in public policy. These threats can emerge from the far right as well as from Islamists. The hate speech peddled by terrorist groups needs to be vigorously countered by the free press, including satirical publications.

As one of the most notable terrorist attacks in the Western world since 9/11, the attack on Charlie Hebdo has been insightful for affirming the basic principles of terrorism risk modeling. An overarching principle is that terrorist operations follow the path of least resistance. Charlie Hebdo was a prime target because of the global media publicity associated with the brutal assassination of the editorial committee. According to an ISIS doctrine, half of Jihad is media. Charlie Hebdo was also a soft target, having weak security compared with alternative political, economic or military targets.

Another important principle underlying terrorist operations is that too many terrorists spoil the plot. The surveillance profile of a plot is minimized by having as few operatives as possible. Brothers, like the Kouachis (and the Tsarnaev Boston marathon bombers), also have the advantage of a more compact counterintelligence footprint than terrorists from different families.

Since the great majority of terrorist plots against Western democracies are interdicted by the security and law enforcement services, a counterfactual perspective on plots is essential for terrorism risk modeling. This perspective of reimagining history is universal, and applies to any peril, natural or man-made[1]. Carl von Clausewitz, the Prussian master of military strategy, noted that perfecting the art of warfare entails knowing not only what has occurred, but also everything that could have occurred.

On January 7, 2015, the editorial committee of Charlie Hebdo planned to have lunch after their meeting at a local bistro, Les Canailles (Little Rascals). A large table was routinely reserved for them on Wednesdays. This bistro had open public access, unlike the Charlie Hebdo office, so it would have been easy for the two shooters to storm in firing their AK-47s. Through target substitution, this bistro might well have been attacked rather than the Charlie Hebdo office.

Counterfactual thinking such as this is not mere hindsight; it can provide valuable foresight into the future. The vulnerability of Parisian restaurants and cafés was evident. Months later, on Friday, November 13, 2015, six Parisian restaurants were attacked by ISIS terrorists, along with the Stade de France sports stadium and the Bataclan theater.

Knowledge of history is a precious resource for terrorism risk modelers. Most attacks have either happened before – or might have happened before. For insurers as well as civic authorities and businesses, strategic surprise can be avoided by reimagining history.