Camp and Woolsey Fires: A Historical and Numerical Perspective

At the time of writing, the recent Camp and Woolsey Fires in California have burned a combined total of 245,000 acres (93,000 hectares) — an area about the size of Dallas. These fires have destroyed more than 12,000 homes and businesses, and killed 80 civilians. Ordinarily these would be called extreme events. But these are not ordinary times. After back-to-back record breaking wildfire seasons, including the Wine Country fires (US$11 billion) and Southern California Fires (US$2.3 billion) in 2017, and the Carr Fire (~US$1.2 billion) and Mendocino Complex fires (~US$200 million) this year in July, California Governor Jerry Brown perfectly summed up the current situation in his state: “This is the new abnormal.”

As firefighters make continuing progress on containment of both fires, the California Department of Forestry and Fire Protection (CAL FIRE) is quickly assembling an inventory of each burned structure, to detail the extent of the damage. Based on this data, plus a simulated reconstruction of the event’s wind, moisture, fuel, and fire spread parameters, RMS estimates the insured damage at between US$7.5 billion and US$10 billion for the Camp Fire, and US$1.5 billion and US$3 billion for the Woolsey Fire. This estimate accounts for burn and smoke damage; structure, contents, business interruption (BI), and additional living expenses (ALE) payouts; damage to autos; and modest post loss amplification (PLA) that may result from surges in labor costs, ordinance and law endorsements, and related coverage extensions.

Physical Similarities and Differences Between the Camp and Woolsey Fires

The fires did have some different distinguishing characteristics and impacts. The Camp Fire started in Plumas National Forest in a narrow, mountainous river valley and quickly spread to the town of Paradise, feeding largely on timber from the dense conifer forests. At its most ferocious point, the Camp Fire grew at unprecedented rate of more than a football field per second. This rapidity, combined with the limited points of egress from the town of Paradise, California, and a high proportion of elderly residents who were potentially less able to quickly evacuate, likely contributed to the devastating fatality count, which currently stands at 77.

The Woolsey Fire, by contrast, ignited in arid Ventura County and, aided by gusty Santa Ana winds, burned through shrubland (in particular, the native chaparral, with tinderbox-like flammability), through a narrow canyon towards the Pacific Ocean, and into Malibu (pop. ~13,000). 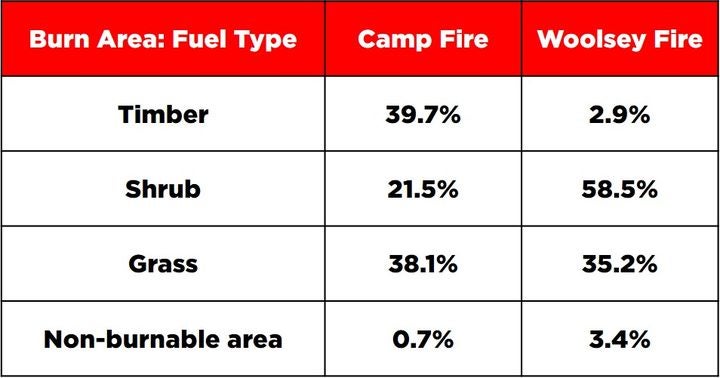 Three things stand out about the Woolsey Fire. First, the high value of homes impacted, particularly in Malibu, where the median home values are almost US$3 million. Second, the volume of evacuations (estimated at 265,000) due to the population density. These evacuations are sure to result in many insurance claims for additional living expenses (ALE) and Business Interruption (BI), and they underscore the importance of high-resolution heat, ember, and smoke modeling that can lead to damages far beyond the burn perimeter. Third, the extensive firefighting efforts on the ground (3,700 personnel) and in the air, with heroics such as sucking water out of swimming pools by helicopter to accelerate the suppression.

Fire Zoning and the Wildland-Urban Interface

Urban planning for wildfire relies largely on the zoning established by the Wildland-Urban Interface (WUI), which designates high-risk zones in populated areas, much in the same way that the Federal Emergency Management Agency (FEMA) designates high risk flood zones.

The WUI is defined in two ways, as described by the University of Wisconsin-Madison: Intermix, where housing and vegetation intermingle, and Interface, where houses are in close proximity to the wildlands. The latter is susceptible to wildfires that spill over into neighborhoods. The former is likely to find itself in the middle of a fire. 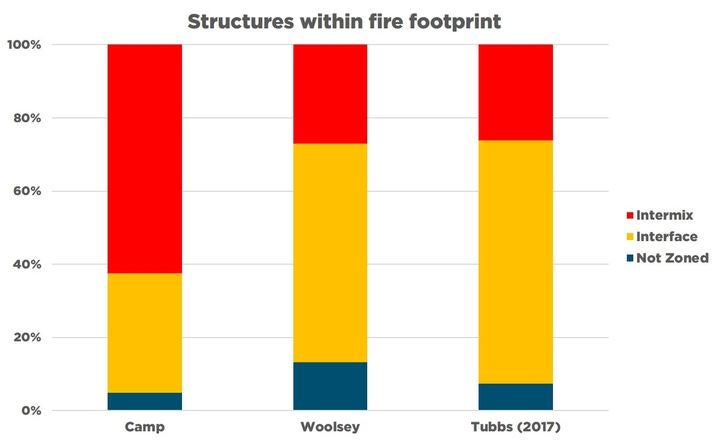 The ferocity of the Camp Fire may be partly attributed to the area’s dense vegetation, where most of the structures are designated as ”intermix.” In fact, a survey of pre-event imagery revealed that many of the structures impacted by the Camp Fire were surrounded on all sides by heavy vegetation. By contrast, the Woolsey and Tubbs fires burned predominantly in the less vegetated “interface” areas.

The Fires in Historical Context

There is a natural tendency to view any catastrophic event as an outlier, a one-time occurrence that is to be analyzed and hopefully learned from. But this is not case with the Camp and Woolsey Fires. 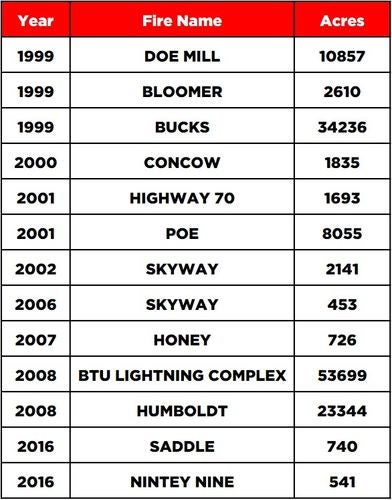 The town of Paradise, California, which suffered the worst losses of the Camp Fire, has narrowly avoided catastrophic wildfires many times over the past 20 years.  In fact, 13 large fires since 1999 burned inside the current footprint of the Camp Fire. In this historical context, wildfire damage to Paradise is not surprising.

The area around the Woolsey Fire shares a similar, if less stark, history of frequent fires. Six large fires since 1999 intersect the Woolsey footprint. Going back to 1993, the Old Topanga Wildfire, which caused almost US$1 billion in today’s dollars, happened immediately to the south of where Woolsey is burning today. 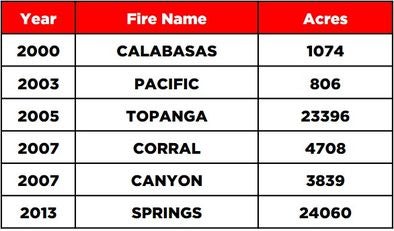 If there is any silver lining to these devastating events, it is that they will force a dialogue on the reality of living with wildfire risk and how to mitigate it. Given that the right stakeholders get involved, this dialogue can lead to higher awareness of the risk and ultimately, meaningful positive changes in mitigation practices and fire safety. And as we have seen from the past 20 years’ of wildfire activity, this dialogue is long overdue.

Current actions in the State do not seem to go far enough. Governor Brown signed a package of wildfire-related measures just a couple of months ago in late September, including exploring the market for timber in an effort to thin-out overly dense forests in the State. With the escalating human and financial costs of these fires, more drastic action is needed.

Now that we face increasing temperatures, more extreme weather conditions, and growing exposure in high risk areas, for insurers, regulators, and community leaders, surely this is the time to unite with a common focus on wildfire risk and fire resiliency.