The recent allegations against General Electric (GE) read like a financial thriller: Bernie Madoff whistle-blower teams up with anonymous hedge fund to expose the alleged financial misdeeds of one of the most recognizable brands in American history.

But most people’s interest in this story ends abruptly when they hear about the crux of the allegations, which can be summarized in eight words: “… inadequate loss reserves for long term care (re)insurance.” This topic is esoteric at best, and sleep-inducing at worst. It’s impossible to spin into media clickbait. And it’s clear that media is struggling to describe exactly what Harry Markopolos, the whistle-blower, is alleging in his 175 page report.

So, in this blog post I’m going to give it a shot in my own words, and as a reward for my work, a mention of my company’s excellent products at the end of the article (this is a corporate blog, after all).

First, about myself: I cut my teeth in the insurance industry at a workers’ compensation startup, which was acquired by Blue Cross Blue Shield of Michigan. Workers’ comp is considered a “long tail” line of business, meaning that the time elapsed between collecting premium and paying claims can be long. For example: if a business buys a workers’ compensation policy and its employee sustains a serious injury, the claim could last years (or even decades), leaving the insurer paying claims long after the policy expires.

This “long tail” issue is at the center of GE’s predicament. In Long-Term Care (LTC) Insurance, the average age of the insured at the time of policy issuance is 55, but the average age of a claimant is 80. That’s a whopping 25 years between when the policy is sold, and the claim is filed. Imagine you are an insurance executive, going to work every day with the knowledge that the policies you write won’t experience a claim for more than 25 years.

This fact might give rise to the wrong incentives, such as underpricing the coverage by ignoring the increases in longevity and healthcare cost. This would lead to higher policy sales and higher bonuses, promotions, awards, and industry recognition. So how does the insurance industry (and the regulators) prevent this from happening, and keep these incentives in check?

In a word: actuaries. Actuaries are the statistical wizards of the insurance industry, and one of their jobs is to project an insurer’s claims obligations very far into the future. I won’t pretend to understand the arcane and complex things they do to achieve this, but suffice to say every year they must put their signature to a statement of actuarial opinion, attesting that an insurer’s loss reserves are reasonable. The analysis leading to this is a serious undertaking and it puts the actuary’s name, reputation, and credentials on the line. (As with an accountant when blessing a company’s financial statements).

In Mr. Markopolos’ report, he alleges that the company actuaries “… are getting paid by GE, so of course they’ll never question GE’s Long-Term Care reserves.” That’s a bold accusation, and unfortunately it will take years to determine its accuracy. In the meantime, GE’s loss reserves will be the subject of considerable investigation.

The uncertainty in loss reserving can be tremendous, particularly in lines of insurance whose profitability depends on long-term mortality assumptions such as life and long-term care. Today’s loss reserves might be adequate, but what if an incurable epidemic emerges 10 years from now? What if we cure cancer?  What if lifestyles change unpredictably? The impact of these future developments simply cannot be measured with an insurer’s claims experience.  And that is why RMS developed its LifeRisks Solution Suite, enabling insurers to measure the impact of future improvements in longevity across five categories that affect longevity we call “vitagions”:

1. Lifestyle trends: Personal decisions like smoking habits, diet and exercise which have a strong influence on mortality levels.

Projecting future medical improvement is challenging because it is random. It is impossible to know when the next game-changing discovery will occur, or what form it will take – but this can be informed by research and scientific study about technology, medicine, and lifestyle. In order to account for this randomness, leading scientists from RMS built an event set representing the ways each vitagion could affect longevity, then built a simulation engine that sampled from that event set. Finally, RMS modeled the likelihood and time it would take these changes to impact longevity. The result is some very good insight into the range of scenarios an insurer could face, and the ability to act on those scenarios.

There’s a joke in the actuarial community about a junior analyst who, when pressed to defend his loss projections, responded that he “pulled them from the ‘multi-year actuarial support system’.” The clever acronym embedded in this joke sometimes elicits a chuckle. But the joke’s underlying message is about the purpose of actuarial science: to be precise about imprecision, to quantify uncertainty, and to capture the range of possible loss outcomes. There is a large and growing body of scientific research that can help accomplish this – and risk models must leverage this science to help insurers better understand their long-term risks and to insulate themselves against the kinds of allegations that GE is now facing. 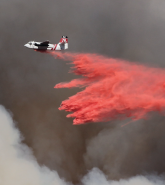