Describing the scale and savagery of the wildfires currently burning in California is difficult to do, but a simple recounting of the statistics is a good starting point. They are thus:

At the time of writing, fifteen wildfires are now burning more than 280,000 acres (~113,000 hectares) in California. Collectively, they have laid waste to almost 7,000 homes and businesses. 31 people have died in the fires. 300,000 more were evacuated. 12,000 firefighters are working the front lines, making admirable progress at containment.

The biggest of these events, the  Camp Fire  (named for the road of its point of origin) is the most destructive wildfire in history, with 6,700 structures burned. During a period of particularly intense wind, it spread at a rate of more than one football field per second. Entire towns in its path are effectively destroyed.

First reported by CALFIRE on the afternoon of Thursday, November 8, the Camp Fire started on the edge of the Plumas National Forest in a picturesque stretch of the northern Sierra Nevada mountain range, about three hours’ drive north of Sacramento. Initial reports suggest that downed power lines due to high winds may have caused the fire, and it spread quickly in the first 12 hours. As the situation currently stands, the death toll is 31 — mostly from people overwhelmed while trying to flee in their cars or on foot.

For numerical context: the Camp Fire will rank comfortably at the top of CALFIRE’s top 20 most destructive wildfires document, a list of impressively extreme events which is soon to be revised.  The event will be a large insurance loss that will add to earnings pressure after wildfire losses suffered in 2018 (Carr, Mendocino Complex) and 2017 (Tubbs, Atlas, Thomas).

Firefighters in Southern California are working to contain two large events in close proximity: the Woolsey and  Hill  Fires, which triggered 250,000 evacuations, and whose firefighting efforts have been hampered by strong Santa Ana winds from the mountains. The Woolsey Fire has burned many well-publicized landmarks and neighborhoods, and at the time of this writing, 177 structures have been destroyed and two fatalities recorded.

Fire Behavior and the Models

From a scientific perspective, these fires did not behave in unexpected ways given the conditions at the time of ignition: dry climate, low vegetation moisture, and prolonged intense seasonal winds. The fires spread quickly after their ignitions and accumulated burning embers. These embers were lofted into the air, causing long-range spotting that enabled the fires to jump wide highways and cause damage far beyond the flaming fronts.

The wide dispersion of smoke was a noticeable feature of the fires in many highly populated areas of California. The smoke is sure to result in many insurance claims for evacuation, business interruption, and contents damage; this author spent the weekend indoors due to unhealthy air quality in the Bay Area, more than 200 miles away from the Camp Fire. 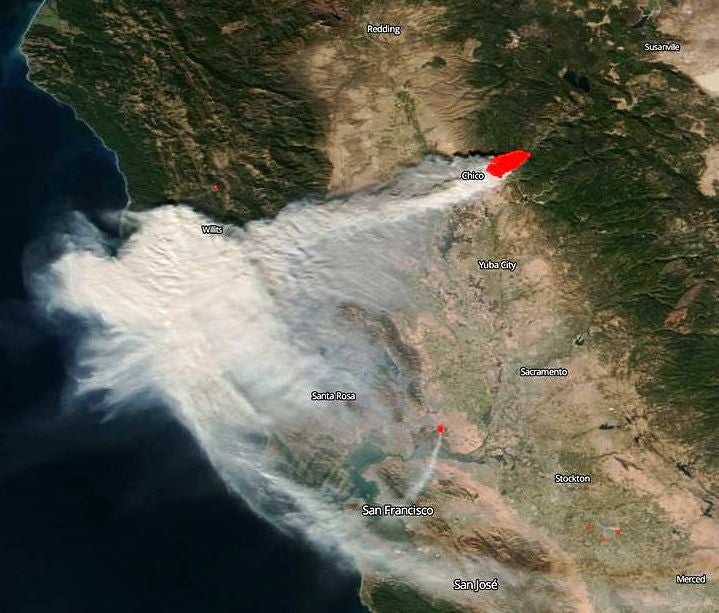 The upcoming RMS® U.S. Wildfire HD Model, part of the RMS North America Wildfire HD Models suite carries a comprehensive fire catalog spanning the Continental U.S. and Canada whose footprints explicitly account for ember, smoke, and urban conflagration. These fire characteristics can greatly impact the exceedance probability curve of the wildfire peril, and they must be accounted for in a probabilistic fashion.

Wildfires and the Future

With notable exceptions, wildfires did not cause significant losses for a 30-year period from 1960 to 1990. The Oakland Hills fire (1991) changed this, and since 2000 there have been six additional wildfires topping US$1 billion in insured damage (not including the Camp Fire). Many are asking: why is this happening?

Providing a single definitive answer to this question is difficult, but three factors definitely contribute. First, a 40 percent increase in the amount of housing units between 1990 and 2010 in the Wildland Urban Interface, the highest risk area of the U.S for wildfire; second, a century of firefighting philosophy (from 1910 until the early 2000s) that perhaps favored aggressive firefighting over aggressive control of flammable vegetation; and third, a changing climate with increasing temperatures and more extreme weather conditions.

The impact of these factors is not likely to change any time soon. Wildfire risk will remain high, and exposure in high risk areas will continue to grow. During a recent wildfire documentary, CALFIRE chief Ken Pimlott remarked that “…we are experiencing now the fires of the future.” The sophistication of wildfire risk management data, models, and tools must follow suit and adapt to this changing reality.