Earthquakes in Oklahoma: An Update on Induced Seismicity Hazard and Risk for 2018

During 2017, Oklahoma and southern Kansas experienced Mw 3+ earthquakes more frequently than in California. Although the annual count of earthquakes in the Oklahoma/Kansas area has declined since peaking in 2015, the rate of earthquake occurrence is still extremely high. More than 50 events (Mw 3+) have occurred since the start of 2018, including events of Mw 4.6 and Mw 4.5 during the first weeks of April, with shaking strong enough to be felt in Oklahoma City.

In Oklahoma and other parts of the Central and Eastern United States, research studies have linked the increased occurrence of earthquakes to oilfield wastewater injection. Damage has mostly been minimal, but the ground shaking occurring from events greater than or equal to Mw5 could have produced extensive damage had comparable events occurred in more greatly populated areas of the state.

In 2016, the United States Geological Survey (USGS) released their first short-term forecast for seismic hazard — this was meant to capture the increased (but potentially transient) nature of this hazard, and the forecast emphasized that the seismic hazard in Oklahoma is comparable to that of California. Since the first one-year forecast in 2016, the USGS has released subsequent forecasts for 2017 and now for 2018. Click here to visit to the USGS site for more on these three forecasts.

Here are some key observations and takeaways from the 2018 USGS forecast and ongoing seismicity in Oklahoma:

2. Areas of highest hazard identified in the USGS forecasts for 2016 and 2017 corresponded with the locations of earthquakes greater than or equal to Mw4 in those years — so the forecasts have been pretty useful for highlighting regions likely to experience larger earthquakes.

3. Lowered injection rates due to regulatory requirements have generally corresponded with decreased hazard where significant (greater than or equal to Mw5) earthquakes occurred in 2016 (no events greater than or equal to Mw5 occurred in 2017). However, hazard has increased in the region around Oklahoma City. Because risk is based on the intersection between hazard and exposure, statewide induced seismicity risk has increased.

Earthquake hazard and risk in Oklahoma remains high and geographically complex. The maximum magnitude event expected from induced seismicity in Oklahoma is highly uncertain — historically Oklahoma earthquakes have been limited to high magnitude 5 — but even a Mw5.8 close to Oklahoma City would likely result in significant loss.

Further into 2018, RMS will release a Version 18 update to the Version 17 RMS® North America Earthquake models that will provide an updated outlook on induced seismicity risk in the United States. This update uses earthquake data through the end of 2017, as does the latest USGS forecast. 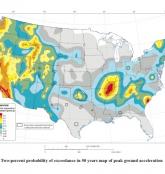 How Should Man-made Earthquakes be Included in Earthquake Hazard Models?

Deborah works on earthquake source modeling with a focus on North America and South America and led the development of the U.S. Induced Seismicity model. She joined RMS in 2014 after postdoctoral research on mining-induced earthquakes. Deborah holds a bachelor’s degree in Physics and a PhD in Geophysics, both from University of California, San Diego.