We’re Still All Wondering – Where Have All The Hurricanes Gone?

The last major hurricane to make landfall in the U.S. was Hurricane Wilma, which moved onshore at Cape Romano, Florida, as a Category 3 storm on October 24, 2005. Since then, a decade has passed without a single major U.S. hurricane landfall—eclipsing the old record of eight years (1860-1869) and sparking vigorous discussions amongst the scientific community on the state of the Atlantic Basin as a whole.

Research published in Geophysical Research Letters calls the past decade a “hurricane drought,” while RMS modelers point out that this most recent “quiet” period of hurricane activity exhibits different characteristics to past periods of low landfall frequency.

Unlike the last quiet period—between the late 1960s and early 1990s—the number of hurricanes forming during the last decade was above average, despite a below average landfall rate.

According to RMS Lead Modeler Jara Imbers, these two periods could be driven by different physical mechanisms, meaning the current period is not a drought in the strictest sense. Jara also contends that developing a solid understanding of the nature of the last ten years’ “drought” may require many more years of observations. This additional point of view from the scientific community highlights the ongoing uncertainty around governing Atlantic hurricane activity and tracks.

Among the models contributing to the MTR forecast are “shift” models, which support the theory of cyclical hurricane frequency in the basin. This was recently highlighted by commentary published in the October 2015 edition of Nature Geosciences and in an associated blog post from the Capital Weather Gang, speculating whether or not the active period of Atlantic hurricane frequency, generally accepted as beginning in 1995, has drawn to a close. This work suggests that the Atlantic Multidecadal Oscillation (AMO), an index widely accepted as the driver of historically observed periods of higher and lower hurricane frequency, is entering a phase detrimental to Atlantic cyclogenesis.

Our latest model update for the RMS North Atlantic Hurricane Models advances the MTR methodology by considering that a shift in activity may have already occurred in the last few years, but was missed in the data. This possibility is driven by the uncertainty in identifying a recent shift point: the more time that passes after a shift and the more data that is added to the historical record, the more certain you become that it occurred.

The AMO has its principle expression in the North Atlantic sea surface temperatures (SST) on multidecadal scales. Generally, cool and warm phases last for up to 20-40 years at a time, with a difference of about 1°F between extremes. Sea level pressure and wind shear typically are reduced during positive phases of the AMO, the predominant phase experienced since the mid-1990s, supporting active periods of Atlantic tropical cyclone activity; conversely, pressure and shear typically increase during negative phases and suppress activity.

As such, low Category 3-5 counts over many consecutive years and recent changes in the internal variability within the SST time series may point to a potential shift in the Atlantic Basin activity cycle.

Any uncertainty in tropical cyclone processes is considered through the “shift” models and the other RMS component models, based on competing theories related to historical and future states of hurricane frequency.

Given the interest of the market and the continuous influx of new science and seasonal data, RMS reviews its medium-term rates regularly to investigate whether this new information would contribute to a significant change in the forecast.

If we continue to observe below average tropical cyclone formation and landfall frequency, a shift in the multidecadal variability will become more evident, and the forecasts produced by the “shift” models will decrease. However, it is mandatory that the performance and contribution of these models relative to the other component models are considered before the final MTR forecast is determined.

This post was co-authored by Jeff Waters and Tom Sabbatelli. 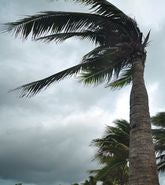