Delhi, India also at high risk of earthquakes from the same collision zone

The earthquake in Nepal is very much a developing story. However, based on what we know, it’s shaping up to be the worst natural disaster this calendar year, particularly because Nepal is remote, economically challenged, and not resilient to an earthquake of this magnitude. The ground shaking appears to have been stronger in Kathmandu than the 1934 earthquake, possibly making it the largest we’ve seen in Nepal in almost a century.

As of April 29, Time Magazine reports that the death toll has crossed 5,000. It’s expected that casualties could surpasses 10,000, as rescue efforts continue.

While it is too early to draw substantial conclusions about the disaster—and the final casualty number—we are able to share some insight into the event and risk in the area: 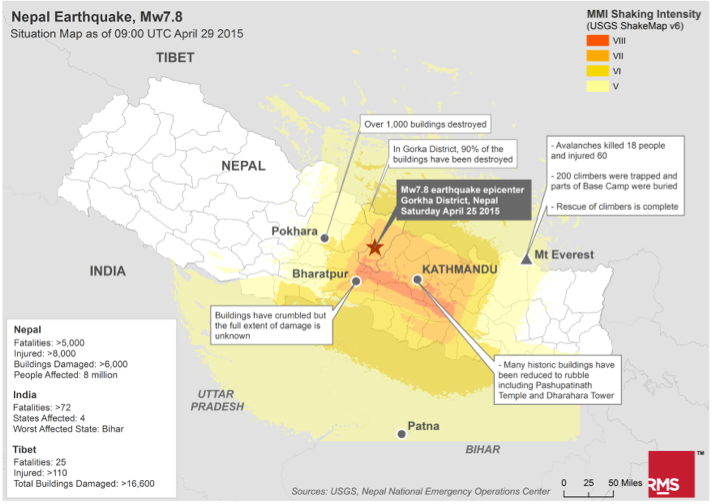 Most large earthquakes in this region occur along the plate boundary collision zone:

In this region, the Indian continent dips beneath the Tibetan plateau. The Himalayan mountain chain and Everest are products of this collision zone, and the area at risk stretches from Assam and southern Bhutan to the east through Nepal to the mountains of northern Pakistan in the west. The magnitude 7.6 earthquake in Kashmir in 2005, which caused terrible damage to villages either side of the Pakistan-India border resulting in 86,000 fatalities, occurred along this plate boundary.

Nepal’s fragile economy will be affected:  Nepal is one of the world’s poorest countries. The country’s main revenue sources are agriculture and tourism, including foreigners looking to scale Mount Everest. Reports indicate that the damage caused in recent days could substantially set back the economy of Nepal.

Kathmandu was hit hardest:The fault rupture of the Nepal earthquake extended eastward from its epicenter, passing underneath the city of Kathmandu.

Historic buildings throughout the city have been reduced to rubble. Darbar Square, which attracts millions of tourists annually and is vital for the Nepalese economy, has been razed. An overwhelming majority of homes in what’s known as the Gorkha district have been destroyed. Furthermore, many villages in the region needing assistance are in mountainous areas, making rescue efforts difficult.

Structures in Nepal were already at risk: The Nepalese population resides in unreinforced masonry structures that are highly vulnerable to earthquake ground shaking. Secondary hazards are of concern as well—including landslides and liquefaction.

The widespread damage to infrastructure will be a significant setback for Nepal, which relies on agriculture and tourism. Organizations such as Build Change are already on site helping affected communities to start rebuilding their homes using disaster-resistant designs to increase the country’s resilience to future earthquakes. If you would like to support Build Change’s work, you can donate to their fund by clicking here.

Delhi, India is at high risk of earthquakes from the same collision zone

Between Gujarat and the Himalayas lies the mega-city of Delhi, which is exposed to significant earthquake risk from the surrounding plate movement. 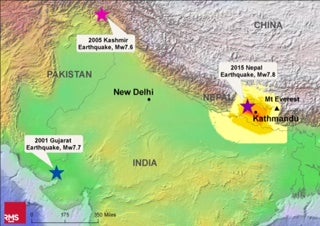 Delhi’s seismic risk comes from both the Himalayan thrust zone, where the recent Nepal earthquake struck, and the transition zone between the stable continent and the active plate boundary—also the site of the 2001 M7.7 Gujarat earthquake, which resulted in 20,000 fatalities.

According to the Bureau of Indian Standards’ seismic zoning map, Delhi is within a “high seismic risk zone.” Combined with an older building stock made of unreinforced masonry and reinforced concrete, the city’s people, buildings, and economy are at significant risk.

Projects piloting risk reduction in the city—through building retrofits or enhanced building inspections—have been underway and offer some degree of comfort that the seismic risk issues in Delhi are being acknowledged.

We will continue to monitor the situation in Nepal. If you have questions about the disaster please feel free to ask them in the comment section. 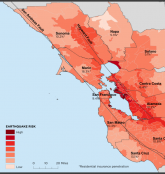 Twenty Years After Northridge: a Seismic Blink, or an Eternity?

January 17, 2014 marks the 20th anniversary of the M6.7 Northridge, California Earthquake, which caused the largest U.S. earthquake insurance loss to date. Similar to many of my RMS Californian colleagues, I recall clearly when the event occurred. I was working as a structural engineer in San Francisco, and we in the earthquake engineering community responded to the call to assess building and infrastructure damage. When the dust finally settled 18 months later, the full picture of damage and loss emerged, and losses were dramatically higher than when first assessed. Direct economic loss reached $40 billion and insured loss totaled $12.5 billion, the majority from commercial and residential lines of business. It was an industry-changing event for the catastrophe modeling and insurance industry, as well as the broader earthquake engineering community. Lessons Learned The Northridge Earthquake overturned a number of previous assumptions on earthquake science and engineering. The earthquake occurred on a previously unrecognized fault—a blind thrust fault—beneath the highly populated San Fernando Valley. This triggered urgent research to identify other blind thrust faults underlying the Los Angeles Basin and the San Fernando Valley, as well as other areas of California. These hidden faults were incorporated into the 2002 version of the U.S. National Seismic Hazard Maps. The shaking also revealed new information around the vulnerability of certain classes of engineered buildings, in particular unanticipated welding failures at the beam-column connections of steel moment-resisting frame structures (SMRFs). This damage initiated the multi-year and multi-disciplinary SAC steel project, which investigated various repair techniques and new design approaches to minimize damage to SMRFs in future earthquakes. The earthquake also overturned a number of assumptions on earthquake insurance risk management in California. Up until this point, the standard method of managing the risk was to employ a “probable maximum loss” approach that focused on the accumulation of insured exposure across the whole Los Angeles Basin. Within the accumulation zone, the dominant risk was assumed to come from commercial structures. However, the majority of insured loss from the Northridge event actually came from residential properties—although residential damage was not extreme, the repairs proved very costly. When the magnitude of the residential losses prompted insurers to restrict sales of homeowners coverage, the California legislature established the California Earthquake Authority (CEA), a publicly managed, privately financed entity, to provide coverage. In 1996, the CEA opened its doors for business and residential insurers could opt into the program. The majority of the California homeowners insurance market joined the CEA, and the aggregate share (of 70%) has changed little over time. However, the current take-up rate of residential earthquake coverage in California remains historically low—at approximately 10%. The CEA continues to explore ways to increase the take-up rates, as insurance is a crucial element in the recovery of an area and the reduction in federal aid assistance following a major California earthquake. Risk Reduction Strategies To commemorate the 20th anniversary, the earthquake engineering community is gathering in Southern California at the Northridge 20 Symposium. Local community leaders, emergency managers, financial insurance industry professionals, and scientists, and others are coming together not only to celebrate the achievements in risk reduction and management over the past 20 years, but also to determine how to become more resilient to earthquake damage moving forward. There are various strategies around reducing the impacts of the next Southern California earthquake. These include the development and enforcement of seismic design provisions in building codes, widespread adoption of seismic strengthening techniques (e.g., to unreinforced masonry commercial buildings and older wood frame residential structures), and responsible land-use planning informed by accurate earthquake hazard information. For example, the California Geological Survey (CGS) recently issued preliminary versions of new Alquist-Priolo Earthquake Fault Zone Maps for the Los Angeles region. Within Alquist-Priolo fault zones, construction of certain structures is prohibited to reduce damage and loss of life in a future earthquake. The new maps place the Hollywood Fault in an Alquist-Priolo zone, with major consequences for the potential redevelopment of Hollywood and in particular the value of some key land parcels. Twenty years have elapsed since the Northridge Earthquake—and the industry has seen 20 years of relatively loss-free earthquake experience in California. In the most seismically active region of the U.S., a gap of 20 years—though a blink in geologic time—is an eternity for some consumers who increasingly question the cost of their earthquake insurance premiums. While the timing, location, and severity of the next major California earthquake are uncertain, the next major California earthquake is a certainty. We must remain vigilant in building a culture of prevention to reduce the impacts from this inevitable event.…