Severe convective storms (SCS) have driven U.S. insured catastrophe losses in recent years with both attritional and major single-event claims now rivaling an average hurricane season. EXPOSURE looks at why SCS losses are rising and asks how (re)insurers should be responding

At the time of writing, 2019 was already shaping up to be another active season for U.S. severe convective storms (SCS), with at least eight tornadoes daily over a period of 12 consecutive days in May. It was the most May tornadoes since 2015, with no fewer than seven outbreaks of SCS across central and eastern parts of the U.S. According to data from the National Oceanic and Atmospheric Administration (NOAA), there were 555 preliminary tornado reports, more than double the average of 276 for the month in the period of 1991-2010.

According to the current numbers, May 2019 produced the second-highest number of reported tornadoes for any month on record after April 2011, which broke multiple records in relation to SCS and tornado touchdowns. It continues a trend set over the past two decades, which has seen SCS losses increasing significantly and steadily. In 2018, losses amounted to US$18.8 billion, of which US$14.1 billion was insured. This compares to insurance losses of US$15.6 billion for hurricane losses in the same period. While losses from SCS are often the buildup of losses from multiple events, there are examples of single events costing insurers and reinsurers over US$3 billion in claims. This includes the costliest SCS to date, which hit Tuscaloosa, Alabama, in April 2011, involving several tornado touchdowns and causing US$7.9 billion in insured damage. The second-most-costly SCS occurred in May of the same year, striking Joplin, Missouri, and other locations, resulting in insured losses of nearly US$7.6 billion.

According to RMS models, average losses from SCS now exceed US$15 billion annually and are in the same range as hurricane average annual loss (AAL), which is also backed up by independently published scientific research. “The losses in 2011 and 2012 were real eye-openers,” says Rajkiran Vojjala, vice president of modeling at RMS. “SCS is no longer a peril with events that cost a few hundred million dollars. You could have cat losses of US$10 billion in today’s money if there were events similar to those in April 2011.”

Nearly a third of all average annual reported tornadoes occur in the states of Texas, Oklahoma, Kansas and Nebraska, all states that are within the “Tornado Alley.” This is where cold, dry polar air meets warm, moist air moving up from the Gulf of Mexico, causing strong convective activity. “A typical SCS swath affects many states. So the extent is large, unlike, say, wildfire, which is truly localized to a small particular region,” says Vojjala.

Research suggests the annual number of Enhanced Fujita (EF) scale EF2 and stronger tornadoes hitting the U.S. has trended upward over the past 20 years; however, there is some doubt over whether this is a real meteorological trend. One explanation could be that increased observational practices simply mean that such weather phenomena are more likely to be recorded, particularly in less populated regions.

According to Juergen Grieser, senior director of modeling at RMS, there is a debate whether part of the increase in claims relating to SCS could be attributed to climate change. “A warmer climate means a weaker jet stream, which should lead to less organized convection while the energy of convection might increase,” he says. “The trend in the scientific discussion is that there might be fewer but more-severe events.”

Claims severity rather than claims frequency is a more significant driver of losses relating to hail events, he adds. “We have an increase in hail losses of about 11 percent per year over the last 15 years, which is quite a lot. But 7.5 percent of that is from an increase in the cost of individual claims,” explains Grieser. “So, while the claims frequency has also increased in this period, the individual claim is more expensive now than it was ever before.” 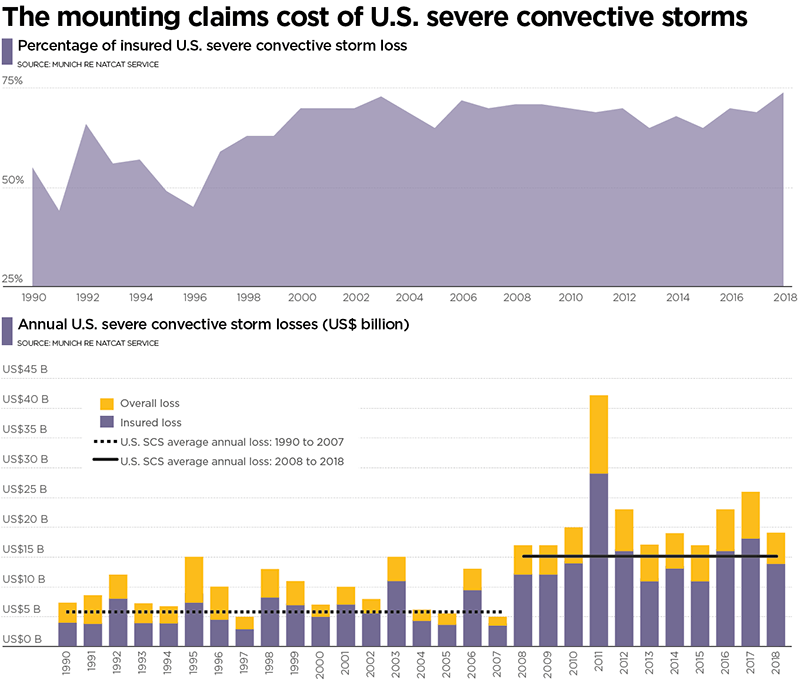 Claims go ‘Through the Roof’

Another big driver of loss is likely to be aging roofs and the increasing exposure at risk of SCS. The contribution of roof age was explored in a blog last year by Stephen Cusack, director of model development at RMS. He noted that one of the biggest changes in residential exposure to SCS over the past two decades has been the rise in the median age of housing from 30 years in 2001 to 37 years in 2013.

A changing insurance industry climate is also a driver for increased losses, thinks Vojjala. “There has been a change in public perception on claiming whereby even cosmetic damage to roofs is now being claimed and contractors are chasing hailstorms to see what damage might have been caused,” he says. “So, there is more awareness and that has led to higher losses.

“The insurance products for hail and tornado have grown and so those perils are being insured more, and there are different types of coverage,” he notes. “Most insurers now offer not replacement cost but only the actual value of the roofs to alleviate some of the rising cost of claims. On the flip side, if they do continue offering full replacement coverage and a hurricane hits in some of those areas, you now have better roofs.”

How insurance companies approach the peril is changing as a result of rising claims. “Historically, insurance and reinsurance clients have viewed SCS as an attritional loss, but in the last five to 10 years the changing trends have altered that perception,” says Vojjala. “That’s where there is this need for high-resolution modeling, which increasingly our clients have been asking for to improve their exposure management practices.

“With SCS also having catastrophic losses, it has stoked interest from the ILS community as well, who are also experimenting with parametric triggers for SCS,” he adds. “We usually see this on the earthquake or hurricane side, but increasingly we are seeing it with SCS as well.”