Managing the Next Financial Shock

EXPOSURE reports on how a pilot project to stress test banks’ exposure to drought could hold the key to future economic resilience.

here is a growing recognition that environmental stress testing is a crucial instrument to ensure a sustainable financial system. In December 2016, the Task Force on Climate-related Financial Disclosures (TCFD) released its recommendations for effective disclosure of climate-related financial risks.

“This represents an important effort by the private sector to improve transparency around climate-related financial risks and opportunities,” said Michael Bloomberg, chair of the TCFD. “Climate change is not only an environmental problem, but a business one as well. We need business leaders to join us to help spread these recommendations across their industries in order to help make markets more efficient and economies more stable, resilient and sustainable.”

Drought is a significant potential source of shock to the global financial system. There is a common misconception that sustained lack of water is primarily a problem for agriculture and food production. In Europe alone, it is estimated that around 40 percent of total water extraction is used for industry and energy production (cooling in power plants) and 15 percent for public water supply. The main water consumption sectors are irrigation, utilities and manufacturing.

The macro-economic impact of a prolonged or systemic drought could therefore be severe, and is currently the focus of a joint project between RMS and a number of leading financial institutions and development agencies to stress test lending portfolios to see how they would respond to environmental risk.

“Practically every industry in the world has some reliance on water availability in some shape or form,” states Stephen Moss, director, capital markets at RMS. “And, as we’ve seen, as environmental impacts become more frequent and severe, so there is a growing awareness that water — as a key future resource — is starting to become more acute.”

“So the questions are: do we understand how a lack of water could impact specific industries and how that could then flow down the line to all the industrial activities that rely on the availability of water? And then how does that impact on the broader economy?” he continues. “We live in a very interconnected world and as a result, the impact of drought on one industry sector or one geographic region can have a material impact on adjacent industries or regions, regardless of whether they themselves are impacted by that phenomenon or not.”

This interconnectivity is at the heart of why a hazard such as drought could become a major systemic threat for the global financial system, explains RMS scientist, Dr. Navin Peiris. “You could have an event or drought occurring in the U.S. and any reduction in production of goods and services could impact global supply chains and draw in other regions due to the fact the world is so interconnected.”

The ability to model how drought is likely to impact banks’ loan default rates will enable financial institutions to accurately measure and control the risk. By adjusting their own risk management practices there should be a positive knock-on effect that ripples down if banks are motivated to encourage better water conservation behaviors amongst their corporate borrowers, explains Moss.

“The expectation would be that in the same way that an insurance company incorporates the risk of having to payout on a large natural event, a bank should also be incorporating that into their overall risk assessment of a corporate when providing a loan – and including that incremental element in the pricing,” he says. “And just as insureds are motivated to defend themselves against flood or to put sprinklers in the factories in return for a lower premium, if you could provide financial incentives to borrowers through lower loan costs, businesses would then be encouraged to improve their resilience to water shortage.”

In May 2016, the Natural Capital Finance Alliance, which is made up of the Global Canopy Programme (GCP) and the United Nations Environment Programme Finance Initiative, teamed up with Deutsche Gesellschaft für Internationale Zusammenarbeit (GIZ) GmbH Emerging Markets Dialogue on Finance (EMDF) and several leading financial institutions to launch a project to pilot scenario modeling.

Funded by the German Federal Ministry for Economic Cooperation and Development (BMZ), RMS was appointed to develop a first-of-its-kind drought model. The aim is to help financial institutions and wider economies become more resilient to extreme droughts, as Yannick Motz, head of the emerging markets dialogue on finance, GIZ, explains.

“GIZ has been working with financial institutions and regulators from G20 economies to integrate environmental indicators into lending and investment decisions, product development and risk management. Particularly in the past few years, we have experienced a growing awareness in the financial sector for climate-related risks.” 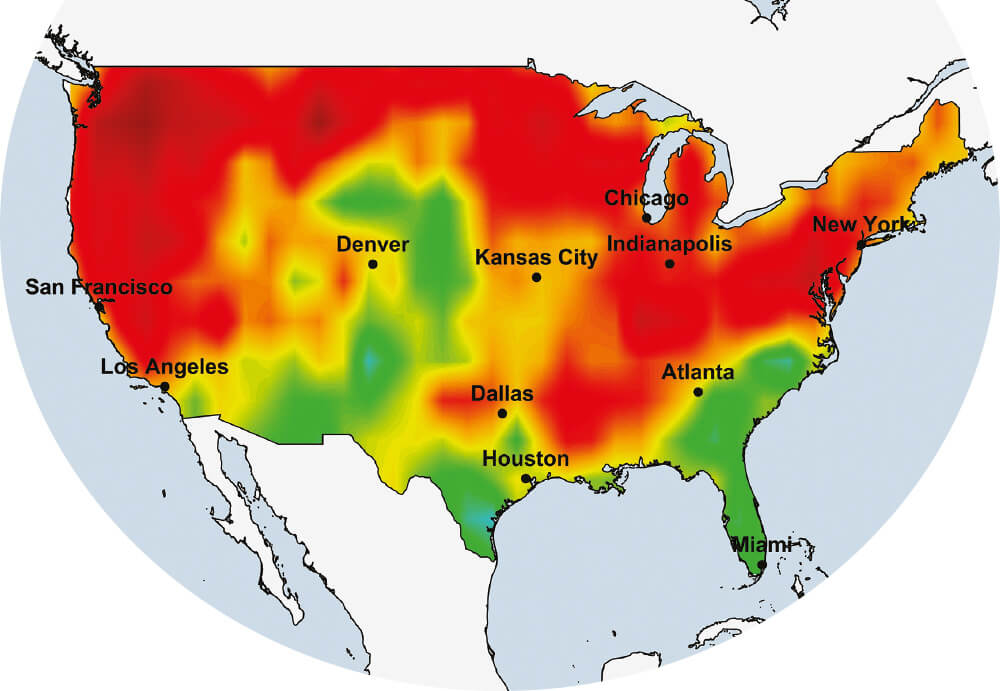 “The lack of practicable methodologies and tools that adequately quantify, price and assess such risks, however, still impedes financial institutions in fully addressing and integrating them into their decision-making processes,” he continues. “Striving to contribute to filling this gap, GIZ and NCFA initiated this pilot project with the objective to develop an open-source tool that allows banks to assess the potential impact of drought events on the performance of their corporate loan portfolio.”

It is a groundbreaking project between key stakeholders across public and private sectors, according to RMS managing director Daniel Stander. “There are certain things in this world that you can only get done at a Davos level. You need to bring ministerial-level government officials and members of commerce together. It’s only that kind of combination that is going to address the world’s biggest issues. At RMS, experience has taught us that models don’t just solve problems. With the right level of support, they can make markets and change behaviors as well. This initiative is a good example of that.”

RMS adapted well-established frameworks from the insurance sector to build – in a consortium complemented by the Universities of Cambridge and Oxford – a tool for banks to stress test the impact of drought. The model was built in close collaboration with several financial institutions, including the Industrial and Commercial Bank of China (ICBC), Caixa Econômica Federal, Itaú and Santander in Brazil, Banorte, Banamex and Trust Funds for Rural Development (FIRA) in Mexico, UBS in Switzerland and Citigroup in the US.

“Some of the largest losses we saw in some of our scenarios were not necessarily as a result of an industry sector not having access to water, but because other industry sectors didn’t have access to water, so demand dropped significantly and those companies were therefore not able to sell their wares. This was particularly true for petrochemical businesses that are heavily reliant on the health of the broader economy,” explains Moss. “So, this model is a broad framework that incorporates domestic interconnectivity and trade, as well as global macroeconomic effects.”

There is significant scope to apply this approach to modeling other major threats and potential sources of global economic shock, including natural, manmade and emerging perils. “The know-how we’ve applied on this project can be used to evaluate the potential impacts of other stresses,” explains Peiris. “Drought is just one environmental risk facing the financial services industry. This approach can be replicated to measure the potential impact of other systemic risks on macro and micro economic scales.”