With pressure from multiple directions for a change in the approach to climate risk, how the insurance industry responds is under scrutiny

Severe threats to the climate account for all of the top long-term risks in this year’s World Economic Forum (WEF) “Global Risks Report.” For the first time in the survey’s 10-year outlook, the top five global risks in terms of likelihood are all environmental.

From an industry perspective, each one of these risks has potentially significant consequences for insurance and reinsurance companies: 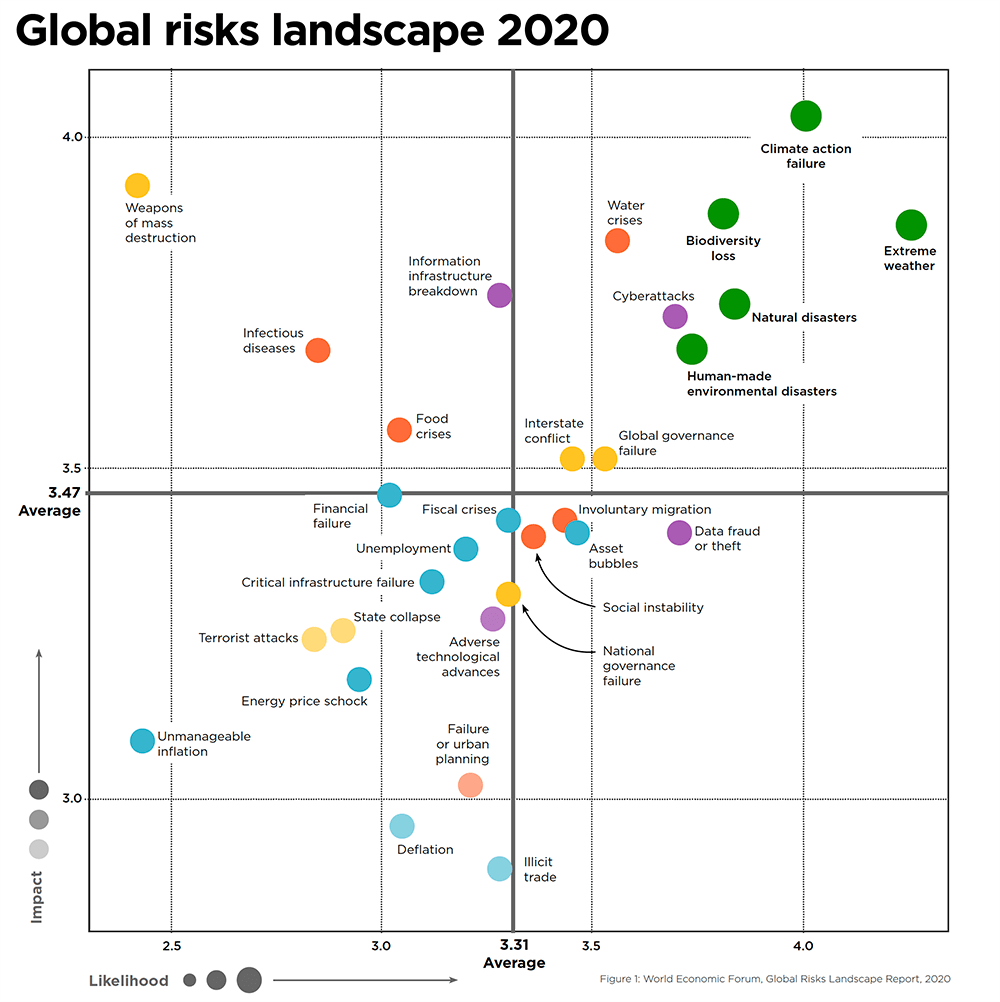 “There is mounting pressure on companies from investors, regulators, customers and employees to demonstrate their resilience to rising climate volatility,” says John Drzik, chairman of Marsh and McLennan Insights. “Scientific advances mean that climate risks can now be modeled with greater accuracy and incorporated into risk management and business plans. High-profile events, like recent wildfires in Australia and California, are adding pressure on companies to take action on climate risk.”

There is mounting pressure on companies from investors, regulators, customers and employees to demonstrate their resilience to rising climate volatility”

In December 2019, the Bank of England introduced new measures for insurers, expecting them to assess, manage and report on the financial risks of climate change as part of the bank’s 2021 Biennial Exploratory Scenario (BES) exercise. The BES builds on the Prudential Regulatory Authority’s Insurance Stress Test 2019, which asked insurers to stress test their assets and liabilities based on a series of future climate scenarios. The Network for the Greening of the Financial System shows how regulators in other countries are moving in a similar direction.

“The BES is a pioneering exercise, which builds on the considerable progress in addressing climate-related risks that has already been made by firms, central banks and regulators,” said outgoing Bank of England governor Mark Carney. “Climate change will affect the value of virtually every financial asset; the BES will help ensure the core of our financial system is resilient to those changes.”

The insurance industry’s approach to climate change is evolving. Industry-backed groups such as ClimateWise have been set up to respond to the challenges posed by climate change while also influencing policymakers. “Given the continual growth in exposure to natural catastrophes, insurance can no longer simply rely on a strategy of assessing and re-pricing risk,” says Maurice Tulloch, former chair of ClimateWise and CEO of international insurance at Aviva. “Doing so threatens a rise of uninsurable markets.”

The Cost of Extreme Events

In the past, property catastrophe (re)insurers were able to recalibrate their perception of natural catastrophe risk on an annual basis, as policies came up for renewal, believing that changes to hazard frequency and/or severity would occur incrementally over time. However, it has become apparent that some natural hazards have a much greater climate footprint than had been previously imagined.

Attribution studies are helping insurers and other stakeholders to measure the financial impact of climate change on a specific event. “You have had events in the last few years that have a climate change signature to them,” says Robert Muir-Wood, chief research officer of science and technology at RMS. “That could include wildfire in California or extraordinary amounts of rainfall during Hurricane Harvey over Houston, or the intensity of hurricanes in the Caribbean, such as Irma, Maria and Dorian.

“These events appear to be more intense and severe than those that have occurred in the past,” he continues. “Attribution studies are corroborating the fact that these natural disasters really do have a climate change signature. It was a bit experimental to start with, but now it’s just become a regular part of the picture, that after every event a designated attribution study program will be undertaken … often by more than one climate lab.

“In the past it was a rather futile argument whether or not an event had a greater impact because of climate change, because you couldn’t really prove the point,” he adds. “Now it’s possible to say not only if an event has a climate change influence, but by how much. The issue isn’t whether something was or was not climate change, it’s that climate change has affected the probability of an event like that by this amount. That is the nature of the conversation now, which is an intelligent way of thinking about it.”

Record catastrophe losses in 2017 and 2018 — with combined claims costing insurers US$230 billion, according to Swiss Re sigma — have had a significant impact on the competitive and financial position of many property catastrophe (re)insurers. The loss tally from 2019 was less severe, with global insurance losses below the 10-year average at US$56 billion, but Typhoons Faxai and Hagibis caused significant damage to Japan when they occurred just weeks apart in September and October.

“It can be argued that the insurance industry is the only sector that is going to be able to absorb the losses from climate change,” adds Muir-Wood. “Companies already feel they are picking up losses in this area and it’s a bit uncharted — you can’t just use the average of history. It doesn’t really work anymore. So, we need to provide the models that give our clients the comfort of knowing how to handle and price climate change risks in anticipation.”

The Cost of Short-Termism

While climate change is clearly on the agenda of the boards of international insurance and reinsurance firms, its emphasis differs from company to company, according to the Geneva Association. In a report, the industry think tank found that insurers are hindered from scaling up their contribution to climate adaptation and mitigation by barriers that are imposed at a public policy and regulatory level.

The need to take a long-term view on climate change is at odds with the pressures that insurance companies are under as public and regulated entities. Shareholder expectations and the political demands to keep insurance rates affordable are in conflict with the need to charge a risk-adjusted price or reduce exposures in regions that are highly catastrophe exposed.

Examples of this need to protect property owners from full risk pricing became an election issue in the Florida market when state-owned carrier Florida Citizens supported customers with effectively subsidized premiums. The disproportionate emphasis on using the historical record as a means of modeling the probability of future losses is a further challenge for the private market operating in the state.

“In the past when insurers were confronted with climate change, they were comfortable with the sense that they could always put up the price or avoid writing the business if the risk got too high,” says Muir-Wood. “But I don’t think that’s a credible position anymore. We see situations, such as in California, where insurers are told they should already have priced in climate change risk and they need to use the average of the last 30 years, and that’s obviously a challenge for the solvency of insurers.

Regulators want to be up to speed on this. If levels of risk are increasing, they need to make sure that (re)insurance companies can remain solvent. That they have enough capital to take on those risks.

“The Florida Insurance Commissioner’s function is more weighted to look after the interests of consumers around insurance prices, and they maintain a very strong line that risk models should be calibrated against the long-term historical averages,” he continues. “And they’ve said that both in Florida for hurricane and in California for wildfire. And in a time of change and a time of increased risk, that position is clearly not in the interest of insurers, and they need to be thinking carefully about that.

“Regulators want to be up to speed on this,” he adds. “If levels of risk are increasing, they need to make sure that (re)insurance companies can remain solvent. That they have enough capital to take on those risks. And supervisors will expect the companies they regulate to turn up with extremely good arguments and a demonstration of the data behind their position as to how they are pricing their risk and managing their portfolios.”

The Reputational Cost of Inaction

Despite the persistence of near-term pressures, a lack of action and a long-term view on climate change is no longer a viable option for the industry. In part, this is due to a mounting reputational cost. European and Australian (re)insurers have, for instance, been more proactive in divesting from fossil fuels than their American and Asian counterparts. This is expected to change as negative attention mounts in both mainstream and social media.

The industry’s retreat from coal is gathering pace as public pressure on the fossil fuel industry and its supporters grows.

The number of insurers withdrawing cover for coal more than doubled in 2019, with coal exit policies announced by 17 (re)insurance companies. “The role of insurers is to manage society’s risks — it is their duty and in their own interest to help avoid climate breakdown,” says Peter Bosshard, coordinator of the Unfriend Coal campaign. “The industry’s retreat from coal is gathering pace as public pressure on the fossil fuel industry and its supporters grows.”

The influence of climate change activists such as Greta Thunberg, the actions of NGO pressure groups like Unfriend Coal and growing climate change disclosure requirements are building a critical momentum and scrutiny into the action (or lack thereof) taken by insurance senior management.

“If you are in the driver’s seat of an insurance company and you know your customers’ attitudes are shifting quite fast, then you need to avoid looking as though you are behind the curve,” says Muir-Wood. “Quite clearly there is a reputational side to this. Attitudes are changing, and as an industry we should anticipate that all sorts of things that are tolerated today will become unacceptable in the future.”