If you live in the western United States, the 2020 wildfire season has probably felt even more intense than the previous record-breaking seasons of 2017 or 2018. The sheer scale of the events this year has broken new records. The August Complex Fire in Northern California, triggered by an unprecedented outburst of dry lightning in mid-August, became the first “gigafire” (over a million acres burned) in the modern history of the state, according to CAL FIRE. The containment of this fire went on into October.

Three significant wildfire seasons in the last four years has created an insurance crisis across several states. Homeowners are facing non-renewals and steep increases in insurance premium rates due to costly wildfires in 2017, 2018, and now in 2020. For California, the FAIR (Fair Access to Insurance Requirements) plan – typically used as a last resort – saw a 36 percent increase in policies statewide in 2019 and a 559 percent increase in top-risk counties.

State insurance departments and other state policymakers are being pressured to act. Measures being considered include pushing incentives for mitigation and establishing standards for wildfire-hardened homes.

We know mitigation works. Even with the recent mega complex fires, 30 to 60 percent of the structures within the fire footprints survived the fire. This is a testament to the two decades of building research from organizations such as the Insurance Institute for Building and Home Safety (IBHS) and community mitigation programs such as National Fire Protection Association’s (NFPA) Firewise USA Program. Incorporating their knowledge on a range of aspects – such as roof system coverings, roof vents, suppression, vegetation management, accessibility conditions and much more – has provided a blueprint on how to reduce the impact of wildfires.

However, whether these risk reduction actions are economically worth the effort and cost is relatively unknown, or which features are the most important from the perspective of a relative investment return. Providing the cost-benefit analysis for mitigation can demonstrate to insurance companies the need to adopt risk reduction strategies instead of withdrawal strategies.

RMS® has co-authored a new white paper – Application of Wildfire Mitigation to Insured Property Exposure – together with the Center for Insurance Policy Research (CIPR), the IBHS, and the NFPA. Our shared goal was to study the economic benefits of wildfire resilience strategies.

How can you determine the difference that mitigation measures will have on exposure? Historical wildfire claims data is just not sufficient to establish the benefits of risk reduction; a probabilistic assessment of wildfire risk, examining key location and community-level attributes is required to determine potential insured property losses.

Catastrophe models can do this – calculating risk by looking at a range of factors such as topography, distance to vegetation, slope, and other location-specific information on the structure and surroundings. Structure-specific and community-level mitigation can also be reflected in loss estimates. This study incorporates learnings from building science research and a catastrophe model framework to proactively inform decision-making around wildfire risk reduction for residential homeowners in wildfire zones.

The paper shows there are opportunities to significantly reduce this risk with both structural mitigation and vegetation management. Structural modifications can reduce wildfire risk up to 40 percent. Structural and vegetation modifications combined can reduce wildfire risk up to 75 percent when simply moving from a neutral property setting to a well-built wildfire-resistant structure. Moreover, we determine that the losses avoided can be even more significant (e.g., five times greater) when compared to a highly flammable structure.

The white paper demonstrates from a cost-benefit perspective that for a number of the modeled locations the relative risk reduction, if enabled within insurance products based on wildfire risk-based pricing, would provide economically effective incentives at promoting mitigation with payback periods from 10 to 25 years. It concludes that the identification of locations where viable economic incentives prove effective is complex. Insurance companies will need to invest in location-specific data and new pricing approaches that leverage probabilistic methodologies and incorporate risk-reduction strategies.

Together with our partners, we hope that this study provides a first foundational effort to help illustrate what could be possible with mitigation. Further research is necessary to detail specifically where and how economically effective wildfire mitigation could be applied in the context of insured property exposures.

Both the industry and regulators are rapidly focusing on mitigation as a potential route forward to ease insurability issues. There is a definite and growing need for this type of analysis to help guide the implementation of wildfire risk reduction actions and inform the policy discussion for how to make this happen in an economically efficient manner. 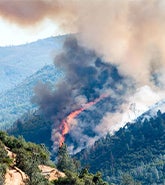