In March 2018, RMS hosted the U.S. Geological Survey (USGS) workshop at our Newark headquarters in California to discuss the interim updates planned for the 2018 USGS National Seismic Hazard Map Project (NSHMP). Details can be found in my previous blog: Are You Ready for an Interim USGS NSHM Update?

The USGS informed the public and technical community about this interim update ahead of their regular six-year cycle of updates anticipated after 2020. The main purpose was to incorporate new ground motion modeling advances for Central and Eastern U.S. from Project 17, which has significant value for the national building code (details can be found here).

Towards the end of 2018, the USGS published the draft document and national hazard maps to receive scientific peer review and public feedback from the user community (Petersen et al. 2018). Since then, the USGS has been very busy incorporating the updates and finalizing the models. In December 2019, they published the official 2018 USGS NSHMP document in the Earthquake Spectra journal.

Summary of the 2018 USGS Update

Before I get into details, let me briefly inform you about the scope of the 2018 USGS updates. It included incorporating:

Seismic hazard changes caused by the updated earthquake catalog are quite minimal because they mostly reflect the incremental update to the rate of earthquakes. Also, there is no deviation from the hazard view in California, as the UCERF3 source models for the state remains unchanged. Moreover, there are new guidelines for USGS to incorporate site amplification models within and outside the sedimentary basins into national seismic hazard calculations for the first time.

Even though the USGS study on this topic is still evolving due to its complexity, RMS has already considered many of these modeling aspects into the current RMS® United States Earthquake Model as part of the version 17.0 North America Earthquake Models. Accordingly, RMS plans to review the impact due to the first and main item of the updates in the list on the U.S. Earthquake Model seismic risk losses.

An Overview of the New Ground Motion Model

There are two sets of GMMs that the USGS incorporated in the updates. During the USGS review process, the public and technical community have provided the USGS with strong support for incorporating the NGA-East GMMs first published in 2015 – the initial Pacific Earthquake Engineering Research Center (PEER) report can be found here.

For those who are not familiar with NGA-East study, the objective was to develop a new ground motion characterization (GMC) model for the Central and Eastern North America (CENA). The GMC consisted of a set of new GMMs for median horizontal ground motions, a set of standard deviation models, and their associated weights in logic trees for use in probabilistic seismic hazard analyses. This was an important advancement by NGA-East developers to fill in the gap for the CENA region where there is a scarcity of strong ground motion observations and thus, the need for robust validation methods.

Consequently, the new model, in addition to providing a better estimate of the ground motions, captures a broader epistemic uncertainty, more physics-based variability and correlation within the models. Two years later, NGA-East group published the updated, second set of GMMs for the use by USGS intended for 2018 USGS updates (McNamara et al. 2018).

One key update in the NSHMP is that the USGS has adopted a new approach in assigning weights to the ground motion models to improve the seismic hazard assessments. The USGS implemented the weights provided by the NGA-East modeling teams based on Sammon’s mapping concept (Goulet et al. 2017, with addendum in 2018) in addition to the weights based on 2014 USGS NSHMP methodology. Accordingly, USGS has assigned 33 percent weight to the existing approach and 67 percent weight to the new approach proposed by NGA-East developers. Overall, the new 2018 USGS NSHMP GMMs represent a significant advancement in the forecasting of ground shaking in the Central and Eastern U.S. based on new strong motion data and simulations.

So, how does this affect RMS model consumers? In my previous blog, I mentioned that the preliminary USGS updates will be reviewed by RMS in detail and a plan for the potential loss change impact on the RMS United States Earthquake Model as part of version 17.0 North America Earthquake Models will be communicated with our clients.

Currently, RMS is in the process of reviewing the 2018 USGS updates mainly due to NGA-East GMMs, examining the changes in seismic hazard and evaluating the impact on the losses based on the U.S. Earthquake Model. RMS is also planning to conduct an impact study due to the new NGA-East GMM sets as compared to the 2014 USGS NSHMP GMPEs on the U.S. Earthquake Model losses concentrated in Central and Eastern U.S. This will help RMS model consumers understand the impact of 2018 USGS NSHMP updates on portfolio level insurance risks. Finally, RMS will communicate the outcome of this study in the upcoming months to help our clients fine-tune their business decisions in a timely manner. More to follow later, so stay in touch! 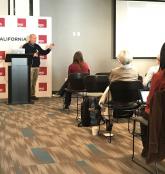 Are You Ready for an Interim USGS NSHM Update?

Among her many accomplishments, Emel completed over five RMS projects so far, has published ten peer-reviewed journal papers between 2013-2020, some of which were ranked among the most cited publications. Worldwide, her published models have been used as reference models by the scientists, academics and practicing engineers including USGS, Global Earthquake Model (GEM), and Geoscience Australia. She is most well known for her NGA-West 2 models.

Emel continues to consult and play an active role in national and international engineering and seismic hazard projects. Emel holds a Ph.D. and a master's degree in Civil Engineering (Geotechnical) from the University of California, Los Angeles.