The first time I noticed the coincidence I assumed there had been a mistake. The most-costly flooding in modern Italian history inundated the city of Florence on November 4, 1966. The Arno river burst its banks and flooded the low-lying heart of the city, with six meters (19.6 feet) of water in some riverine streets. A hundred people died and three to four million priceless medieval books and manuscripts along with precious artworks stored in basements, were damaged and destroyed. It was the worst flood in the city for at least 400 years. 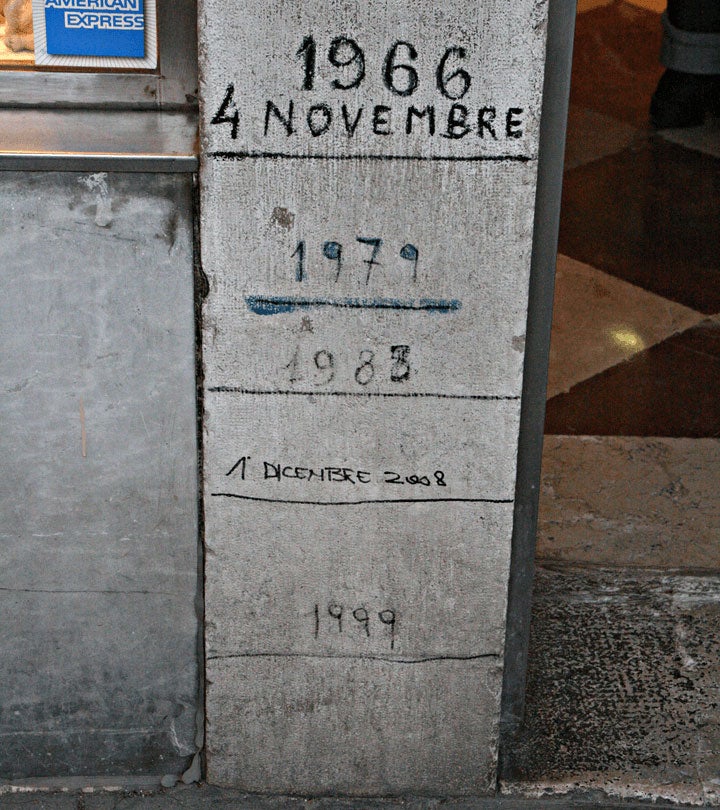 But then the highest measured storm surge flood “acqua alta” in Venice, reached 1.94 meters above the sea level datum, on the same day in November 1966: November 4.

Two quite distinct phenomena – one related to persistent rainfall, the other to sustained winds and low pressure, drowning the two most famous city states of Renaissance Italy, 260 kilometers (160 miles) apart, on the same day. It seemed as unlikely as a M8 San Francisco earthquake arriving on the same day as a Cat 5 Miami hurricane. In principle at least, how many insurers would consider their Venetian commercial coastal flood portfolio and their Florentine commercial river flood portfolio and assume they could both suffer their maximum loss on the same day?

The physical reason for the Venice-Florence correlation has, once again been highlighted 53 years later in November 2019. On November 12, 2019, the water level in Venice peaked at 1.87 meters, the second highest on record, only seven centimeters lower than the level reached in 1966. Around 80 percent of Venice was underwater. Five days later another high tide in Venice reached 1.5 meters and again flooded much of the city. On the same day (November 17) the Arno river running through Florence, was at 4.8 meters with flood warnings issued in both Florence and downstream in Pisa 70 kilometers away, in anticipation the level could reach the critical height of 5.5 meters. 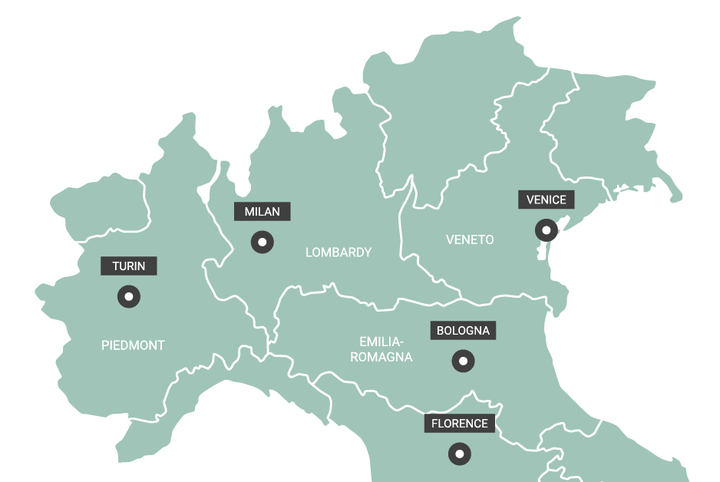 The highest rainfall totals in the Arno catchment come from stalled autumnal depressions, which can also bring persistent southeasterly winds driving a surge up the Adriatic. Big floods have occurred in Florence about once per century. With the seas still warm, the beginning of November brings the highest rainfall. In the fourteenth century, peak flow on the Arno was on November 4, 1333. In the nineteenth century, the peak was on November 4, 1844. Perhaps the highest of all known acqua altas at Venice occurred on November 5, 1686.

Water levels are rising in Venice from a combination of eustatic sea levels and land subsidence. Canaletto’s paintings of canalside buildings reveal how the green sea level algal ring has moved over the centuries – rising an average 2.3 millimeters per year since the mid-eighteenth century but at slower rates in the seventeenth century. Venice sank 25 centimeters through the twentieth century, 60 percent on which is blamed on subsidence accompanying deep water extraction from industries situated around the lagoon. The city continues to sink at 0.6-1.6 millimeters per year, onto which you can add the eustatic sea level rise of around three millimeters per year. 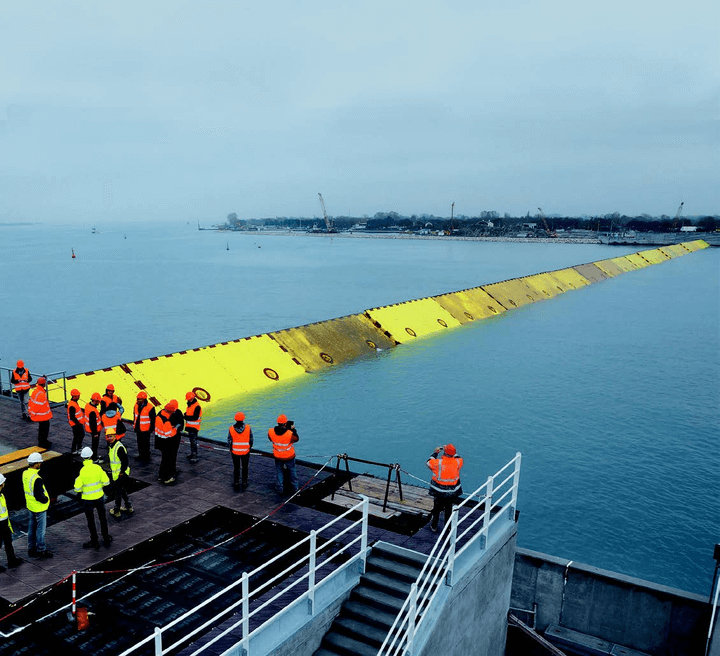 In May 2003, Silvio Berlusconi launched the “Modulo Sperimentale Elettromeccanico” (or MOSE) project, comprising 78 air-filled pontoons intended to block a significant storm surge from entering the Venetian Lagoon. Scheduled to be completed by 2018, cost overruns and corruption have pushed the date to 2021-2022. As sea level rises the gates will need to be closed for longer and longer periods, while the cruise liners, already bringing many of the crushing 36 million tourists each year, will demand the gates are kept open.

An acqua alta event is defined as a sea level above 110 centimeters and currently leads to flooding in the city on average five to ten times a year; a rate that, without intervention, will increase significantly through the twenty-first century. The shopkeepers of Venice are used to ordinary acqua alta events, placing flood guards in their doorways, and continuing to trade through the open door. During a moderate flood, people walk through the city on benches. Venice is a manifestation of what lies ahead for many coastal cities through the twenty-first century, living with sea level rise, and accommodating increasingly frequent “sunny-day” or nuisance flooding. The city, with its 50,000 inhabitants no longer living on the ground floor, could offer courses on coping strategies.

Yet is flooding the only threat to the city? 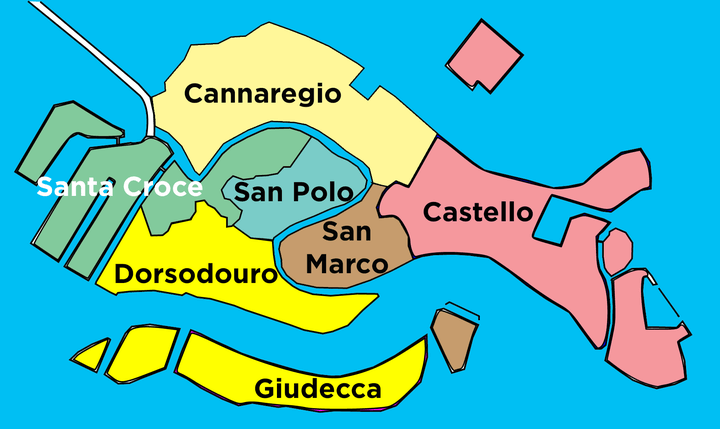 The geomorphology of the principal Venetian islands is intriguing. The land occupies a rounded triangle with a west-east base, about four kilometers long and three kilometers north-south. On the southern side it includes a wide meandering and deep former river channel oriented almost east-west (the Canale della Giudecca) which separates the island of Giudecca from the rest of Venice. Into this wide channel, from the northeast, runs a narrower meandering channel known as the Grand Canal.

This configuration of meandering channels is characteristic of a salt marsh. The intriguing feature is why any land adjacent to these channels rises above high tide. The ground elevation in the center of the city is 90 centimeters. My hunch is a blind thrust fault underlies the city, which raised the land a meter or two, in some prehistoric earthquake. That would explain why the shape of the islands is unrelated to the pattern of channels.

Earthquakes have occurred in the vicinity of Venice through history. In 2012 two earthquakes at Magnitude 6.1 and 5.8 hit Emilia Romagna in the Po Valley 120 kilometers southwest of Venice, causing 27 fatalities and several billions of euros damage. The earthquakes were situated on blind thrust faults, oriented east-west, as might be hypothesized under Venice. Post-seismic recovery could then be part of the explanation for the city’s subsidence.

We started this story with a search for unexpected correlation. It would be ironic if an earthquake was triggered in the Venetian lagoon by an “acqua alta”.