Despite the paucity of large-scale terrorism attacks in North America, the multifaceted terrorism threat in the U.S. continues to be a significant one that must be managed by the (re)insurance risk management industry,according to experts at this year’s RMS Terrorism Risk Summit.

The theme for this year’s summit, held in New York on September 25, focused on the multifaceted terrorism threat landscape in the U.S. and how the peril can be managed by the insurance industry. While terrorism insurance take-up rates remain healthy, and the U.S. Government Terrorism Risk Insurance Program (TRIP) backstop offers reassurance in the event of a large-scale attack, the uncertainty around TRIP’s pending renewal at the end of 2020 and the fluid threat environment have given (re)insurers some pause for thought. 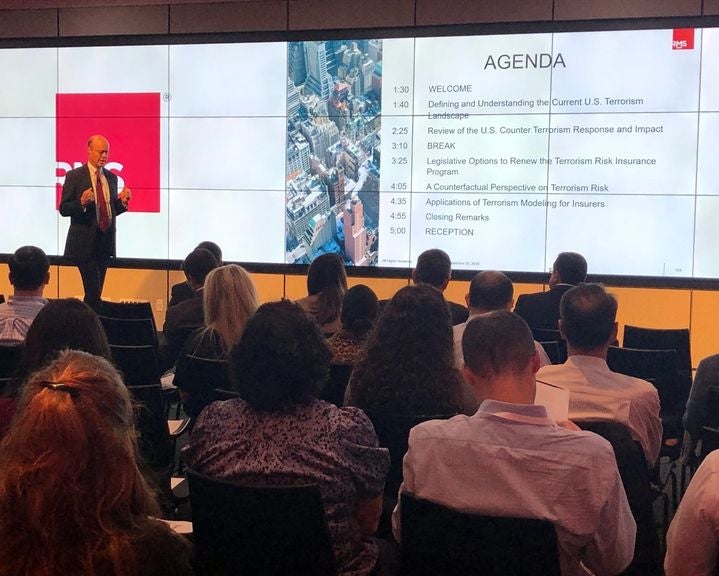 Both Ambassador Benjamin and Steven Simon kicked off our summit by assessing the threat environment and counterterrorism responses in the United States. Steven Simon cogently argued that the terrorism threat landscape in the country has become multifaceted with more distinct terrorism groups from both international and domestic sources intending to attack U.S. targets.

While Salafi-jihadi terrorist groups’ intention to attack the U.S. remain unabated, he is concerned with the burgeoning threat of far-right terrorism in the country. Simon conceded during his presentation that although far-right terror groups in the U.S. have not indicated plans to carry out major mass casualty attacks, the risk of a larger scale attack cannot be discounted.

In light of the attacks on a Saudi Arabian oil processor in Abqaiq in September 2019, Simon also highlighted the threat of Iranian-supported militant groups. Tehran has worked assiduously to grow a network of proxy forces. Simon acknowledges that increased pressure by the United States on Iranian interests might push them to resort to asymmetric military means to counter United States’ perceived aggression.

Ambassador Benjamin rounded up the presentation on the U.S. threat landscape by leveraging his twenty years in counterterrorism to offer an overview of the current U.S. counter terrorism strategy. He applauds the work done by the United States Government within the counterterrorism field. He assesses that U.S. national security remains robust. Intelligence sharing has been enhanced, resources devoted to counterterrorism have also increased, and many new procedures have been implemented to protect the country. Indeed, he strongly believes that terrorism risk in the U.S. has decreased due to a stronger counterterrorism environment.

Nevertheless, Ambassador Benjamin is not sanguine about the future. He notes that terrorist groups are highly adaptive and cannot be underestimated. The U.S. homeland will continue to remain a primary target for many distinct terrorist groups whether it is within the right-wing terrorism or Salafi-jihadist milieu. In addition, he rightly asserts that the U.S. will have to face many other threats to its security. Threats to national security will expand and diversify in the coming year and it remains to be seen whether the U.S national defenses are flexible enough to respond to these myriad threats.

An excellent review of the current TRIP structure was provided by the RAA’s Scott Williamson. His presentation delved into the various legislative options being considered as part of the upcoming renewal in 2020. It also sheds light on RAA’s policy analysis that is facilitating industry discussions. During his presentation, Williamson demonstrated a tool that RAA has developed that incorporates the RMS terrorism loss estimates.

The objective of the tool is to provide policymakers and analysts with the ability to understand and appreciate the magnitude of large-scale terrorism events. In his presentation, Williamson also commends the role played by TRIP and argues that the federal backstop provides robust support for the U.S. insurance industry, with the federal government taking an 80 percent share of losses as of 2020, thereby offering a free reinsurance layer to the insurance industry. For more details, see our blog post on this issue.

In a later session, Dr. Gordon Woo, catastrophist and lead architect of the RMS terrorism model, outlined the role of counterfactual analysis to help in quantifying terrorism risk. Dr. Woo noted that actual loss experience has always been a benchmark for actuarial risk analysis. Where losses are frequent, risk insights can be gained through rigorous statistical data research. However, for rarer risks such as a catastrophic terrorist attack, this might not be applicable and any such data used may misjudge the risk involved.

Dr. Woo argues that to overcome the dearth of data, a counterfactual analysis of such risks can help in quantifying it. To enlarge the historical event dataset of a specific type of risk, a retrospective stochastic analysis of historical events can be undertaken to explore the range of possible catastrophe losses to help understand the risk better. Indeed, Dr. Woo asserts that counterfactual analysis of historical events is an important supplementary tool for uncertainty assessment and disaster preparedness, as well as for catastrophe insurance risk management such as the estimation of Probable Maximum Loss (PML).

Derek Blum, senior director at RMS, responsible for emerging risk models, concluded the exciting half-day summit by focusing on RMS terrorism modeling solutions and summarized various uses of terrorism models and risk analytics that drive decisions within the insurance market. Blum noted in his presentation that although managing terrorism risk will remain a challenge due to the significant associated tail risk, the insurance industry is still interested in underwriting the peril and increasing their risk appetite.

More importantly, insurance and reinsurance companies still leverage RMS’ terrorism solutions to help quantify, report on, and manage the risk. Thus, as the threat becomes multifaceted and more dynamic, (re)insurers exposed to terrorism risk will benefit from a robust toolset and data to quantify the terrorism risk.

This year’s terrorism summit represents the eighteenth hosted by RMS, with the first held one year after the September 11, 2001 attacks. Each year, the summit provides an opportunity for our clients to gain a broader understanding of the evolving global terrorism landscape and its impact on the insurance industry. This half-day event brought together the world’s leading terrorism experts and over 100 RMS clients and insurance professionals to discuss how the terrorism risk landscape has changed globally and the likely impact on the insurance industry. Slides from the presentation can be found on the RMS OWL client site.