In its short life, Hurricane Michael has certainly developed quickly —  it only achieved tropical storm status just four days ago on Sunday, October 7.  And now, according to the latest bulletin from the National Hurricane Center (NHC), as at 12:00 UTC today, Michael has strengthened further, into an extremely dangerous Category 4 major hurricane, with maximum sustained wind speeds of 145 miles per hour (233 kilometers per hour).

The 09:00 UTC NHC bulletin placed Michael at about 140 miles (225 kilometers) south-southwest of Panama City, Florida, tracking north at 13 miles per hour (20 kilometers per hour). Hurricane-force winds currently extend outward up to 45 miles (75 kilometers) from the center and tropical-storm-force winds extend outward up to 185 miles (295 kilometers). According to the latest RMS HWind Forecast Storm Track Probabilities and Deterministic Scenarios chart (pictured below), Panama City has a 95 percent probability of the center of Michael passing within 50 miles. 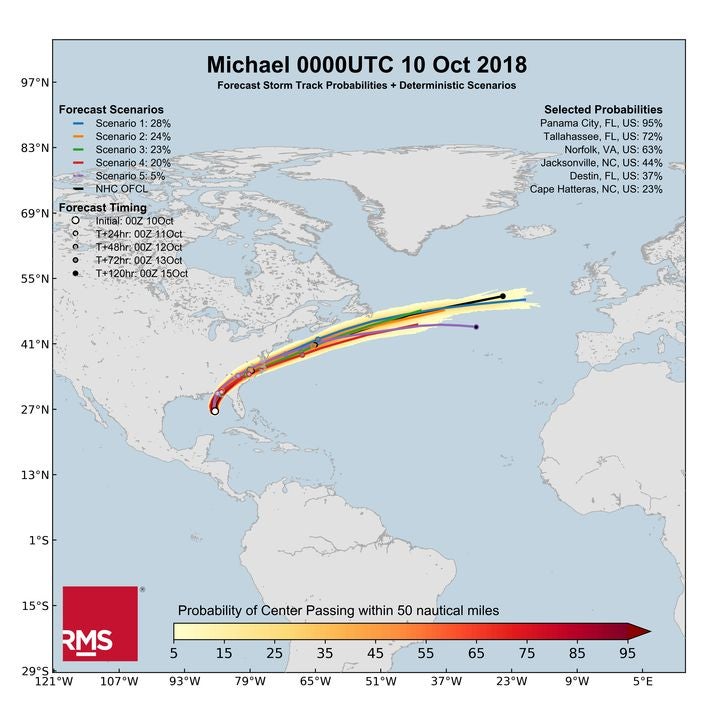 The system is forecast to make landfall over the Florida Panhandle region later today, Wednesday, October 10, and the NHC advise that some additional strengthening is possible before landfall.

At this forecasted strength, Michael is set to become the most intense hurricane and the first Category 4 system to make landfall over the Florida Panhandle in recorded history.

As we discussed in our blog yesterday, comparisons have been made for Michael with Eloise in 1975, Opal in 1995, and the last major hurricane to reach the Panhandle (Category 3 or greater) — Hurricane Dennis, some 13 years ago in 2005.

With the strengthened wind speeds of 145 miles per hour or greater, Michael is expected to produce potentially catastrophic wind damage where the core of the hurricane moves onshore in the Florida Panhandle. After landfall, dangerous hurricane-force winds are also forecast to extend well inland across portions of northern Florida, southern Georgia, and southeast Alabama. Michael is forecast to maintain tropical storm strength even after it re-enters the Atlantic near Norfolk, Virginia early Friday morning. Heavy rainfall from Michael could also lead to localized flash flooding across the southeastern United States.

The threat of storm surge has also increased, with life-threatening storm surge likely across parts of the Florida Panhandle region, particularly between Tyndall Air Force Base and Keaton Beach, a distance around 160 miles (257 kilometers) where up to 13 feet (4 meters) of inundation is forecast.

Preparations have been swift and media reports state that about 28 million people are under some form of watch or warning, either for hurricane, tropical storm, or storm surge, and these span across six states from Florida, Alabama, Mississippi, Georgia, and the Carolinas. Andrew Gillum, the mayor of Tallahassee, was quoted in the media stating, “This will be the strongest storm we’ve seen in our area in over a century.” Rick Scott, Florida Governor advised that it was too late for residents to evacuate from the Florida coast, saying that those residents who stayed at home should start seeking refuge immediately.

For our latest information on Hurricane Michael, follow RMS on Twitter, LinkedIn, read the RMS blog — and RMS clients can get a wide range of resources from RMS OWL.