As we are approach the more active part of hurricane season in late August, most of the action so far has been taking place in the Central Pacific with Hurricane Hector passing to the south of the Hawaiian Island chain a couple weeks ago. Now, Hurricane Lane is projected to pass much closer to Hawaii and this time the U.S. National Oceanic and Atmospheric Administration (NOAA) has sent in the “big guns”. In addition to “Gonzo” — NOAA’s Gulfstream jet (NOAA has an agreement that allows them to name their aircraft after Sesame Street characters), the Lockheed Orion P3 “Kermit” is also on duty in Hawaii to fly research missions into Hurricane Lane. Kermit brings an arsenal of scientific sensors including the airborne Doppler radar and the Stepped-Frequency Microwave radiometer (called the “Smurf”) and a supply of GPS dropsondes to launch into the storm.

Data feeds from all three of these instrument systems will be reporting into the RMS HWind analysis system in real-time and our team of analysts will be producing “snapshots” of Lane’s surface wind field. The snapshots help depict the size and intensity of the wind field and also provide the Integrated Kinetic Energy (IKE) metric that conveys the destructive potential of the storm. Since the IKE metric scales with the stress exerted by the wind on the ocean surface, it more accurately depicts the forcing of the wind field that leads to waves and storm surge. 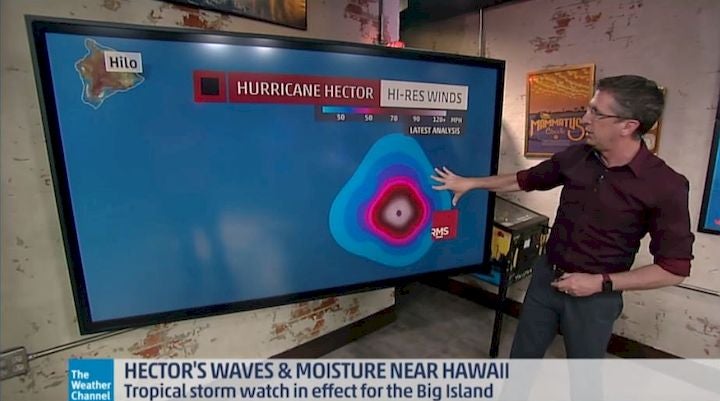 IKE recently made its television debut on The Weather Channel last week, as RMS supplied a snapshot of Hurricane Hector’s surface wind field as it made it way south of Hawaii, which clearly illustrated wind field intensity, shown in bands to define its destructive potential. RMS will share more of these snapshots to media outlets to help the public get more of an insight into the intensity of these events.

And because IKE conveys both the intensity and the size of the storm into one number, it has become a useful metric for comparing the destructiveness of storms. For instance, Harvey last year at 30 Terajoules (TJ) at landfall in Texas, was dwarfed by Irma (125 TJ before landfall in Florida) and Maria (75 TJ over Puerto Rico).

IKE is especially important for storms that might be considered “weak”, e.g. a Cat 1 or 2 on the Saffir-Simpson scale. The Saffir-Simpson (SS) scale is based completely on the maximum wind speed, which usually only covers a very tiny part of the storm. A large hurricane such as Sandy in 2012 (SS1) or Ike in 2008 (SS2) might not warrant a high SS category, but these low-intensity/high-impact storms were very large, which allowed forcing of massive waves and storm surge, leading to larger losses than their SS category might suggest.

As I update this blog (Tuesday, August 20, 4pm EDT) NOAA has twice sent Kermit’s flying laboratory into Hurricane Lane and the U.S. Air Force 53rd Reconnaissance Squadron are also flying into Lane at a slightly higher altitude. It is amazing that these aircraft can be refueled and sent back out to the storm with a new crew very rapidly. Last night Kermit completed its mission at about 2300 UTC and was back out there en-route to the storm by 0200 UTC!

The bottom-line is that there is a wealth of data being sent off the aircraft to help us document Lane’s wind field. Lane intensified to 160 miles per hour (257 kilometers per hour) last night in response to weaker shear and is expected to slowly weaken as it approaches (for now at least) close to the south of the island chain.  Lane‘s IKE is relatively low, running 20-26 TJ for over a day now. In summary, Lane is a compact but intense tropical cyclone and its path is currently projected to pass close enough to either make landfall or pass close enough to cause potential for destructive winds near the end of the week. 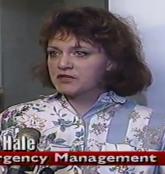 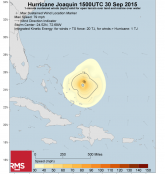