Central Europe is still recovering from the massive flooding that followed one of the wettest months of May in recorded history for this region. In late May and early June, a period of intense rainfall caused major river systems, including the Danube and Elbe, which were already flowing above normal levels, to swell rapidly and burst their banks. Further showers and thunderstorms raised river levels higher, bringing localized flash floods.

Flooding near the source of precipitation occurred rapidly but destruction spread as the flood wave propagated downstream over the following week, impacting numerous cities over a vast area. Dike overtopping and breaching was common during this event, with significant on-floodplain flooding. Large areas of Germany, Austria, and the Czech Republic were seriously affected, while Switzerland, Poland, Slovakia, Hungary, Croatia, and Serbia were also impacted to lesser extents. 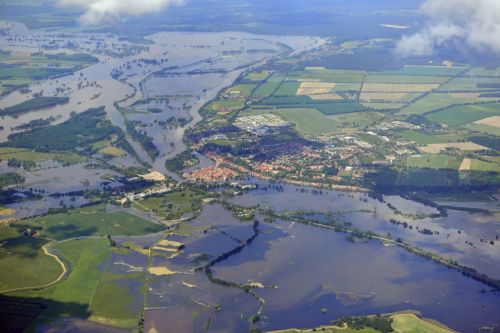 June 10, 2013 flooding and overflow of the banks of the Elbe along the lower course at Havelberg in Saxony-Anhalt. (Source: Euroluftbild.de/Grahn CC-BY-SA-3.0 http://creativecommons.org/licenses/by-sa/3.0)

According to Aon Benfield, the Central Europe floods were the costliest economic disaster during the first half of 2013—and the costliest to insurers, with expected payouts of US$5.3 billion (£3.5 billion) or more, with Germany experiencing the greatest loss.

This was a very different type of event to last year’s 2012 U.K. floods, where the sheer persistence of rainfall throughout the year saturated the soil and raised groundwater levels. Consequently, numerous small-scale, off-floodplain floods were observed, with surface water or pluvial flooding composing a significant component of the total insured loss.

Although most individual event losses were not notable, 2012’s estimated accumulated loss reached US$1.8 billion (£1.2 billion) (the second largest U.K. flood-related insured loss after the 2007 floods.

The contrasting nature of the past two years of attritional and catastrophic European floods raises the question: How can the insurance industry effectively manage flood risk in the face of such a widespread and variable peril? And, what role should the government play in mitigating the risk?

In part, government spending on flood defenses helps to manage the hazard; as demonstrated in Prague this year, where new defenses successfully protected vulnerable locations. However, budgets for such schemes are finite, meaning some regions will remain vulnerable and defense schemes are often targeted towards protecting against flooding in the floodplain or at the coast, which will not protect against the type of inland flooding observed in the U.K. in 2012.

For properties that remain in vulnerable locations, affordable insurance is their only means of protection but the frequency and severity of the hazard at such locations, makes it challenging for the insurance industry to offer affordable cover.

While there are positive initiatives on the horizon, such as the proposed Flood Re scheme in the U.K. (a government and industry backed flood pool), which is planned to replace the existing Statement of Principles (a voluntary commitment by the U.K. insurance industry). Making such schemes work requires a comprehensive evaluation of the hazard; a piecemeal approach will not suffice.

As demonstrated in the U.K. in 2012, it is necessary to consider all sources of flooding on- and off- the floodplain, including surface water flooding. The sheer scale of the 2013 Central European floods also showed that this peril can’t be viewed through the constraints of geographical boundaries; rather, large-scale catchments must be assessed.

In 2016 RMS will release a new and expanded pan-European inland flood model. The model will cover 13 at-risk countries, including those affected in 2012 and 2013, to comprehensively and consistently evaluate the risk from all sources of inland flooding, considering all underlying aspects of the hazard, at a high resolution across Europe. The scale and resolution of this model will, for the first time, enable the (re)insurance industry to assess European flood risk in a coherent manner, with the level of detail required to manage this dynamic and extreme peril.