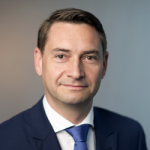 The sheer scale of the Australian bushfires is hard to comprehend, as what has already been a long bushfire season continues apace. Australia’s most-populous state, New South Wales (NSW) has been the worst-affected, with 12.1 million acres (4.9 million hectares) burnt over the current bushfire season. According to the New South Wales Rural Fire Service, damage has recently escalated with 672 homes destroyed since January 1, during a season which has seen 1,870 homes destroyed and 653 damaged.

There has also been reports of significant damage in the neighboring states, including Victoria to the south and Queensland to the north of NSW. Overall, across southeast Australia, 15.6 million acres (6.3 million hectares) have burned, and 25 people have been killed as of January 7. According to the Insurance Council of Australia (ICA), as of January 10, a total of 10,550 claims have been filed since November 8, amounting to around AU$939 million (US$645 million) in insured losses. The ICA notes that it expects more claims to be filed in the coming weeks.

Australian insurers are under the spotlight, but are holding up very well – insurer IAG has publicly stated it was “… on track to blow its perils allowance for the six months to December by AU$80 million” but had strong reinsurance in place. The article in Financial Review commented that there may be a modest effect on earnings for the industry overall, and premiums may have to rise.

There have been comparisons with the California wildfires in 2017 and 2018, and how the size of the area that has burned in bushfires is many times larger than California. The area is vast, but the areas are also much more sparsely populated, for California the fires reached more densely populated areas. Losses of US$10 billion in one California season puts these bushfire losses in context. One common area for both countries is the increasing level of construction in wildland urban interface (WUI) areas, building close to or within burnable vegetation, which puts more exposure in harm’s way and increases losses.

Early Start to the Season

Bushfires in Australia can occur all year round, though their severity varies dependent on the region – Northern Australia bushfires intensify around its dry season between April to September. For southeast Australia, the season starts in October and peaks between December and March. Bushfires in NSW and Queensland started in September – an early start, with prolonged drought conditions proving conducive. By mid-November, 2.7 million acres (1.1 million hectares) had burned in NSW and Queensland.

These severe drought conditions stretching back to 2017 has even made more dense, tropical forest prone to bushfire. Southeast Australia as an ecoregion supports a diverse mix of vegetation according to the WWF, including coastal vegetation, dense heath, temperate rainforest, riparian communities, and eucalypt woodland.

The region is lush and green – the Great Dividing Range, the fifth longest land-based mountain range in the world, extends some 2,200 miles (3,500 kilometers) from the northeastern edge of Queensland down through to Western Victoria. Forests and vegetation in and around the range extend around 100-200 miles (160-320 kilometers) wide, from inland towards the coast. It supports wildlife such as the iconic koala who feed off eucalyptus trees, and contains many national parks, such as the Blue Mountains, some 30 miles (48 kilometers) inland of Sydney (pop. ~5.2 million). Farming and tourism are important for the region, and residents in cities such as Sydney are attracted to an area nestled between the coast and the greenery of the forests and mountains.

With this prolonged bushfire activity, similar to other Australian cities, Sydney has suffered with prolonged periods of poor air quality since the end of October, and recent fires have touched the edges of its Metro area. Balmoral (pop. ~400) on the southwestern outskirts of Sydney, suffered heavy damage after fires on December 21, with the Premier of NSW stating “… there was not much left” of the town. Temperatures have also soared, regularly setting new records – Penrith, an inland suburb of western Sydney, reached 48.9 degrees Celsius (120 degrees Fahrenheit) on January 5, a record for the city. The heat has caused “fire tornadoes” and “dry lightning”, to exacerbate conditions. Further south of Sydney, the villages of Cobargo (pop. ~750) and Mogo (pop. ~300) suffered significant fire damage, and the nearby resort of Batemans Bay (pop. ~16.000) was cut-off, with some 5,000 residents and visitors evacuated to safety on New Year’s Eve.

In the state of Victoria, over 200 homes are destroyed, including 43 across the East Gippsland region (pop. ~80,000), some 70 miles (112 kilometers) east of Melbourne. Eighty homes were destroyed in the Adelaide Hills, five miles east of Adelaide (South Australia) in the Cudlee Creek fire on December 23. A third of the land on the 1,700 square mile (4,402 square kilometers) Kangaroo Island, off the Adelaide coast had been burned, respected as a pristine wilderness for many native species. Fifty-six homes were destroyed on the island, and as many as 25,000 koalas were killed, during multiple fires throughout December. Estimates for the total number of animals killed across the country range as high as one billion, with many habitats predicted to take decades to recover.

According to the NSW Rural Fire Service, as at 06:00 local time on January 11, 137 bush and grass fires are burning across the state, a number that has remained fairly static over the week, with fire danger ratings at “High”, “Very High” or “Extreme” in all of the 21 areas across NSW. Extreme fire danger warnings are also in place in areas of Western Australia. Although temperatures did ease and some rain in Victoria helped containment efforts, the heat has remained with inland areas reaching 40+ degrees Celsius, but more settled weather is set for the weekend.

The wider impacts of this extraordinary bushfire season are now being assessed. An early estimate points to an extreme scenario – Moody’s Analytics state that the economic damage from the eastern fires could easily exceed the US$4.4 billion from the “Black Saturday” bushfires in 2009, which almost completely destroyed the small town of Marysville (pop. ~400) north of Melbourne and killed 173 people. This bushfire season will need to be put into context with other historical seasons in Australia; 1974-75 saw 15 percent of the country’s land mass or 289 million acres (117 million hectares) burned. “Ash Wednesday” on February 16, 1983, killed 75 people across Victoria and South Australia.

Bushfires are a regular occurrence in Australia, but the severity of this season has brought significant international media attention in a world rapidly honing in on the climate change threat. These events are increasing evaluated through the prism of climate change and the amount of attribution ascribed. The way these fires have been presented in the Australian media has spanned from saying the extent is similar to previous seasons to social media saying that most of the country is in flames.

Australian Prime Minister, Scott Morrison, has come under the spotlight for a perceived lack of action on the bushfires, jetting back from a holiday in Hawaii on December 22 to pledge government support, but also to defend the country’s coal industry. As the world’s largest coal exporter, he defended the country’s record to tackle climate change, stating it was “meeting and beating” its targets.

But the fingerprint of climate change is on these bushfires. There is increasing confidence that climate change has affected bushfire risk. A recent report from IAG cites the rise in the McArthur Forest Fire Danger Index (FFDI), used to monitor fire weather conditions; between 1974 and 2015, it shows significant FFDI increases at 42 percent of monitored sites, especially in southeast Australia. The report also states continued increases in FFDI, a higher frequency of days with severe fire danger and reduced intervals between fire events. 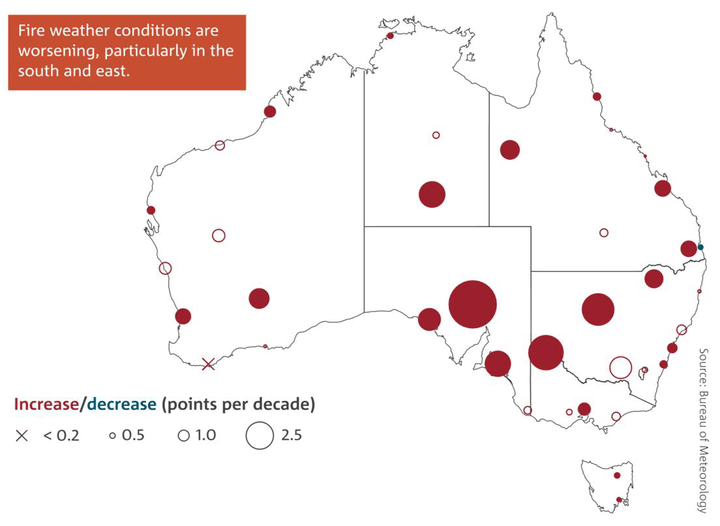 Figure 1: Trends in the annual 90th percentile of FFDI. Trend magnitudes correspond to the size of the marker with filled markers showing significant trends for the period 1974-2015 (Source Bureau of Meteorology and CSIRO 2016). Report credit: IAG “Severe Weather in a Changing Climate“

Containment is the priority as the season still has a couple of months to run, but as this season ends, similar to the California wildfires in 2017 and 2018, an assessment of whether there is a new baseline for the typical extent of a bushfire season, and how to understand this peril, will need to take place.

But the insurance industry in Australia has had climate change firmly in its sights for a while and are working hard to understand how climate change will affect the perils they manage. Peter Harmer, the head of IAG, speaks of an “… urgent need for Australia to prepare for and adapt to climate change.” As a recent article in The Economist concluded, “… with no end to the bushfires in sight, such calls are bound to grow.”

Pierre is the Managing Director responsible for the development of RMS in Australia and New Zealand, for all financial sectors private and public including the insurance, banking, investment and government sectors.

Pierre is based at the RMS Sydney office which opened in September 2017. RMS is involved in catastrophe modeling, resilience and capital risk transfer projects across the region.

Pierre has been involved with catastrophe risk transfer for the last 20 years, from modeling management to underwriting and ILS portfolio management. Pierre has global experience having worked in the U.K., Australia, Bermuda and France. Pierre graduated from the University of Cambridge (U.K.) in 2000 with a PhD in Physical Geography.