Nine Years After Darfield: When an Earthquake Drives a New Model – Part Two

The 2010 M7.1 Darfield earthquake in New Zealand started a sequence of events – the Canterbury Earthquake Sequence (CES), that propagated eastward in the Canterbury region over several years. Since the City of Christchurch is built on alluvial sediments where the water table is very shallow, several of the larger events created widespread liquefaction within the city and surrounding areas. Such ground deformations caused a significant number of buildings with shallow foundations to settle, tilt and deform.

Prior to these New Zealand earthquakes, liquefaction was observed but not on this scale in a built-up area in a developed country. As in previous well-studied liquefaction events (e.g. 1964 Niigata) this was a unique opportunity to examine liquefaction severity and building responses. Christchurch was referred to as a “liquefaction laboratory” with the multiple events causing different levels of shaking across the city. However, we had not previously seen suburbs of insured buildings damaged by liquefaction.

The New Zealand Government and the geotechnical research community spent the following years developing new models to predict the effects of liquefaction in other places around the country – and around the world. In 2012, RMS started a unique research effort to build a new regional scale loss model that could accurately estimate liquefaction-induced earthquake damage as observed during the CES.

RMS’s multi-year research study aimed to use the insurance claims data and liquefaction loss pattern as observed in Christchurch to make necessary improvements to the RMS liquefaction model. In 2013, RMS researchers were given access to the Canterbury Geotechnical Database (CGD) via active collaboration with the Canterbury Earthquake Recovery Authority (CERA). RMS began an intensive effort to also collaborate with the New Zealand engineers to assess the quality of the borehole data and post-earthquake reconnaissance data (Ancheta and van Ballegooy, 2013; Seismological Society of America 2014 Annual Meeting). This RMS and CGD collaboration continues today, with RMS helping to assess the digital data in Wellington.

The problem with the way liquefaction was modeled before the CES was that it related to bulk soil properties (liquefaction susceptibility) and ground motion intensity only. It did not directly consider ground water depth and further, it didn’t relate ground displacement to vulnerability. As a result, the old model estimated low levels of ground-related damage over large areas whereas the damage patterns seen in Christchurch had sharp spatial gradients: high damage alongside low or no damage. While simple models may produce reasonable estimates of ground-up loss in some situations, they cannot capture the gross losses above the EQC layer.

In order to overcome these issues in the previous RMS methodology, RMS has developed a new liquefaction loss model by following the approach used in rigorous site-specific analysis requiring a number of site parameters. The updated model estimates liquefaction risk by answering the following questions with new model components:

Is the anticipated earthquake loading sufficient to initiate liquefaction?

What will the effects or severity of liquefaction be in terms of vertical and horizontal ground displacement?

What will the building damage be from liquefaction effects of ground displacement?

Predictions are made with new vertical and lateral displacement equations.

Vulnerability is now based on ground displacement.

After years of focused research, evaluating different methods, and reproducing results from major studies, RMS developed a unique approach for estimating liquefaction loss calculations. The approach can formally incorporate site-specific probabilistic initiation for the first time in the loss modeling industry. Additionally, the model can differentiate initiations between vertical displacement and lateral spreading. The approach also directly utilizes borehole data and groundwater well measurements into the vertical displacement prediction and allowed for the direct inclusion of empirical based settlement calculations. 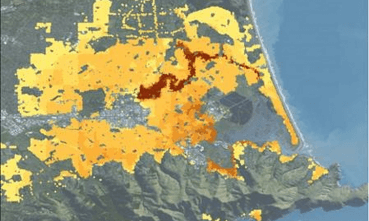 Finally, the RMS® New Zealand Earthquake High Definition (HD) Model is the first to use liquefaction vulnerability functions dependent on ground displacement and not just liquefaction susceptibility which is still prevalent in the industry. The liquefaction loss results from the new model are consistent with total loss as observed during Canterbury Earthquake Sequence. Furthermore, the losses are also concentrated around the Avon River which flows through Canterbury, primarily due to lateral ground displacement as observed. As an example, Figure 1 (above) is a prediction of the liquefaction damage pattern for the February 22, 2011 earthquake. So, the new model accurately predicts where the losses should be happening instead of spreading a small loss over large region as the previous simplified liquefaction loss model did.

The new liquefaction approach gives more confidence to both underwriters in pricing the risk from ground-related damage, location-by-location, and portfolio managers to manage risk accumulations in areas prone to liquefaction without conservatively avoiding entire areas.

What’s more, the work that RMS and others have done using the unprecedented amount of data from the events in New Zealand after Canterbury, has now also helped to develop improved models for similar regions around the globe, delivering a much better ability to manage earthquake-induced liquefaction risk in those locations.

Dr. Timothy Ancheta received a bachelor's degree in Engineering Geology at UCLA in 2001 and a master's degree and PhD. in Engineering from UCLA in 2005 and 2010. He completed a two-year postdoc at the Pacific Earthquake Engineering Research Center (PEER) at the University of California, Berkeley. For the last seven years he has studied the occurrence and loss associated with liquefaction and landslide around the globe at RMS.