Hurricane Dorian: Who Takes Responsibility for the Loss of Life?

In late 2005 I was on New Providence Island, Bahamas, producing a map to show which properties around the island were within the storm surge flood zone. The northern islands of the Bahamas had been battered by 19 feet (six meters) of storm surge in 1999 during Hurricane Floyd and flooded again in 2004 Hurricanes’ Frances and Jeanne.

While wandering around the poorer, south side of Nassau, I came across a single-story building, probably a community center or clinic, with barred windows, on which was written “Hurricane Shelter”. It was sufficiently surprising that I even took (and kept) a photo – see below, for the “Hurricane Shelter” was only two to three feet above sea level. If people gathered at this shelter as a strong hurricane approached, they would be placing themselves in mortal danger from an accompanying storm surge. 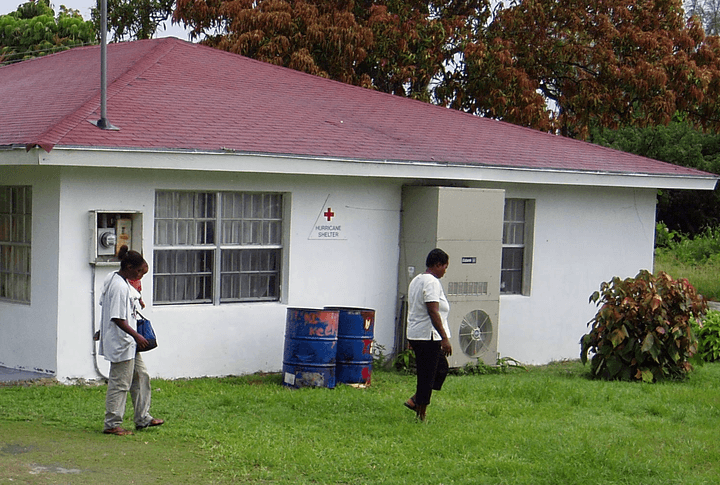 Roll forward to 2019. While the final tally of those who were battered and drowned by Hurricane Dorian may never be known, this will go down as another terrible humanitarian storm surge catastrophe. Yet these casualties were not simply the product of a natural disaster, as the media likes to report. They resulted from a failure to manage evacuations and to provide secure cyclone shelters, as can now be found in low-lying tropical countries from Bangladesh to Fiji. There are no purpose-built hurricane shelters in the Bahamas, which instead are mostly designated in schools and churches.

Most of the Bahamas is very low-lying. (The name “Bahamas” is derived from the Spanish for shallow seas). Much of the land is coral reef formed in one or other interglacial period when sea levels were 6 to 16 feet (2 to 5 meters) higher. Higher land was also built by wind-driven dunes of coral sand formed during the Ice Ages when the sea level was much lower, and the exposed reefs became eroded by storm waves. Across the islands of the Bahamas, outside these petrified dunes, elevations are rarely high enough to escape from the biggest storm surges.

Storm surge hazard around the Bahamas is highly localized. As misleadingly indicated in the original Saffir Simpson hurricane intensity scale, there is no simple relation between the speed of the wind and the height of the surge. Believing such a link led to the deaths of more than 200 people in Hurricane Katrina, who stayed in their houses on the Mississippi coast because Katrina was only Cat 3 at landfall while their houses had already survived Cat 5 Hurricane Camille.

Katrina highlighted how the size of the storm can be as important a parameter as the maximum windspeed. The bathymetry near shore also strongly affects the storm surge. With a small hurricane and deep water, the mound of water pushed by the storm escapes to the sides and underneath. Bahamian islands typically have an ocean side with deep water and an inner area of shallows. It can make a big difference on which coast the storm surge arrives.

However, across the islands of the Bahamas another key parameter for determining storm surge height concerns the length of the impacted island. With a small island, the surge goes around rather than piling up on the island shore.

The Bahamas contains a mix of long and small islands. Among the longest are Grand Bahama at 95 miles (153 kilometers) and Greater Abaco at 118 miles (190 kilometers). A long island can act like a mainland shoreline. With nowhere to escape, the surge grows higher. Meanwhile the surge at the end of the island will typically be significantly lower than in the middle.

The lesson is that extreme flood levels are highly variable across these islands. New Providence island is a mid-size target at 21 miles by 7 miles (34 kilometers by 11 kilometers). A two-meter elevation house at the Lyford Cay estate (home to Sir Sean Connery) at the western tip of New Providence has a completely different storm surge flood hazard to that of a two-meter elevation house in Marsh Harbor in the middle of Greater Abaco Island.

Unlike the neighboring coasts of Florida with their detailed maps of the 1 in 100 and 1 in 500-year storm surge flood heights, there is no equivalent official hazard mapping for the Bahamas. To generate such mapping requires a sophisticated probabilistic time-stepping hurricane wind and coupled ocean-atmosphere modeling capability – as has already been developed here at RMS (including for the Bahamas). Designated safe refuges among private residences, schools, clinics and hurricane shelters should be demonstrated to withstand, at least, a 1 in 500-year storm. Storm surge forecasts and mapped flood extents should have been provided as Dorian approached so that people did not attempt to stay in their low-lying houses.

And in determining flood and wind hazard standards for hurricane shelters that might have a fifty-year life span, we will need to include how hurricanes are changing in a warmer world. Hotter sea-surface temperatures are already producing stronger storms. We should no longer have to wait for disasters to happen to discover how they kill people. We now have the knowledge and the capacity to take action in anticipation. And we should be auditing this potential for casualties using catastrophe models and then measure how fatalities are being reduced through the provision of maps, evacuation plans and designated hurricane (wind and surge) proof shelters.

Mass casualties in hurricanes are completely avoidable. We should use the Dorian tragedy in the Bahamas to redouble our efforts to model how to prevent the next disaster.