Hurricane Season Half-Time Report: The Calm Before the Storm?

Now that we’ve reached the halfway stage of the 2019 North Atlantic hurricane season, now feels like a good opportunity to review the season to date and look ahead to what the remainder of the season might have in store.

A Quiet Start to the Season

If you thought the Atlantic had been a little quiet through the early summer, you’d be correct. The basin has had its quietest start since 2014. The strongest of these storms to date, Barry, made landfall near Intercoastal City, Louisiana, on July 13 as a weak Category 1 hurricane. RMS estimated that the insured U.S. losses from Hurricane Barry would not exceed US$500 million, inclusive of wind, storm surge, and inland flood damage, including losses to the National Flood Insurance Program (NFIP).

Following Barry, the basin went 35 days without a named storm until Chantal formed over the open water in the far North Atlantic on August 19. It marked the first time since 1982 that the Atlantic had not generated a named storm in the period between July 15 and August 19.

Why the Slow Start?

We started the season on June 1 with the El Niño-Southern Oscillation (ENSO) in a weak El Niño state. As my colleague Chris Allen explains, warmer sea surface temperatures in the equatorial Pacific disrupt the large-scale atmospheric circulation patterns, with knock-on effects (teleconnections) in the Atlantic.

El Niño acts to suppress North Atlantic hurricane activity by increasing vertical wind shear (the change in wind speed or direction with height) and by promoting the large-scale descent of dry air across the basin, including the Main Development Region. These conditions produced a hostile environment and hindered tropical cyclone development in the early stages of the season.

Furthermore, the Atlantic has experienced several extensive Saharan Air Layer outbreaks this summer, in which the warm, dry, and dusty air advected from west Africa overlies the cooler and moister surface air of the tropical Atlantic. This acts as a lid in the atmosphere and prevents deep convection and the growth of thunderstorms, which are the essential building blocks of hurricanes.

Figure 1: The extent of the Saharan Air Layer on August 27. Image: tropic.ssec.wisc.edu

After a sluggish start, the hurricane season has shifted into second gear. As I write, the National Hurricane Center (NHC) are tracking the progress of Tropical Storm Dorian through the Caribbean and Tropical Storm Erin between the Carolinas and Bermuda. As of 09:00 UTC on Wednesday August 28, the NHC are forecasting Dorian to approach the east coast of Florida by this weekend as a hurricane. Hurricane season has arrived. 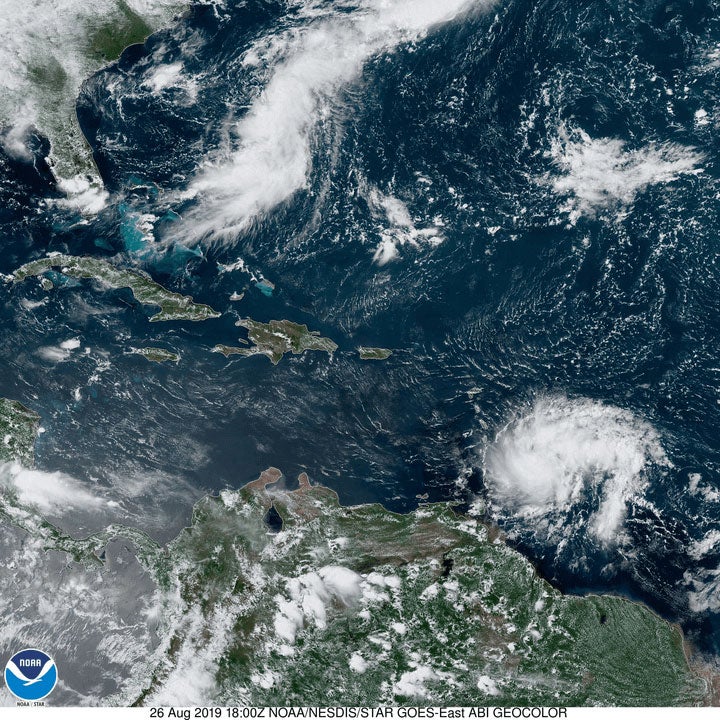 Figure 2: Satellite image of Tropical Storm Dorian (bottom-right) approaching the Windward Islands of the Caribbean, while Tropical Storm Erin (top-left) forms off the coast of the Carolinas.

The increased activity should come as no surprise. We have now entered what is historically the most active portion of the season – approximately two-thirds of hurricane activity occurs between August 20 and October 10. How the season ends up overall will likely be determined by what happens these next two months. So, what might be in store?

Latest Forecasts Predict an Active End to the Year

As is customary, many of the forecast groups and agencies update their forecasts in August as the season enters its most active period. Projections of oceanic and environmental conditions for the remainder of the season are more certain at this time of year; thus, forecasts can generally be made with more confidence and skill.

Furthermore, the probability of the season finishing “above-average” has increased from 30 percent to 45 percent. The hurricane-suppressing El Niño conditions that were present at the start of summer have now dissipated and ENSO-neutral conditions are now present. This transition means that ENSO will have less of a suppressing influence in the Atlantic and therefore environmental conditions are expected to more favorable for hurricanes to develop for the remainder of the season, leading to the increased forecasts.

Moreover, with the influence of the Saharan Air Layer expected to wane as the season progresses and sea surface temperatures across most of the North Atlantic warmer than average, conditions looked primed to support an elevated level of tropical activity through the remainder of the year. 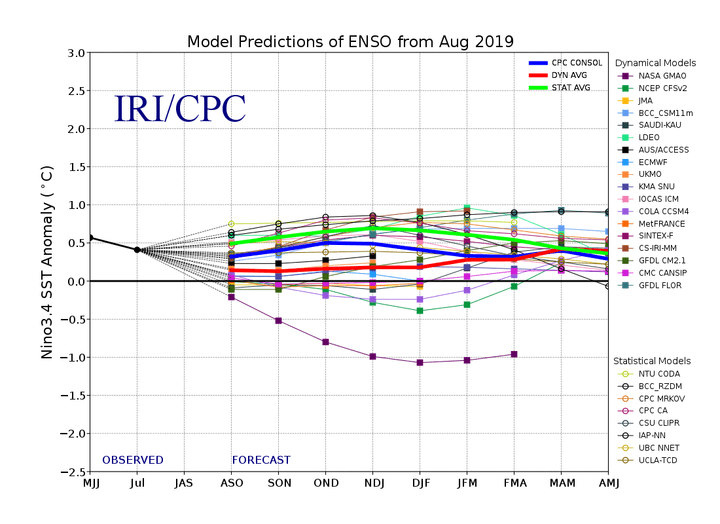 A busy second half of the season might sound a little familiar: we’ve observed elevated levels of activity in the second half of the season for the last three years (2016-18), with several memorable intense landfalling storms: Matthew (2016), Irma (2017), Maria (2017), and Michael (2018). But remember, these higher activity forecasts do not indicate that the expected number of storms to threaten land or make landfall has risen. That risk will be determined by the local atmospheric and oceanic conditions and weather patterns, which can only be reliably forecast on much shorter (day-to-week) timescales.

We’re left with more questions than answers as the season enters what I am sure will be an intriguing few months, so be sure to keep an eye on the RMS blog and our social media platforms for the very latest information on tropical cyclone developments in the Atlantic.