A postcard from Manila…

While many local government officials recognize this problem, progress is painfully slow. Housing vulnerability continues to rise. What to do?

The Issue of Our Age?

According to my favorite bricklayer, Dr. Elizabeth Hausler, housing vulnerability is the defining issue of our age. By 2030, three billion people will live in substandard homes. That’s one third of the world’s population.

Just ask Santiago Uribe Rocha, the first Chief Resilience Officer employed in a non-OECD country. In Colombia over the past 20 years, more than ten million people have moved to major cities like his, Medellín. The lack of affordable housing has led many of these low-income families to settle on the outskirts, often building haphazardly with poor quality material.

According to CENAC (Centro de Estudios de la Construcción y el Desarrollo Urbano y Regional), three out of every five new homes built in Colombia today are of “informal origin”. In other words, 60 percent live in homes that are built without any legal procedures or formal design process.

Despite acknowledging the issue, city governments often lack the means to effectively deal with increasingly vulnerable housing stock. Cumbersome bureaucracies complicate matters. In some neighborhoods, city officials require over six months to approve the retrofit of a single home.

The result: hundreds of thousands of low-income families remain significantly at risk of death, injury and destitution in an earthquake.

RMS has been working closely with Build Change since 2013. By sharing research, expertise and resources, we’ve been supporting the non-profit’s preventive programs in Latin America, the Caribbean, Nepal and, most recently, Southeast Asia. 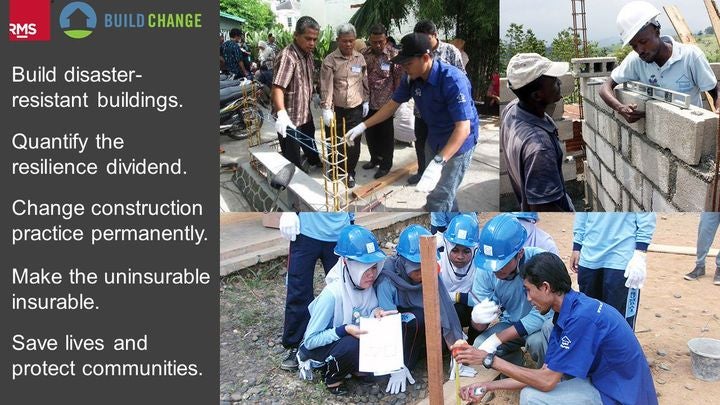 The partnership, focused on promoting the benefits of retrofitting homes for low-income families living in informal neighborhoods, is closely aligned with RMS’ overarching, societal purpose. After all, for the last 30 years, RMS’ mission has remained the same: to make communities more resilient through a deeper understanding of the impacts of extremes.

With RMS’ support, Build Change has been able to develop the basis for successful retrofit projects. Shared value abounds…

Catastrophe risk models have been vital to this process. By combining science, technology, engineering and data to simulate the potential impacts of future disasters, RMS modeling puts a number on the potential impacts of “informal” housing. Moreover, the models can be used to evaluate how risk might reduce if mitigating measures are put in place.

For example, in 2016 RMS quantified the cost-effectiveness of a proposal for a scaled retrofit program in Bogotá, Colombia. Preliminary analysis showed that over 120,000 deaths and US$2.8 billion could be avoided in a 1-in-200-year event by retrofitting homes in the five neighborhoods studied.

RMS and Build Change also demonstrated that the project would deliver an attractive return on investment. Analysis showed that the retrofits could be completed using existing local skills, with minimal training, and for less than half the price of demolishing to rebuild.

In this case, the modeled output did not just increase the institutional urgency to deal with the problem of vulnerable housing. The analytics also contributed to the wider acceptance in Colombia of retrofitting as a viable solution.

In approximately five years of formal partnership, RMS and Build Change have collaborated to greatly improve the safety of seismically-vulnerable communities. By combining our risk modeling expertise and institutional support with Build Change’s technical knowledge and grass roots approach, we’ve not only demonstrated that retrofitting in vulnerable neighborhoods is possible. We’ve also shown it’s a cost-effective way to save lives and livelihoods.

As a result, the Government of Colombia recently made the retrofitting of 600,000 homes an urgent, national priority.

Of course, our work in Latin America is by no means done. And collaborations with Build Change continue in Haiti and Nepal as well.

Immediate attention, however, has shifted to the Philippines. It’s too early to judge the outcomes. But with 69 million low-income people living in 15.6 million vulnerable homes today, the potential to make a difference is huge.

By quantifying that potential, we hope to develop a compelling business case to address what is arguably the issue of our age. By putting a number on the resilience dividend, we hope to attract the #ResilienceFinance needed to make some of the world’s most densely populate cities significantly safer.

Almost one and a half million people have died in natural disasters over the past 20 years. This is a waste of life; a waste of potential. Natural disasters also have a massive economic impact. Our models suggest natural catastrophes cost the world’s poorest countries almost US$30 billion a year on average. Hard-won development gains are regularly wiped out — and it is the poor and the vulnerable who are most impacted. In case anyone had forgotten the crippling impacts of natural disasters, 2017 served a painful reminder. Hurricanes Irma and Maria left vulnerable people in the Caribbean devastated. Somalia, Ethiopia and Kenya struggled with drought. Floods and landslides wrecked lives and livelihoods in Sri Lanka and Bangladesh. And then there was Hurricane Harvey which, along with the California wildfires, made 2017 the costliest on record in the United States. Whenever and wherever catastrophe strikes, our thoughts are with those so profoundly affected. We did not, however, need last summer’s tropical cyclones to understand that something is not working. We did not need Irma and Maria to learn that investments in resilience reduce losses from natural disasters. And we did not need the events of 2017 to know that incentives are too often insufficient to drive action in the most vulnerable regions. These truths are at heart of the Centre for Global Disaster Protection. Innovation is required to solve such complex humanitarian, political and economic problems. The impacts of recent disasters — and the need to finance reconstruction — have heightened the innovation imperative. They provide an opportunity to deploy financial instruments which catalyze investments in resilience; financial instruments which enable vulnerable communities to recover faster. RMS too knows that it is possible to stop manufacturing natural disasters. And RMS knows that financial mechanisms could in theory securitize — and therefore incentivize — the potential “resilience dividends” from investments in disaster risk reduction. After all, RMS has been intimately involved in some of the best-known thought-leadership in this space. Yet equally well understood is the fact that financial structures which incentivize resilience are difficult to implement in practice — in developed and in developing countries. There is no shortage of challenges. To move from theory to practice; to redirect capital at the required scale, ideas need to be fleshed out, structures need to be robustly designed and cash flows need to be tested. Any new financial mechanisms must pass muster with all stakeholders, lest the intended benefits evaporate. Since 1988, RMS’ mission has remained constant: to make communities and economies more resilient to shocks through a deeper understanding of catastrophes. Now, with the Centre’s help, experts from the finance, humanitarian and development communities have for the first time come together to refine financial instruments, address practical challenges and provide the interdisciplinary buy-in which mobilizes action. In this collaborative environment, innovation has happened. The recent launch of a new report on Financial Instruments for Resilient Infrastructure is a product of that innovation. RMS was commissioned by the U.K. Government’s Department for International Development to run the Centre for Global Disaster Protection’s first “Innovation Lab.” With support from Vivid Economics, re:focus partners and Lloyd’s of London two reports have been published — a 100-page technical report and a 50-page innovation report. Both are freely available here. The four new financial mechanisms examined in the report can help monetize the resilience dividend, thereby incentivizing both resilient building practices and risk financing. The outcome: less physical damage, fewer lives lost and faster economic recovery whenever nature proves too much. More is needed, of course. Policymakers and donors have a crucial role to play, not least in sponsoring pilots, funding the quantification of resilience, promoting risk-based pricing, supporting risk finance and advocating duties of care around life, livelihood and shelter. Thankfully the significant public benefits of resilience justify the investment. And now we have four new financial instruments for donors and the market to pilot in real-world situations.… 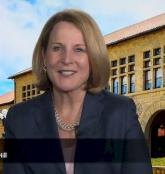