U.S. Flood Insurance: Top Five Things You Should Know From 2018

As we move full steam in to 2019, it is worth remembering that some good progress was made during 2018 with regards to advancing the private flood insurance market in the U.S. – even though Congress struggled with reform of the National Flood Insurance Program (NFIP).

Here’s five takeaway points from the past year:

1. Extending the Extension: The NFIP saw numerous extensions and a few short lapses. Just before the end of the year, Congress reauthorized the NFIP until May 31, 2019 right before the government shutdown commenced on December 22, 2018. But decisions by FEMA during the last week of the year brought uncertainty to the housing and insurance industry as it dealt with changing guidelines on whether policies could be sold or renewed during the shutdown. Ultimately, the NFIP is still operating, but the back and forth of 2018 did not bolster confidence in the stability of the program and left many asking … will 2019 be the breakthrough year?

2. FEMA Boosts the Private Flood Market: Although Congress struggled to act on the NFIP, FEMA did, with technical changes that came into force on October 1, 2018, to attract new private carriers and help existing carriers who participate in the NFIP “Write Your Own” (WYO) program.

First – removing a “non-compete” clause for carriers operating within WYO, now allows WYO carriers to offer their own private flood coverage as well as NFIP policies, with the condition that these businesses are kept separate. Second – policyholders can now cancel their NFIP policy mid-term, before its expiration date when a policyholder has obtained a duplicate policy. In combination, these steps removed hurdles that were hindering carriers from offering new flood products and making it difficult for consumers to purchase those products from the private market.

3. Long-Term Reform of the NFIP is Still Needed: Congress knows that the NFIP is in desperate need of reform. The program is US$20 billion in debt and it needs a plan to get the NFIP on a stable, sustainable path. Issues that need to be tackled range from the subsidy of repeatedly-flooded properties, outdated flood maps and data, and a lack of sufficient flood mitigation initiatives. That said, as the reversal of the Biggert-Waters Act changes showed, higher premiums for homeowners makes it a politically sensitive issue and it requires hard work and political capital to move it all forward.

4. Private Market Take-Up Is Too Low: According to a study by Wharton Business School, private flood policies account for just 3.5 to 4.5 percent of all U.S. residential flood policies purchased. Carriers are starting to offer innovative alternatives to NFIP policies with limits and coverages above current NFIP levels and writing outside of designated Special Flood Hazard Areas (SFHAs), which they all hope will increase the take-up of flood coverage.

5. The Market is Ready to Mature: The basic elements to enable the private market to move forward with flood are starting to coalesce, including the availability of data and analytics. Models and data are maturing along with the private market and there are now robust and reliable options available to the market to understand flood risk and the business opportunity it presents.

The RMS U.S. Inland Flood HD Model launched in October last year, provides that increased certainty about the risk. It brings a fully comprehensive view of sources of flooding, including tropical cyclone precipitation, and all types of flooding. The model brings new innovative approaches to account for unknown information about exposure and flood defenses seamlessly within the model. And it includes state-of-the-art vulnerability modeling to capture flood-specific relationships between hazard and damage for residential, commercial and industrial lines of business.

A comprehensive assessment of flood risk such as that provided by the RMS U.S. Inland Flood HD Model is paramount in order to be able to grow confidently in this market. The opportunity to capitalize on modeling advances, FEMA’s changes to NFIP, and potential developments from Congress on facilitating the private market, could make 2019 a real game-changer. 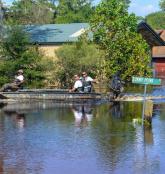 Why Long-term NFIP Reform Is a Must 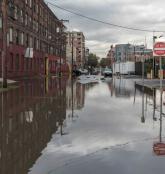 Emily Grover-Kopec is Vice President and Head of Modeling Solutions at RMS where she is responsible for the solutions and services that drive adoption and additional value around RMS’ data and catastrophe model product suite. She is currently focused on the release of RMS’ U.S. Inland Flood Model solution.

Previously, she has overseen RMS’ business strategy and relationships with reinsurance intermediaries, and focused on the development of strategic relationships and collaborative programs of research with global reinsurers.

Prior to joining RMS in 2006 from Columbia University’s International Research Institute for Climate and Society, her work concentrated on mitigating climate risk in developing countries.

Emily holds B.S. and M.S. degrees in meteorology from the University of Michigan and Penn State University.