The worst outbreak of Ebola in the DRC (Democratic Republic of Congo), Africa’s second largest country by area, with a population of over 77 million, has already claimed several hundred lives, and there have been more than three hundred and fifty cases.

Many of the Ebola cases have been in Beni (pop. ~230,000), a major city in North Kivu province, close to the Ugandan border. DRC is a failing state, where the government regime is weak, and cannot prevent militias from pillaging DRC’s abundant mineral resources. One such militia is the ADF (Allied Democratic Forces), which was formed in neighboring Uganda in the 1990s, and operates in the mineral-rich border area in North Kivu province.

The geography of the disease spread is intriguing for epidemiologists. Officially declared on August 1, 2018, this is the tenth outbreak of Ebola in DRC since 1976, but this is the first time that Ebola has affected the far northeast of this vast Central African nation. A crucial risk factor hampering the control of Ebola in this region is the conflict over mineral resources. This has limited the number of inhabitants who can be vaccinated, and restricted the access of health response teams, who are exposed to personal danger such as physical assault and kidnapping. Indeed, insecurity was a factor delaying the alert to the actual start of the outbreak, which was several months before the official declaration.

Despite the continuing threats to the security of health workers, the World Health Organization is committed to control the Ebola epidemic. A key part of the national strategic group coordinating medical intervention is MSF (Medecins sans Frontières), which has had a presence in North Kivu for over a decade. The regional map below is provided by MSF in their November 2018 crisis update and shows where MSF is active. They have established a Rapid Response Team to investigate cases and set up isolation units. In the absence of Ebola drugs that have passed clinical tests, various candidate drugs have been used which may improve prospects of survival. 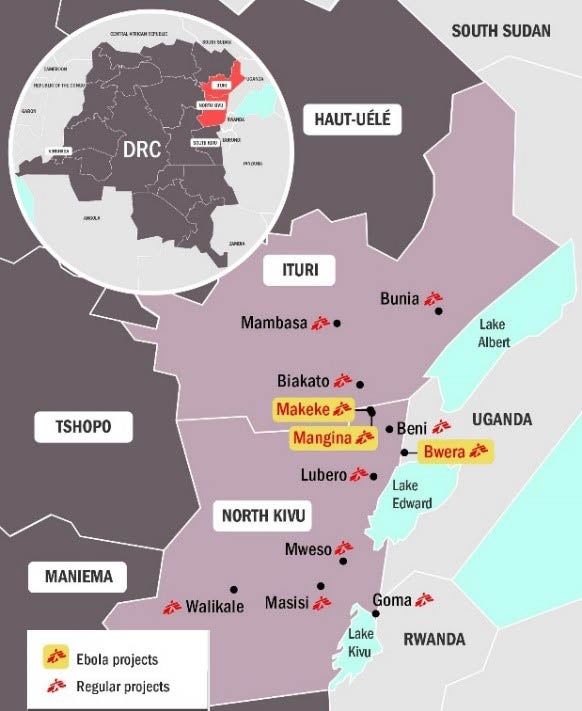 Figure 1: Map of northeast DRC with neighboring Uganda and South Sudan, showing the locations of MSF projects in the region

The Ebola epidemic is very close to the Ugandan border and poses a serious transnational threat. Accordingly, the Uganda Ministry of Health is giving the experimental Ebola vaccine (rVSV-ZEBOV) to 3,000 people at high risk of infection. This vaccine is yet to be licensed but has been approved for compassionate use in outbreaks. Epidemic containment is made much more effective by ring vaccination, which entails vaccinating contacts of confirmed cases, contacts of contacts, healthcare workers, and frontline responders.

It was almost five years ago when the Ebola crisis in West Africa began, and back in 2013 there was no vaccine available. The index case of the West African Ebola crisis was a small boy in a remote area of Guinea who played in a hollow, bat-infested tree. Guinea, like its afflicted neighbors, Sierra Leone and Liberia, is amongst the poorest nations of the world, and the most deprived in terms of social health infrastructure. These poor countries lacked the medical and financial resources to control the spread of Ebola.

Bad as the crisis was, it might have been much worse. At least there was no civil war raging. This is an endemic risk in this region. In Liberia, there were civil wars from 1989-1997 and 1999-2003. In Sierra Leone, a bitter civil war lasted more than a decade from 1991-2002. A downward counterfactual of the West African Ebola epidemic is that there might have been ongoing political conflict, as currently in DRC. Counterfactually, the whole world was very fortunate that there was a respite from civil war in West Africa in 2014-2015. The current Ebola epidemic in DRC is a reminder that political conflict and infectious disease are a deadly “perfect storm” combination.