It turns out the biggest killer in the Palu earthquake on the island of Sulawesi, Indonesia, may not have been the tsunami after all — but liquefaction. Two thousand victims of the earthquake and tsunami are confirmed but 5,000 people remain missing, many of them presumed swallowed up in extraordinary ground deformation and mudflows, which took off when the underlying solid ground liquefied. Some buildings were transported hundreds of meters, others were ripped apart, many collapsed into fragments that then became absorbed into the mud. Media reports state that in Balaroa, just a few kilometers from Palu City, many of the 1,747 houses in the village appear to have sunk into the earth. In Petobo, a village to the east of Palu, many of the village’s 744 houses have disappeared.

What we have witnessed at Palu merits the term “ultra-liquefaction”, as witnessed in the 2011 Christchurch, New Zealand earthquake when perhaps half the total insurance loss costs were a consequence of liquefaction. For Christchurch, in the eastern suburbs it was single storey houses, ripped apart by the ground movements. In the Central Business District (CBD), many mid-rise buildings had to be demolished because underlying liquefaction had led to one corner of the structure sinking by ten or twenty centimeters (four to eight inches). 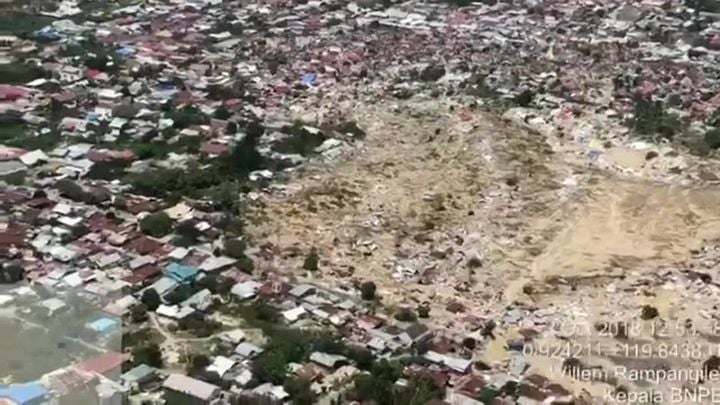 The phenomenon of liquefaction occurs in water-saturated silt or sand when the particles have settled out of still water, as when a river flows into a lake or the sea; or in land-reclamation, when seafloor sediment is pumped onshore. The sand particles touch at the corners, so that the surface load of a building, for example, gets transferred through the grains and the material behaves as a solid.

Should the sediment be shaken, however, the particles jostle and pack themselves more tightly together. This leaves less space for the intervening water, raising the water-pressure that pushes the grains of sand apart. The material now behaves like a liquid, which can flow and into which a surface load will sink — like a quicksand. The excess water pressure may be relieved if the water can escape to the surface, transporting grains of sand and leaving surface “sand volcanoes” — the hallmark of underlying liquefaction. However, even with the most gentle slope, surface soils and buildings will slide sideways on the liquefied layer, which can extend down to ten meters (32 feet) below surface.

The phenomenon of ultra-liquefaction changes everything around how we model earthquake impacts and even how earthquake scientists have attempted to classify the damage from past shocks. For a long time, it was convenient to assume that liquefaction supplemented the impacts of ground shaking, as if it made the ground shaking a little stronger. But the reality is that this is a completely different damage mechanism. As in the Christchurch CBD, buildings can be completely undamaged by the shaking, but still a 100 percent insurance loss from liquefaction.

Based on all the lessons learnt from Christchurch, Version 17 of the RMS North America Earthquake Model was the first to acknowledge that the consequences of liquefaction can be entirely independent of the direct damage from shaking. The model involved completely novel work to identify those locations prone to liquefaction: thick unconsolidated sediments, in deltas or reclaimed land, with a high water-table. The same methodology has now been used for RMS models to assess the full range of earthquake risks in New Zealand and is the new RMS modeling standard.

Yet there is another consequence of ultra-liquefaction that has yet to work its way through earthquake hazard and risk science. Since the late nineteenth century, earthquake investigators have classified the level of ground shaking using earthquake intensity scales, such as the Modified Mercalli Intensity or MMI scale. Damage to buildings provides the principal evidence used to assess shaking intensity. However, right up to the present day, damage researchers have not recognized that liquefaction is a separate damage mechanism and have not taken those areas with liquefaction, or buildings with liquefaction damage, out of their intensity assignments.

It seems likely that many years of damage observations could have been contaminated in this way, without any easy prospect of being able to go back and clean up the data. And this will have downstream consequences for earthquake risk assessment. It also means that we may seriously underestimate the casualties: as in the United States Geological Survey PAGER estimates, based on shaking alone, issued after the Palu earthquake.

Ultra-liquefaction has not only demolished many buildings. It may also come to overturn the standard paradigm of earthquake impact assessment.