The Tragedy at Palu

A version of this article was originally published in Insurance Day

The Mw7.5 earthquake in Sulawesi, Indonesia on September 28 reminds us that fourteen years after the terrible Indian Ocean tsunami, and despite significant investment in systems intended to provide tsunami warnings, the risk to life and property is not going away. To understand why the destruction and loss of life in the city of Palu, with a population of 350,000, is so great (1,300 and rising) we need to understand why this location has proved such a nexus of vulnerabilities.

First, Palu is located less than one degree south of the equator. That means it is in the “shadow zone” for tropical cyclones. In most of the world’s oceans, no tropical cyclone can exist within ten degrees of the equator, although in the western Pacific the typhoon exclusion zone can narrow down to six to eight degrees from the equator. The lack of Coriolis force at the equator prevents a collection of thunderstorms gaining a structured rotation (and tropical cyclones spin in opposite directions in the northern and southern hemispheres).

The lack of tropical cyclones means there are no significant storm surges, or even much in the way of significant wind-driven waves, and as a result people build their houses right down to sea level. This means, in comparison even with a coastal city in Philippines or China, there were many more seafront buildings exposed to a tsunami that reached no more than three to five meters above sea level.

Second, the city of Palu is at the end of a deep N-S funnel shaped fjord-like inlet defined by the major Palu-Koro Fault Zone. Although one will have to wait for a full hydrodynamic analysis, this looks to have amplified a tsunami through the combination of a shallowing sea floor and a tapering channel.

In terms of why a warning was not delivered or heeded, the city of Palu was not considered in the tsunami frontline as it was not inland of a subduction zone, as runs offshore around the western coasts of Sumatra and the southern coast of Java. The 7.5 magnitude is also towards the lower end of earthquake sizes for which a significant destructive tsunami could be expected. Moreover, the focal mechanism of the earthquake indicated strike-slip horizontal motion along the fault that ruptured, less likely on its own to have produced the vertical displacement of the sea floor required to generate a significant tsunami.

However, while the epicenter of the earthquake was located 80 kilometers (50 miles) north of Palu, the fault that broke was oriented N-S and the fault rupture appears to have passed along the inlet on which Palu is located and on through the western side of the Palu valley, right through the edge of the city. Hence while a quick inspection of the location and focal mechanism might have suggested this was not likely to be a tsunami danger (and it seems an official tsunami warning was withdrawn five minutes after the earthquake), most likely because of one or more subsea landslides this earthquake generated a tsunami, which then grew a lot taller as it broke into the city between eight to eleven minutes after the earthquake. 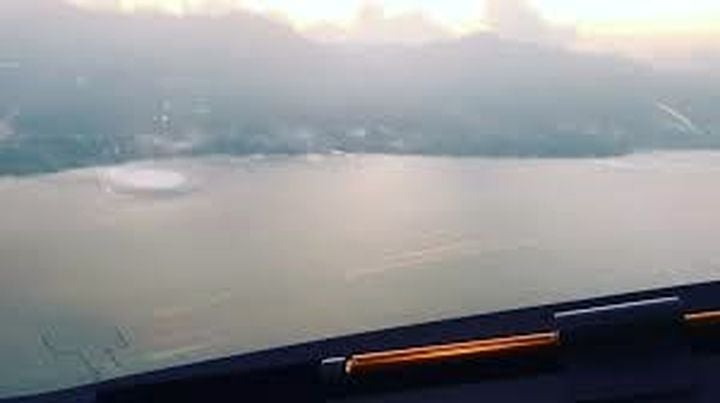 In fact, video taken from the window of a plane (see image above) which took off as the earthquake arrived, appears to show at least two areas of pronounced disturbance of the sea surface, with huge radiating waves, right along the coast of the inlet, most likely related to large underlying landslides. The sea floor on the side of the inlet is steep, descending 750 meters in only a few kilometers.

By the time the tsunami arrived, the city was already badly damaged from the shaking. Palu is built on alluvium along the delta of the Palu River and the fault rupture seems to have passed through the edge of the city. This left the ground prone to shaking amplification and many instances of spectacular liquefaction and lateral land movement, comparable to that experienced in the eastern suburbs of Christchurch, New Zealand in 2011, tearing buildings apart.

The largest of all tsunamis, generated on subsea subduction zones tend to originate 100 kilometers (62 miles) or more offshore from the nearest significant coastline. This means that the level of damage in coastal cities is not so great, but also that an informed population will know that they need to move immediately inland, to higher ground or a higher story of a well-built concrete building. However, a locally-sourced tsunami tends to leave much less time to escape.

The Palu tragedy holds lessons for a number of other cities, situated next to substantial active tectonics. One thinks of Wellington, New Zealand, where major faults cut in and around the city, capable of Mw7.5 and higher earthquakes and also with a short lead time between the occurrence of the earthquake and the arrival of a tsunami.