Schrödinger’s cat inhabits a thought-experiment designed to reveal the paradox of quantum properties. A hypothetical cat is sealed in a windowless box, in which there is a device that will administer a lethal poison, according to whether a single atom undergoes radioactive decay. Should the atom decay the cat will be dead. If the atom survives so will the cat. Only the quantum state of the atom is completely unknowable. So, the cat — in principle at least, is half dead and half alive. The simultaneous state of being both alive and dead is called a “superposition”.

While quantum behavior is not an average insurance coverage, (at least until future quantum computer cyber cover emerges), there are situations in the world of risk modeling that come close to Schrödinger’s cat — or perhaps that should better be Schrödinger’s “Cat” (short for Catastrophe)? 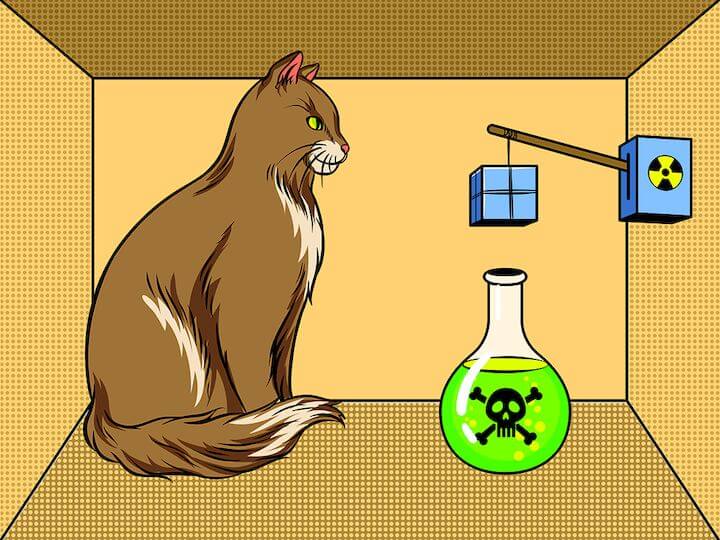 Take flood defenses tested by an extreme flood. The outcome can be both highly binary and unknowable, just like the situation inside Schrödinger’s thought-experiment box. The fanciful story of the Dutch boy who pressed his finger against the leak in the dike, to prevent the defense failing, highlights the highly nonlinear nature of dike breaching. Starting with a tiny aperture, moving water erodes a larger hole, allowing water to move and erode even faster.

There is often no intermediate state. Either the defense survives intact or it completely fails. Remember the New Orleans dike breaches during Hurricane Katrina where the dike walls fell over without being overtopped, flooding the whole northern half of the city? We cannot hope to know absolutely whether a dike will hold or fail — whether a rabbit has burrowed through the bank, whether a crack has formed during a drought. So, we may need to sustain the superposition and consider both states of Schrödinger’s Cat — with both the dike in place when the town is dry, and where the dike has breached leaving the town underwater. This superposition of outcomes can be explored in the latest RMS High Definition flood models. We need to keep our “quantum” options open. When pricing the risk, we need to have a blend of flood and no flood.

Where else do we need to consider the superposition of outcomes, where there is an extraordinary binary contrast in what happens? Take the situation where an electrical spark, caused when transmission equipment is buffeted by the wind, short-circuits to ground, and could, or could not, trigger a fire. And the fire could spread into an uncontrollable fire front, blown by the wind into a city — as happened with the nighttime Tubbs fire in California early in October 2017. Given we can model the climate conditions of the hot Diablo winds, what is the chance this turns into a multi-billion dollar fire loss? One person could have extinguished the fire where it first sparked. One thousand firefighters could not contain the fire once it had become a wind-whipped mile-wide fire front. Just as with the flood defenses — we need the superposition of binary outcomes.

Any extreme non-linearity encountered in catastrophe modeling deserves the same consideration. Dam failure or pipeline rupture after a major earthquake, or the emergence of a new virus; the outcomes may not be points on a spectrum but completely divergent. We need to superpose those binary outcomes to assess the risk.