With alerts ranging from hurricane warnings to storm surge and flood watches, the central Gulf Coast states from Louisiana to the western counties of the Florida Panhandle await the arrival of Tropical Storm Gordon.

Located only 130 miles offshore of Mobile, Alabama, the outer rain bands of Gordon are beginning to bring deteriorating weather conditions to the Florida Panhandle and central Gulf coastline. A band of deep convection near its well-defined surface center and increased lightning activity near the inner core is indicative of an organized system with the potential to intensify. This is reflected in the latest National Hurricane Center (NHC) advisory, which calls for Gordon to be a Category 1 hurricane when it makes landfall in the north-central Gulf of Mexico coastline later tonight. Gordon looks set to be first hurricane to hit the contiguous U.S. this year, though it is not the first named system to threaten the central Gulf coastline; Alberto affected Louisiana and Alabama earlier in the season as a subtropical storm.

Gordon has made swift progress across the Gulf over the past two days. The system formed from a tropical wave near the Upper Florida Keys on Monday, bringing tropical storm winds and heavy rainfall to southern Florida. There were no reported injuries, loss of life or damage to buildings across the state, according to the Florida Division of Emergency Management.

All eyes now turn to the central Gulf Coast states with a myriad of warnings in place especially for Mississippi, Alabama and eastern Louisiana, with storm surge and inland rainfall the primary concerns along the Mississippi-Alabama border region. Tropical storm warnings are in place from along the Mississippi river as far north as Morgan City, Louisiana, through east to the Okaloosa-Walton County line in Florida.

Gordon is a compact storm. The latest RMS HWind surface analysis shown in the figure below identified a small radius of maximum winds of just five to ten miles. This, combined with its forecast landfall intensity, is expected to keep damage levels relatively low from an insured perspective. Gordon’s compact size and slightly-sheared structure will also limit the risk of storm surge inundation, though two to four feet of surge is possible in some exposed coastal locations. 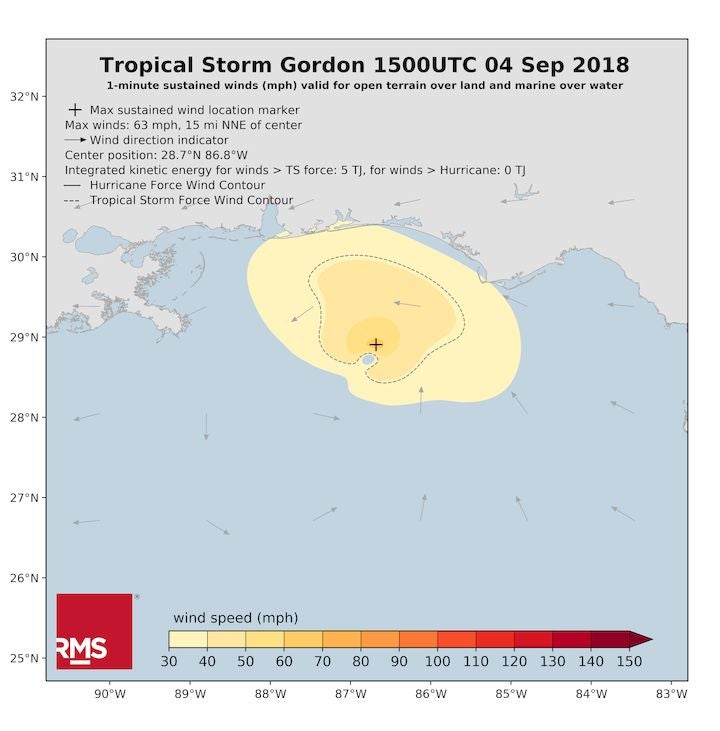 Heavy rainfall is expected along the central Gulf coast, with up to eight inches (203 millimeters) forecast over the coming days, with up to twelve inches (305 millimeters) possible in some locations. Some localized flash flooding is possible, but Gordon will not deliver the magnitude of rainfall and subsequent flooding we saw from Hurricane Harvey one year ago. Gordon’s forward advance is slowing as it approaches land, but it is not forecast to stall in the same manner as Harvey.

Preparations are in full swing in an area well versed in hurricane preparedness. A state of emergency has been ordered by both Mississippi Governor Phil Bryant and Louisiana Governor John Bel Edwards. Taking no chances, New Orleans is readying itself, with Mayor LaToya Cantrell issuing a voluntary evacuation order, currently in place for areas outside of the levee protection system near New Orleans. All city offices for non-essential operations are closed in New Orleans today (Tuesday, September 4). According to the Flood Protection Authority, some 21 floodgates on the Lake Borgne Surge Barrier, near New Orleans, have been closed in anticipation of heavy rainfall.

Following a relatively quiet start to the 2018 season, we should not be surprised with the uptick in tropical activity in the Atlantic. We have now entered the climatological peak of the hurricane season and September is historically the most active month. We only need to look back at this time last year; we were in the middle of dealing with Hurricanes Harvey, Irma, and Maria, so September and even early October, always has the power to deliver memorable events.