Where Is Insurance in the Post-Grenfell Tower View of Fire Risk?

The first professionals on the stand in the Grenfell Tower Inquiry were the London Fire Brigade, quizzed on their lack of training around managing evacuation from the devastating tower block fire in North Kensington, West London on June 14, 2017. Coming soon, the inquiry’s focus will turn to the architects and fire engineers, the manufacturers of cladding material and the regulatory procedures for determining safety.

Yet, one actor conspicuously missing from this parade of experts is insurance.

You might think that insurance would, by now, be leading the agenda in calculating the fire risk to tower blocks and showing how mitigative action, such as removing or replacing flammable cladding, would directly convert into both lower risk and lower premiums. For this calculation around fire risk has the potential to drive other responses, including which buildings are too dangerous to be habitable.

Yet this calculation cannot come from empirical data on fire losses, as supports most actuarial fire pricing, because this fire is without precedent, at least in the U.K. Instead it will have to be the product of “large building” stochastic fire risk modeling. 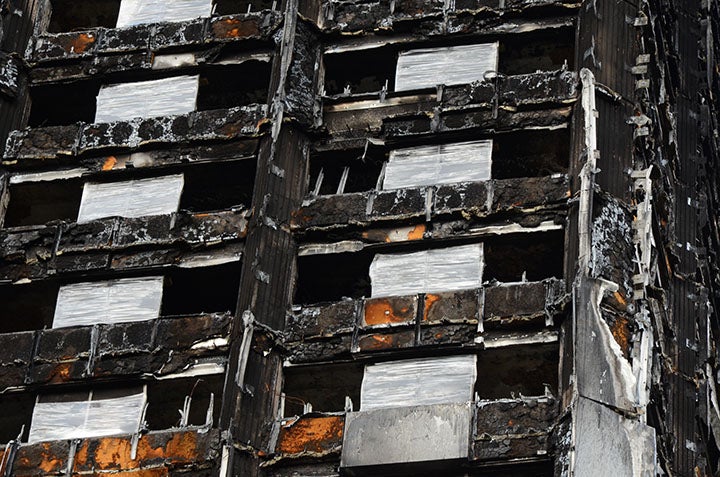 The method developed by RMS for calculating fire risk cost exceedance probability (EP) curves in large and complex buildings simulates multiple potential fire starts and spreads. A fire can spark in any compartment in a building. The risk of ignition and the fuel load will, of course, vary significantly from a space stacked with empty filing cabinets to one full of acetylene cylinders and welding torches.

Then comes the question — what is the chance the fire escapes from one compartment to its neighbor? For a concrete building the weakest link is typically the fire door, but it could also be a window or staircase. To break out of a second or third compartment we have to burn through yet another fire door, so the probabilities of a fire spreading through the whole building start to become quite remote, especially when there is a sprinkler system, dousing the fire within each compartment. Yet what if the performance of each fire door is not independent of all the other fire doors; what if the failure behavior of the individual components is correlated?

What can drive such correlation? In a bout of hot weather perhaps all the fire doors have been wedged open. Or the doors have been tied open by builders and who are now melting tar on the roof. Or the sprinkler system has been switched off for maintenance. Or the sprinklers have no water pressure after the pipes have been disabled by strong shaking, which also caused a short circuit that triggered the blaze. (This is why fire risk rises dramatically in the aftermath of a major earthquake.)

The risk of a large fire is almost totally dependent on these sources of correlation among ignition and fire-spread. To model the risk, we need to focus our analysis on identifying every possible way in which such correlation could occur.

How does this work for fire risk in the 24-story Grenfell Tower? When the building was constructed back in 1974, the original intent was that any fire would be contained within one of its 120 concrete walled apartments. The fire door was intended to hold for as long as it takes the fire brigade to arrive to extinguish the fire. Therefore, the probability that a fire could spread through the whole building was minimal. Now add some correlation to the fire spread — for example, if the outside of the concrete building has been covered with an inflammable cladding that is only a plastic window frame away from transferring a fire out of, and into, the apartments. The risk calculation is transformed.

In a year’s sample ending in 2016 there were 31,367 fires reported among the 23.7 million dwelling units in England, or 1.3 incidents per thousand dwellings. In a tower block with 120 “dwelling unit” apartments, that average would work out as a 16 percent chance of a fire somewhere in that block, in a given year. However, on the assumption that these fires will only consume the fittings of a single apartment — perhaps a maximum of £50,000 in any one of the 120 apartments in the building — the whole building annual fire risk cost is less than £8,000.

Now let’s assume that the fire can spread via the cladding. For a ten percent probability of the fire spreading, and a whole building value of £20 million, that would be a technical rate of £320,000 per year: forty times higher than the “no spread” case. And that’s before we consider the human costs, casualties, displacements and liabilities. The lead insurer for the Grenfell Tower has estimated their total claims from the Grenfell fire covering both property and liability (and before reinsurance) will reach £50 million.

Informed by such fire risk modeling, insurers could now be identifying the dangerous buildings, ramping up the insurance costs to highlight intolerable levels of risk.

Immediately after the fire, insurers discussed applying price hikes or exclusions for buildings identified as having dangerous cladding, but a July 2017 report from Marsh noted “Feedback from insurers to date suggests that they will not seek to withdraw or change coverage for existing clients where cladding is present.” (The insurer covering property and liability for the Royal Borough of Kensington and Chelsea, the Norwegian company Protector, could not even consider ramping its charges as it was only three months into a five-year contract at the time of the fire, for which they charged £2.2 million premium.)

Since the Grenfell fire, insurers have chosen to lie low, perhaps concerned that promoting risk-based pricing would be viewed by the press as profiteering. The Association of British Insurers commissioned a study from the Fire Protection Association, acknowledging that “…the current cladding test standard requires urgent review” and that “…real-life fires could burn hotter, spread faster and last longer than those in the safety checks.”

Away from the spotlight, insurers have not been shy about imposing price hikes on professional indemnity covers to those firms designing and fitting cladding to tower blocks. One company, Dane Architectural Systems found the cost of a £10 million professional indemnity policy increased from £24,000 to £240,000, eventually reduced to £177,000, but with a hundredfold increase in the excess from £5,000 to £500,000.

The risk modeling framework already exists by which to explore tower block fire-loss EP curves. Even if insurers choose, for now at least, to limit their price hikes, the owners and occupiers of these buildings deserve to see some objective measure of how these risks can be quantified.