It has been a brisk start to the Pacific Hurricane Season. Within the first two weeks of June, there have already been two hurricanes off the Pacific Coast of Mexico recording Cat 4 maximum sustained winds on the Saffir-Simpson Scale. On June 7, Hurricane Aletta, tracking far off the coast of southern Mexico, saw a period of rapid intensification with winds doubling to 140 miles per hour (220 km/h) within 24 hours before weakening and dissipating. The second named hurricane, Hurricane Bud had a similar intensification, going from 50 miles per hour (80 km/h) on June 10, to 132 miles per hour (212 km/h) some 24 hours later. Bud’s legacy now looks to be a weekend of heavy rain over the Baja California peninsula. For the North Atlantic Hurricane Season, the hurricane tally stays at zero.

So, lots of activity already in the Pacific, but overall, how different is storm activity on the Pacific compared to Mexico’s Atlantic Coast? RMS estimates that for Mexico, around 40 percent of the annual average loss from wind comes from the Pacific. To evaluate the complete hurricane risk for Mexico, the upcoming Version 18 release of the RMS® North Atlantic Hurricane Model will model both the Atlantic and Pacific coasts.

As Aletta and Bud shows, for many Pacific Coast hurricanes affecting Mexico this pattern of rapid intensification, followed by rapid weakening is a signature trait. And when RMS considered expanding modeling to cover the Pacific Coast, two hurricanes in particular provided the motivation — these were Hurricane Patricia in 2015, and Hurricane Odile in 2014.

Patricia has become a storm of record for RMS. A fierce Cat 5 storm, it had increased its maximum sustained winds by 125 miles per hour in a 24-hour period during October 22-23, 2015, with a peak at 215 miles per hour. But it also experienced rapid weakening, it made landfall as a Cat 5 near Cuixmala, a 25,000-acre private estate of beach, jungle, and nature reserves. It was the strongest recorded hurricane to hit Mexico’s Pacific coast since records began in 1949.

Hurricane Patricia weakened even faster than it strengthened as it came into contact with the mountainous terrain of the Sierra Madre Occidental mountain range. By 09:00 UTC on October 24, maximum sustained winds had dropped to 75 miles per hour (120 km/h), equivalent to a weak Category 1 hurricane, and 12 hours later, maximum sustained wind speeds reached only 30 miles per hour (45 km/h).

In September 2014, Hurricane Odile also meandered off Mexico’s southern Pacific Coast, before rapidly intensifying on September 14, moving from a Cat 2 to a Cat 4 event in the space of just six hours. It made landfall on September 15, near Cabo Saint Lucas on the southern tip of Baja California Sur with winds at 125 miles per hour (205 km/h). It caused over a US$1 billion in economic losses.

Through the reconstruction of these events, together with the available event set, and using the components from the North Atlantic Hurricane Model, we can now get a combined view of the hurricane risks for both coasts. There were many challenges — data availability and reliability for Pacific Coast events, especially in terms of intensity varies greatly pre-1970. Data goes back to 1851 for the North Atlantic, but only back to 1949 for the Eastern Pacific. Understanding whether a storm is extratropical is very important, and new research from the University of Arizona questioned extratropical flags within HURDAT covering the eastern North Pacific. Many HURDAT storm points were located to the south, but research from Kim Wood shows that many extratropical storms track further to the north that first thought.

What does our modeling show when looking at both coasts? As an example, when looking at 50-year return period winds the highest winds are in the Yucatan peninsula on the Atlantic Coast, but also along the Pacific Coast from Sinaloa to Michoacán, and for Baja California Sur.

With the RMS North Atlantic Hurricane Model providing a combined event set for the Pacific and North Atlantic, clients will now be able to deliver combined analyses, to compare with areas within the U.S. For instance, when looking at loss costs, the Southeast U.S. is similar to Baja California Sur and Sinaloa to Michoacán; the southwestern coast of Mexico is more similar to the U.S. Northeast.

As a final note, I would also like to thank everyone who has helped RMS to win accolades such as the “2018 Latin America Risk Modeler of the Year”, and RMS reassures its commitment to innovation across the Caribbean and the Latin America region.

Irma in Miami: A Personal Perspective

19:00 UTC  Sunday, September 10 Victor Roldan, regional director – Caribbean and Latin America, RMS I live in Brickell, in the Financial District of Miami, in a condominium block of some 30 stories on Brickell Bay Drive and SE 12th Street, very close to downtown Miami. The block faces the waterfront, four blocks from the Four Seasons, with the Mandarin Oriental just over the water on Brickell Key. This is an area that the insurance industry knows well, with many RMS clients operating their Latin American and Caribbean business from offices in and around a square mile from here. I have lived in Miami for the past 15 years, and it is a great city. Similar to most Miami residents, I have experienced hurricanes, I know the difference between a hurricane and a major storm, and in my view here from my block some ten floors up, and despite of being 130 miles away from the eye, this is the worst I have ever seen. My family is safe, they are out of the state. Winds are battering the coast, consistent 100 mph winds, and as of 12:15 am ET (04:15 UTC) today Sunday, the streets were two feet deep in water. Lots of trees have fallen, street lights have been toppled over, high tides are making the situation much worse. This morning, I managed to take some video footage of the scene around the neighborhood, with flood water levels on the surrounding roads rising to three or five feet in some areas, winds are still range around 70 to 100 miles per hour. The situation will obviously get worse, but I am safe and OK, and looking forward to Irma dissipating very soon. … 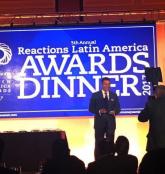 And the Winner Is….

As regional director for RMS, Victor Roldan is primarily responsible for introducing catastrophe modeling to the Latin American insurance industry.

He works with clients in the region to implement innovative pricing, as well as optimize capital, and create portfolio management solutions based on a deep understanding of catastrophic risk powered by the RMS Cloud Platform.

With a strong background in IT, Victor is one of the leaders in the Latin American Insurtech industry, and was part of the original team that launched Quepasa.com, the first Spanish language portal. He has served as regional vice president and GM of Mitel Latin America and Caribbean Division, where he led the transformation of the Latin American business from infrastructure to Cloud and SaaS services.  He was responsible for overseeing operations, direct and channel sales, resellers, and partners in more than 22 countries.