Christopher Allen is senior analyst – model development, working within the Event Response team at RMS, and is based in London. He joined fellow employees from RMS and RMS clients on our annual Impact Trek in Nepal during March this year. This is Chris’s account of his time in Nepal.

On Wednesday, March 21, eight somewhat-still-jetlagged RMS Impact Trekkers left the Summit Hotel in Kathmandu bound for the village of Dhunkharka, three hours’ drive southeast of the capital. We were going to see some of the retrofitting work that was being done by Build Change, a social enterprise partner of RMS that aims to build local capacity for safer construction practices. As we weaved our way through Kathmandu traffic (a chaotic affair at the best of times) we noticed several of the characteristics of the capital’s buildings that had been pointed out to us by Build Change over the past few days: soft story, three-floor brick masonry, new construction sprouting up with reinforced concrete columns, the occasional ground floor still occupied by goats or buffalo…

After about an hour we had escaped the worst smog of the capital and were heading into the hills, passing brick kiln after brick kiln. Not long after, we turned off the paved road and our Jeeps began their bumpy ride on a dirt track that wound its way higher and higher up the dusty hillside. At around 10.30 a.m. we stopped in a small village for lunch. This was, naturally, several servings of daal bhat, a meal of rice and lentil soup that most Nepalis eat twice a day as a staple meal. While we were waiting for the food to arrive, I had the opportunity to practice some very hastily learnt Nepali with some local schoolkids: “Kasto cha?” (How are you?) and “Timro naam ke ho?” (What is your name?)

After eating we walked a short distance down the hill to inspect a model home that Build Change had constructed. Different structural elements had been color coded (see picture below) to make it easy for the design to be copied: the sill band, the through stones, concrete spacers etc. Nearby was a billboard which explained how each feature improved the building’s performance in an earthquake. The building was not left empty though, it was being used as an antenatal center where women could go several days before giving birth, being just opposite the medical clinic. 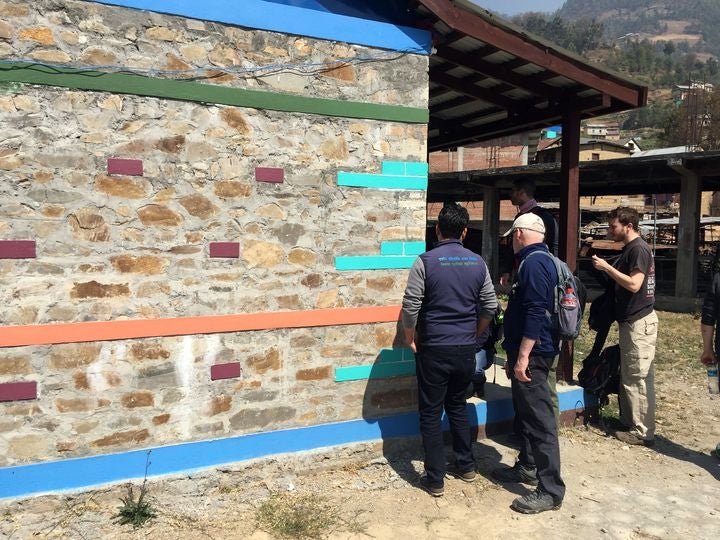 We returned to the Jeeps and continued up a steep rocky lane. We didn’t get far though, after about five minutes the track turned into a bog and we had no choice but to abandon the vehicles and walk the remainder of the way to Dhunkharka. This turned out to be a far more pleasant experience than driving however, as we could take in the views, the sunshine, and chat to the Build Change staff with us, Kiran and Dinesh. After about a twenty-minute climb we arrived in the village, which was little more than a number of scattered houses and homestays.

We could see earthquake damage to some of the buildings, and one had even been demolished as it had been deemed unsafe. Kieran took us further uphill to visit the house of an elderly couple that Build Change had retrofitted to make safe after the earthquake. They were kind enough to let us inside, and we inspected the “soft retrofit” wooden columns that had been installed all the way from floor to rooftop to provide several spines to the three-story home. The elderly couple were happy to talk to us about the earthquake and how frightening it had been, and animatedly told us their plans to turn their house into a homestay in order to raise some more money.

Our next stop was the Build Change local training center. This was a home in a neighboring village where local builders and laborers could learn how to retrofit, step-by-step. Build Change has just begun teaching a structured competency-based course, where attendees are taught together then assessed individually on each element of the course, for example, correctly assembling the joists or replacing the gable wall. For me, the most fascinating aspect of the retrofitting process was the use of huge ratchet bands (see picture below) around the entire outside of the building in order to hold it together while the retrofit was being completed. 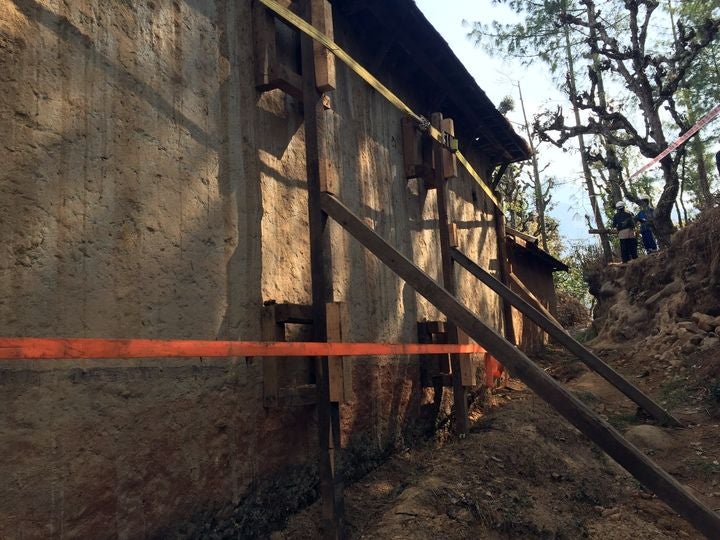 It was clear, however, that Build Change did not just concern themselves with engineering but thought much more widely about how to understand and engage with the whole community where they worked. As an example, laborers who had to miss a day’s work in order to attend the competency-based training were paid a per diem.

All too soon it was time to leave and we piled into our Jeeps again, somehow managing to doze off on the ride back despite the rocky track out of Dhunkharka and remaining sound asleep as the cars entered Kathmandu, swerving to avoid yet another cow ambling across the ring road.