Pete Cormier is a lead cat analyst for Liberty Mutual, and joined employees from RMS on our annual Impact Trek in Nepal during March this year. This is Pete’s account of his time in Nepal.

In March 2018, I spent 10 days with a team in Nepal at the invitation of RMS to volunteer with Build Change, a non-governmental organization (NGO) which is helping the re-building efforts following the April 2015 earthquake. The massive Mw7.8 earthquake caused approximately 9,000 deaths, 22,000 injuries and damaged more than one million homes, schools, and businesses at a cost of US$10 billion, which is about 50 percent of Nepal’s annual GDP (Source: Wikipedia).

During this trip, we were based in Kathmandu, the capital city of Nepal with a population of one-and-a-half million, with three million more in the surrounding Kathmandu Valley, which is undergoing rapid urbanization. Kathmandu is considered the cultural and commercial center of the country and boasts many of the region’s holiest sites including the Pashupatinath Temple, Kathmandu Durbar Square and the Boudhanatha stupa, a focal point of Tibetan Buddhism (see picture below).

During our time in Kathmandu, the city’s streets were continually clogged with traffic, made up of pedestrians, cars, trucks, and a plethora of fast-moving, nimble motorbikes — clearly the vehicle of choice. Many of the pedestrians and drivers wore face masks to thwart the vehicle exhaust fumes as well as the smoke from the numerous brick-making facilities surrounding the city. 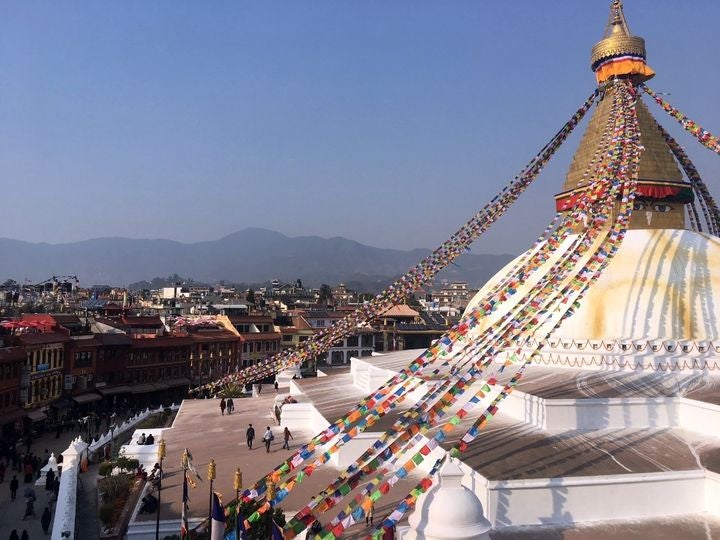 Figure 1: Picture of Boudhanath Stupa taken from a rooftop restaurant.

During our time with Build Change, winner of the 2017 Skoll Awards for Social Entrepreneurship, we learned how this lean, mission-focused organization is helping the region rebuild by streamlining the reconstruction design process. Since the earthquake, Build Change has worked with government agencies, municipal leaders, local engineers and contractors, and the Nepali Engineering Association to advocate for the use of cost-effective, earthquake-resistant new construction and retrofit design templates.

The organization has 110 staff in Nepal and most of the positions are technical or engineering, which are filled by local Nepalese employees. Build Change’s philosophy is to engage homeowners, builders, and the entire community in the re-building effort, leaving them with the skills to continue long after the NGO has left. The competency-based training programs developed by Build Change provide local builders with hands-on technical skills to construct earthquake resistant structures.

On one of our field trips, we visited a home that Build Change recently retrofitted in the village of Dhunkharka. Our journey to this remote hillside village, located three hours outside Kathmandu was a lesson in the logistical challenges facing the reconstruction effort in this region. The way to Dhunkharka varied from a paved surface, to dusty narrow streets winding through busy, pedestrian-filled villages to a to a spine jarring, pothole-filled dirt road between adjacent farmlands, to finally a steep, single-lane dirt road climbing up to an elevation of 2,050 meters. Our 4×4 vehicles were unable to make it completely up this last part due to an impassible stretch of road, so we all got out and walked the remaining distance, which caused at least this hiker’s legs to burn and lungs to gasp a bit before we reached the home at the top of the hill.

At the retrofitted house, we met the homeowners (pictured below), who were delighted to open their upgraded home, so we could see the modifications, which included support beams fastened to the existing structure pictured below. We learned from Kiran Shrestha, the supervising engineer, that before starting work in a village, Build Change representatives meet with the village community to determine the most vulnerable residents. This couple was chosen by their community for the first retrofit project. Kiran supervised the reconstruction crew of two skilled workers and four unskilled workers. We learned that the crew traveled the same steep dirt road we walked up, from the larger village below, which took them one-and-a-half-hours each way, twice a day for the duration of the reconstruction. 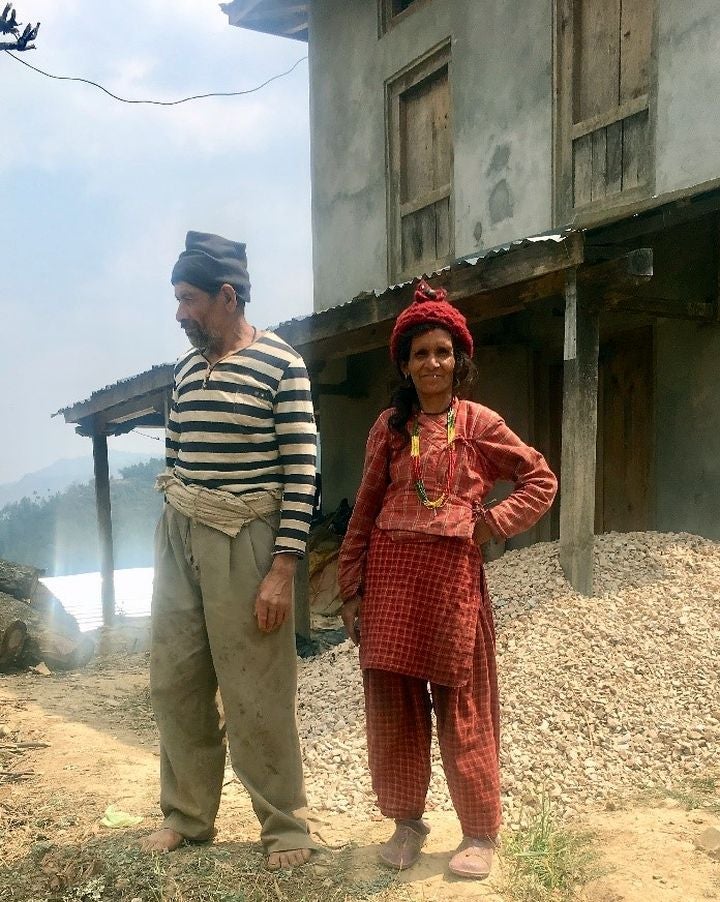 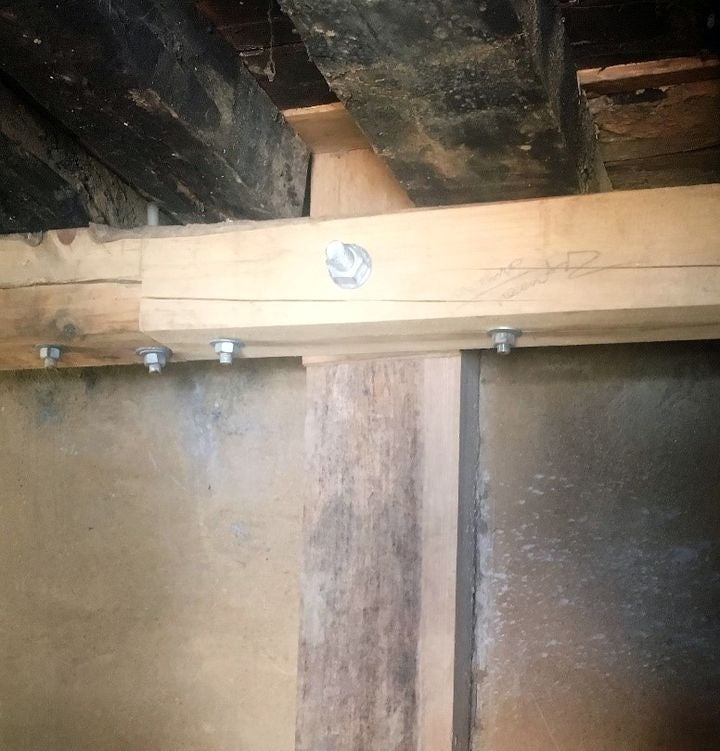 Our field trip demonstrated the daunting logistical challenges facing an NGO such as Build Change, that need to deliver building materials and engineering expertise to remote hillside villages like Dhunkharka, which as I write were heavily damaged by the earthquake two years ago this month. As further evidence of these transportation challenges, on our return trip down the road from Dhunkharka, we were sidelined for an hour at a helpful home stay residence, while we waited for the crew of a large delivery truck to repair a flat tire, which blocked the road below us in both directions until it was repaired.

We concluded our day’s field trip with a visit to the Build Change competency learning center, where we learned how local builders can become certified after demonstrating their proficiency on more than 20 separate and distinct building procedures. Below is a diagram of the shoring kits from the competency training and a photo of Kiran, supervising engineer with the author. 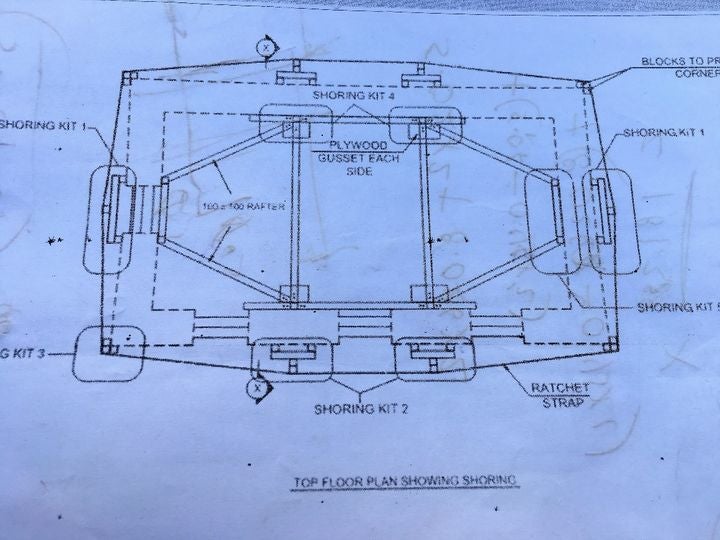 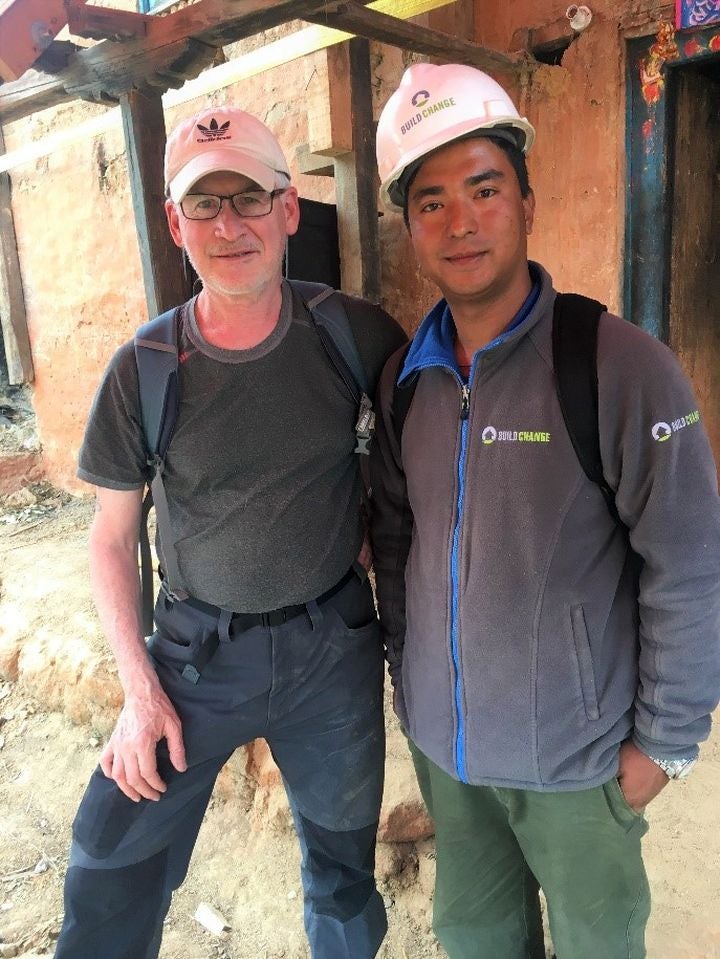 As a final note, I want to comment on the strength and resiliency of the Nepalese people I met during my 10 days in Nepal. I came away deeply moved by the kindness and resourcefulness of the people of Nepal. On my last day in Nepal, I discovered a poem in The Kathmandu Post, a local newspaper. The poem is entitled I Walk and was written by Supriya Khadka, a college student and president of St. Xavier’s literary club. I present it here, having been fortunate to obtain her permission to do so, because I believe it evokes the determination and strength of spirit of the Nepalese people.

I Walk by Supriya Khadka

My naïve steps — slow and steady,

I can feel a pull from behind,

But, I do not stop

My goal is so far ahead,

It all seems so muzzy,

For people to think there is nothing,

it only gets clearer as I march ahead;

So I ignore what they say,

And pushing everything aside, I walk

When I trip, they don’t help

Every woman for herself

I am enough, I am strong

My legs wish to halt, they wish to cease

My eyes want a glance, of what’s behind

But, my heart is stubborn, and brain is stern,

Checking all the desires,

If you would like to get more information on the inspiring work that Build Change is doing, please visit their website.

Pete is a Lead Cat Analyst, working for Liberty Mutual in New York.