Working with Build Change, an earthquake engineering charity and RMS philanthropic partner, and seeing their work alongside other NGOs all helping Nepal rebuild after the 2015 earthquake, is a source of inspiration for me as I continue my sabbatical in this amazing country. To read about my initial view of the progress made in Nepal, please read my earlier blog.

It is an exciting time for Build Change, as in December 2017 they signed contracts for two long-awaited new projects that the United Nations Office for Project Services (UNOPS) and Build Change as lead technical agency, have been discussing with donors for many months.

Work can now start on:

1. A U.K. Department for International Development (DFID) government-funded project to scale-up seismic retrofitting across all 31 earthquake affected districts. After approval of Build Change’s initial retrofitting type design (see my previous blog) and corresponding training for government field inspectors, this methodology has already been introduced to the 14 most heavily earthquake affected districts. There is now the opportunity to scale this up across a wider area and ensure local communities are aware of its possibilities.

This project will enable homeowners greater access to government-approved seismic retrofitting through increased capacity, skills, and awareness to boost demand, providing a safe, time-saving, and cost-effective alternative to new construction.

As discussed in my previous blog, retrofitting has tremendous potential within Nepal and other countries in the region for both reconstruction and importantly pre-disaster prevention. It is good to see this option gaining further traction within both the government and donor communities.

To date, reconstruction work in Nepal has focused on those who have already started construction and therefore have the means and resources necessary to rebuild. However, the most vulnerable homeowners face insurmountable challenges just to start, and have often spent their first grant installment on other critical needs and are then left behind in the rebuilding effort.

This pilot project uses an innovative three-tiered methodology to help engage the most vulnerable homeowners who have not yet started construction. The project will provide access to information, designs, and practical assistance to enable homeowners to start the reconstruction of their home. This will be delivered through mobile Technical Support Teams (TSTs) and uses the concept of tailored assistance packages. The pilot hopes to identify whether this approach will succeed, and if so, the methodology would be scaled out across further districts.

It looks like there is lots of work ahead for the team this build season. Something I had not expected was the negotiations and time taken to get projects over the start line, and that raises some personal concerns. Not only do costs rack up on all sides but often delays impact the very people these projects are trying to help, reducing the amount of time available to successfully execute the project. As the build seasons are relatively short here (October – June) a few months delay in starting can significantly reduce the possibilities, although oddly not the donor’s expectations! I can understand that everything needs to be buttoned up contractually and commercially, but you feel there is a large amount of potential waste in the process.

On the Ground in Nepal

My work over the last month has encompassed several different areas aimed at supporting Build Change operations where it is required most. The most interesting of these are:

1. Reviewing a Build Change report on flooding in the Terai, a lowland region which spans the length of Nepal on the Indian border. Earlier this year, monsoon rains produced severe flooding in the Terai region of Nepal, as well as in Northern India and Bangladesh. In Nepal, flooding was the worst seen for 15 years and led to several villages suffering from water submersion and associated high levels of damage. In August 2017, Build Change did a reconnaissance visit to the region to understand the construction typologies, observed damages, and importantly identify conclusions for how buildings there can be made more resilient in the future. The hope is that this report leads to further projects in the flood affected communities, a peril that Build Change has not focused on before.

2. Exploring the potential for greater enforcement of building codes and monitoring of construction. One of my key observations is that while building codes are generally considered satisfactory and include earthquake criteria, there appears to be limited enforcement or monitoring whether construction is being done in line with the designs — and often this is not the case.

Many organizations have previously highlighted these problems, and the National Society for Earthquake Technology (NSET) did an earlier project studying this very issue. Previous projects highlighted three critical areas to be addressed; limited technical manpower to enforce an effective field monitoring system, difficulties in identifying homeowners building without permits, and devising an effective way to take action against violations. Build Change are well positioned to resolve these issues through their increasing use of technology and systems. I am working with Build Change to form ideas for potential projects examining this important area, which is wider than just the reconstruction.

During my time in Nepal, I have become aware of many local and international NGOs, covering so many areas involved in both the earthquake recovery as well as longer term projects within the country. Two NGOs out of many I have met, show a different side to the reconstruction work:

HELP is a Nepali charity improving education for the children of Helambu district, about 50 miles north of Kathmandu. They are Mondo Challenge Foundation’s partner in Nepal and the majority of their programs are funded by the U.K. based charity. HELP runs some good initiatives including a partnership with Cambridge and Oxford universities to provide short-time volunteers for schools. After the 2015 earthquake, schools were one of the worst affected building types in this district — luckily schools were empty when the earthquake hit at lunchtime on a Saturday. HELP has now moved into the rebuilding of their affected schools, and from a Nepali perspective this is understandable as everyone does their own construction, but more difficult to understand from a Western perspective as earthquake engineering charities could provide this instead.

Jimmy Lama, executive director at HELP (pictured back row, second from right) works with a local family whose house had been destroyed by fire. HELP provides the children with clothes, school items etc. to bring normality back to family life.

I first encountered HELP when visiting Nepal in January 2017, spending a day at their locations, reviewing construction and providing suggestions for future improvement. It was good to see that they acted on my suggestion to obtain the services of a well-trained local structural engineer, and in combination with the government-approved school designs they are now producing higher standard building design documents.

In early December 2017, I spent two days back in the field with HELP and discovered the finished schools appear to be constructed to an acceptable standard, although there were several key takeaways which the charity is acting on and link well to my work on building code enforcement during construction:

2. Address first-time construction issues so they are either fixed or redone — I saw a wall which was not level, and although when the roof was constructed on the ground it was flat, it didn’t sit flush with the top of the wall. Rather than rejig the roof or other options, the builders hacked a hole out of one of the reinforced concrete columns exposing the reinforcement and undermining the strength of that column.

3. As you get further away from major cities, workmanship tends to get worse and therefore more care and monitoring is required. Getting the correct materials and trained builders is difficult but some of the concrete I saw was not good with very poor compaction, incorrect mix ratios and very weak strength.

The DZI Foundation is a Colorado-headquartered charity supporting the implementation of community-driven programs in very remote areas to improve the whole community. Their work ranges from school building and basic infrastructure, to agriculture, supporting income levels through to delivering drinking water systems. They provide an interesting contrast to Build Change and one that gives great insight into the complications of working in rural Nepal.

These communities are multiple days walk away from the nearest road which highlights some of the complicated logistical challenges with working in these remote locations. The schools that DZI build in these communities need to be transported by porter and therefore must be designed in manageable loads from both a size and weight respect. This really drives the design of these earthquake resistant structures and is very different to the drivers for other regions in the country.

For DZI, this led to a structural solution of light gauge steel due to its relative low weight, cost of transport, resistance to wind loading and ability to require minimal technical construction — various parts of the frame are welded in Kathmandu, and simply bolted together on site. 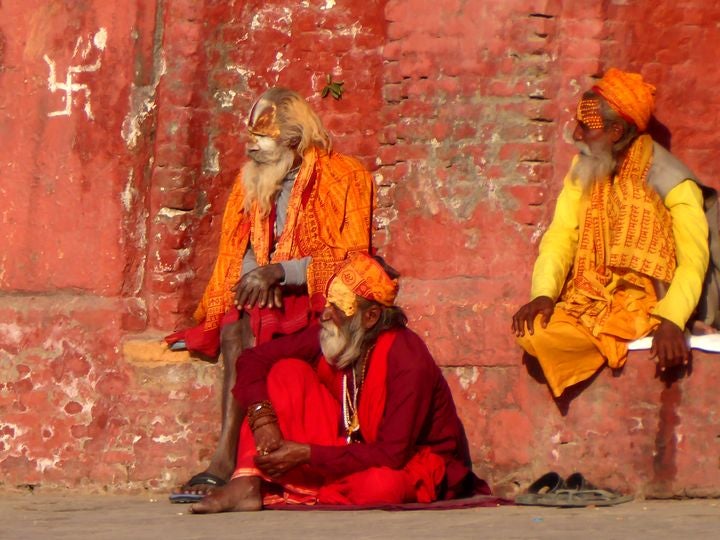 Outside of work, this country continues to amaze me. I spent a day at two of the most religious sites in Kathmandu — the Pashupatinath Ghats, the holiest Hindu site in the city, and the Boudhanath Stupa, the holiest Tibetan Buddhist temple outside Tibet. 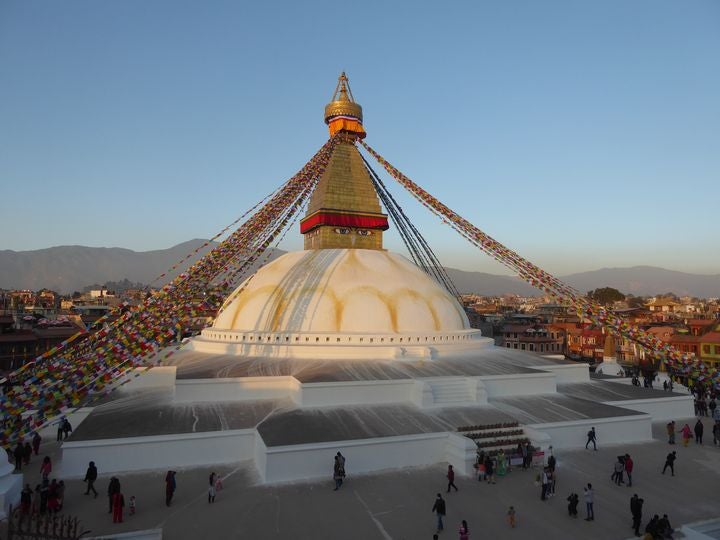 Both places highlight how Hindu and Buddhist communities live side-by-side here and often worship at the same locations. They were incredibly emotive places that will live long in my memory and are definitely worth inclusion in your itinerary if ever in Kathmandu. 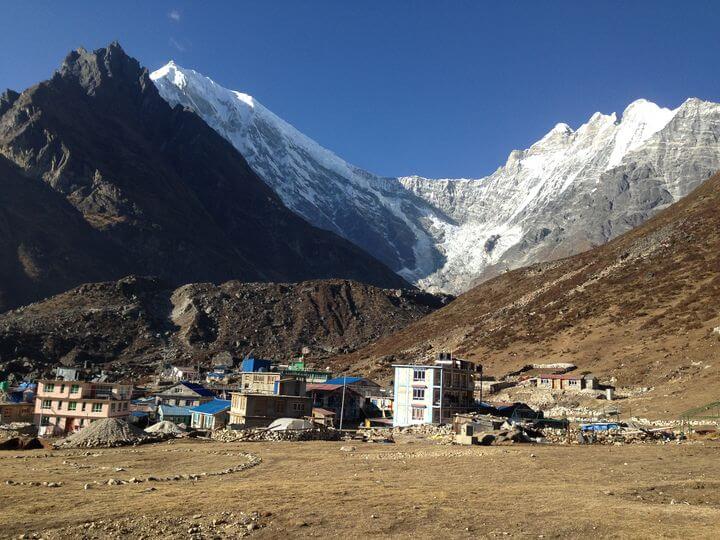 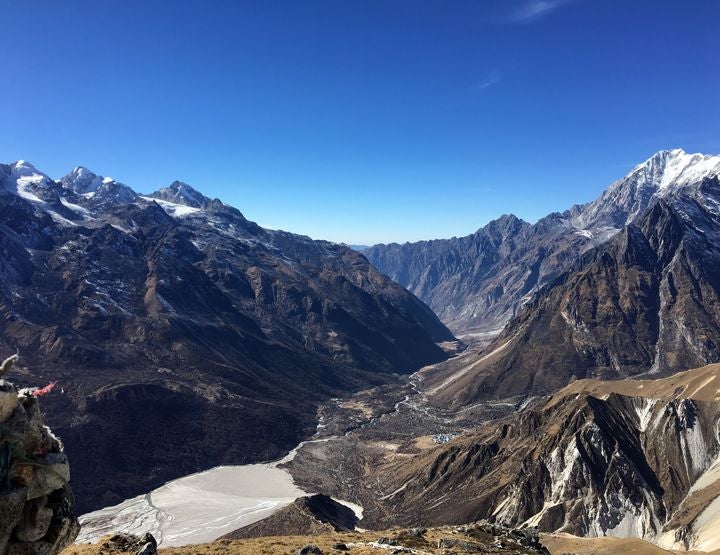 View from the summit of Tsergo Ri at 4980 meters

Traditional buildings in this region are of dry stone construction and did not fare well in the earthquake. The region was very badly damaged and suffered from multiple landslides; the now infamous Langtang village was completely destroyed with approximately 300 deaths. It was very poignant trekking with my Sherpa guide who had not been back to the area since the earthquake and we saw extensive levels of damage with many properties either having been rebuilt or currently undergoing construction. Up in these remote regions all construction is homeowner driven with very little technical partner assistance and so the quality of these new buildings can only be said to be marginally better than what used to stand in their place. Hopefully, Build Change’s nearby piloting of a dry-stone retrofit will be successful and provide a future preventive option across this region. 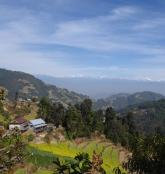 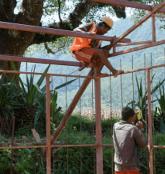