Is “Hurricane Fatigue” Set to Continue?

The midway point of the Atlantic hurricane season has just passed, and despite a relatively tame start, we have already witnessed two major U.S. hurricane landfalls — Harvey and Irma — in quick succession. It is the first calendar year on record where two hurricanes of Category 4 strength or greater have made landfall in the contiguous U.S. To add insult to injury, Maria has quickly intensified and is expected to be the fourth major hurricane of the season as it tracks through the Leeward Islands, an area left devastated by Irma less than two weeks ago.

With 13 named storms, seven hurricanes, and three major hurricanes, we have already met the National Oceanic and Atmospheric Administration (NOAA) definition of an above-average full Atlantic hurricane season. It is understandable that many in the insurance industry may be suffering from “hurricane fatigue” well before the calendar flips over to October.

But we should not be too surprised by this year’s activity. In August, NOAA elevated its 2017 hurricane season forecast originally issued in May, warning that this season had the potential to be extremely active. Several other seasonal forecasting agencies, such as Colorado State University and Tropical Storm Risk, also increased their May outlook reports during early August to call for a more active season.

It appears that these forecasts of an above-average season are increasingly being validated, with favorable conditions set to continue. With these forecasts in mind, what does the remainder of the 2017 hurricane season have in store?

From October 1, hurricane activity tends to reduce, with an average of two to three named storms occurring before the official end of the season on November 30.

However, the latest forecasts suggest we might see an active end to the season due to the influence of one of the primary drivers of seasonal activity in the Atlantic — the El Niño-Southern Oscillation (ENSO). My colleague, Christopher Allen, recently provided a detailed overview of the discovery and dynamics of ENSO, the planet’s largest source of natural climate variability.

ENSO remains in a neutral state at present, but equatorial sea surface temperatures in the central and eastern Pacific have been observed to be slightly below average during the last month. Similarly, sub-surface temperature anomalies have become increasingly negative in recent months. These cooler temperatures may signal cool-neutral or La Niña ENSO conditions in the coming months, favoring decreased Atlantic wind shear and offering a healthy environment for basin cyclogenesis.

Operational ENSO guidance favors cool-neutral conditions through the fall, but some models predict the formation of La Niña. In response, the Climate Prediction Center issued a La Niña Watch, indicating an increased chance of La Niña formation in the near term. 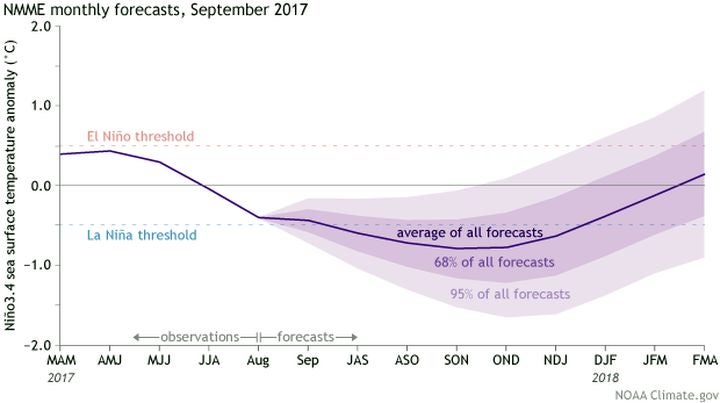 Although other climate signals can drive hurricane variability, historical late season cool-neutral ENSO phases have produced above-average activity in the latter months of the season. Weak La Niña conditions observed at the end of last season contributed to the formation of three major hurricanes in October and November.

A look back at recent records shows that October and November can produce some notable landfalling Atlantic hurricanes, including:

Activity in the latter months of the season tends to shift from the eastern Atlantic to the Gulf of Mexico and the Caribbean Sea. On the surface, this could increase the potential of developing storms to impact land; however, individual storm tracks are highly sensitive to the location of cyclogenesis and local atmospheric and oceanic conditions, so they cannot be forecast reliably more than a several days in advance. Even with this uncertainty in mind, the latest ENSO forecasts will keep all eyes focused on the Atlantic, as everyone is keen to know whether this “hurricane fatigue” will continue.