What is the El Niño Southern Oscillation? More conveniently known as ENSO, it is the planet’s largest source of natural climate variability on interannual time scales. ENSO describes the interaction between ocean and atmosphere in the equatorial Pacific, but the results of this interaction are global, and can last for many months. There is a good level of ENSO awareness in our industry, such as that warm phases of the oscillation (El Niño) tend to suppress Atlantic hurricane activity, and that cool phases (La Niña) tend to enhance it. But how was ENSO discovered? And how does it work?

The term “El Niño” (Christ child) was first used by fishermen in the seventeenth century to refer to the semi-periodic emergence of unusually warm seas off the coasts of Peru and Ecuador. The name was chosen because the arrival of these warmer waters typically coincided with the Christmas period. Arguably, however, the scientific understanding of this phenomenon did not originate from South America, but from India. The failure of the Indian summer monsoon rains in 1876 and 1877 which triggered the Great Famine, prompted Henry Blanford, the Imperial Meteorological Reporter to the government of India, to look for an explanation using atmospheric pressure observations. He not only discovered that pressure was anomalously high over India, it was also simultaneously high over large parts of Asia, Australia, and the south Indian Ocean.

Blanford contacted Charles Todd, the government meteorological observer for the colony of South Australia, who realized that drought in India was also usually concurrent with drought in Australia. What was being uncovered then is what we now call teleconnections – links in climate phenomena between seemingly distant parts of the Earth.

These links can be formalized statistically, and in the 1920s, mathematician Gilbert Walker was tasked with using them to predict fluctuations in the Asian monsoon. To do this, Walker developed regression equations between Indian rainfall and other remote surface observations, such as Himalayan snowfall accumulation. Walker also came up with an index describing the long-ranging fluctuations in surface pressure that had been observed by Blanford and Todd, which he termed the “Southern Oscillation”, hence the Southern Oscillation Index (SOI).

Bjerknes: Linking the Pacific Ocean and the Southern Oscillation

None of this early work however, explained El Niño, and nor did it seek to do so. But in the late 1960s, Norwegian meteorologist Jacob Bjerknes realized that the Pacific Ocean and the Southern Oscillation were irrefutably linked. 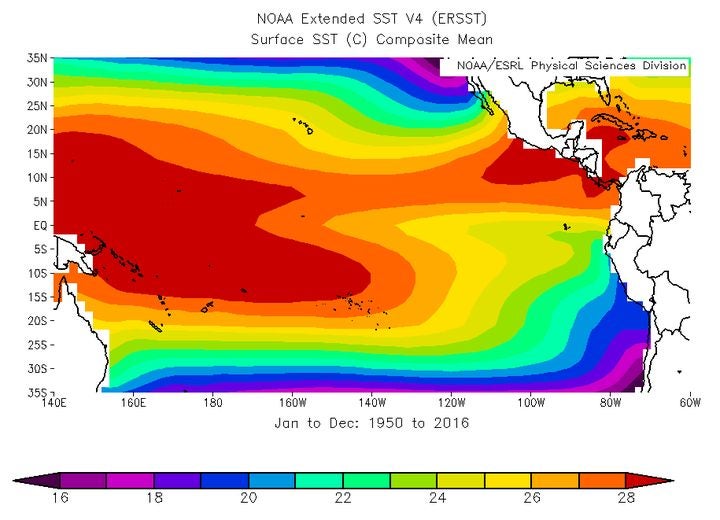 Under these conditions, known as “normal” or “neutral”, there is a thermal gradient between the two halves of the ocean basin, and as a result, winds blow from the cooler east Pacific across to the warmer west Pacific. Here, the air is heated, picks up moisture and rises, forming deep thunderstorms as the water vapor condenses. Once the air reaches the top of the troposphere, it spreads outwards back towards the east Pacific, where it cools and sinks back down over the colder water (Figure 2). Bjerknes called this atmospheric circulation loop the Walker Circulation, in honor of Gilbert Walker. Changes in the strength and position of the Walker Circulation explained fluctuations in Walker’s Southern Oscillation, and thus Bjerknes linked the Pacific Ocean with the Southern Oscillation. 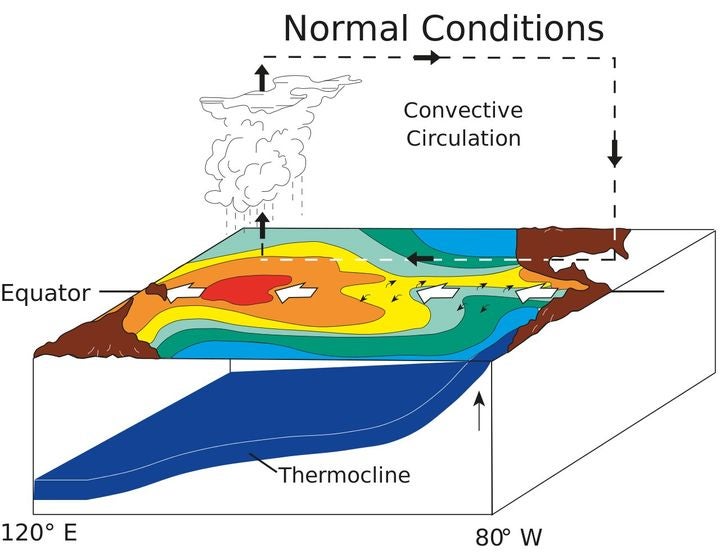 A further observation that Bjerknes made, was that these atmosphere and ocean conditions have a tendency to reinforce themselves. For instance, when the winds blow from east to west across the Pacific, they result in cool water being brought up from the depths towards the surface in the east Pacific (Figure 2). This increases the thermal gradient between the east and west Pacific, which strengthens the winds, which brings even more cold water up to the surface, and so the cycle intensifies. This eventually became known as the Bjerknes Feedback. When this feedback is particularly strong, and the SSTs in the eastern Pacific become significantly colder than their normally cool state, we have reached the cool phase of ENSO, known as La Niña conditions.

So how do we break this cycle, and end up with warm waters in the eastern Pacific, that is, El Niño conditions? Klaus Wyrtki, an oceanographer at the University of Hawaii, proposed an explanation. Tidal gauge measurements showed that when warm waters were piled up in the west Pacific, the sea level in the west Pacific was measurably higher than in the east Pacific. While winds continue to blow from east to west, this slope can be sustained, but if they relax (or reverse direction), the warm water moves downslope from the west Pacific towards the east Pacific, suppressing the upwelling of cold water and increasing SSTs, resulting in El Niño conditions (Figure 3). The anomalously warm SSTs increase deep convection and thunderstorm activity, and also shift it towards the central Pacific Ocean. This disrupts the Walker Circulation, with knock-on effects (the teleconnections) to atmospheric circulation patterns worldwide. 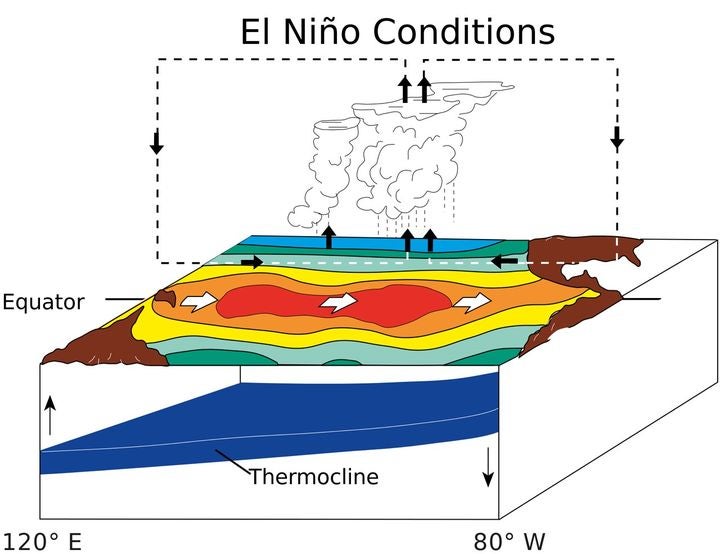 Given the complexity of the ENSO system, it is unsurprising that there are several different ways to measure it. The Southern Oscillation Index (SOI) is still used, albeit a modified version; more commonly however, SST anomalies are averaged over “boxes” that subdivide the equatorial Pacific (Figure 4). A summary of three commonly used ENSO indices is provided in Table 1.

By changing pressure and wind patterns and by transmitting long-distance waves through the ocean and atmosphere, El Niño and La Niña can influence climate at great distances from the Pacific Ocean (Figure 5). For example, El Niño tends to suppress North Atlantic hurricane activity by increasing wind shear and by promoting the large-scale descent of dry air in the Main Development Region, which is discussed with relevance to this year’s hurricane season in a separate RMS blog. It also influences weather and climate more locally, such as through changing the pattern of Australian tropical cyclone activity. 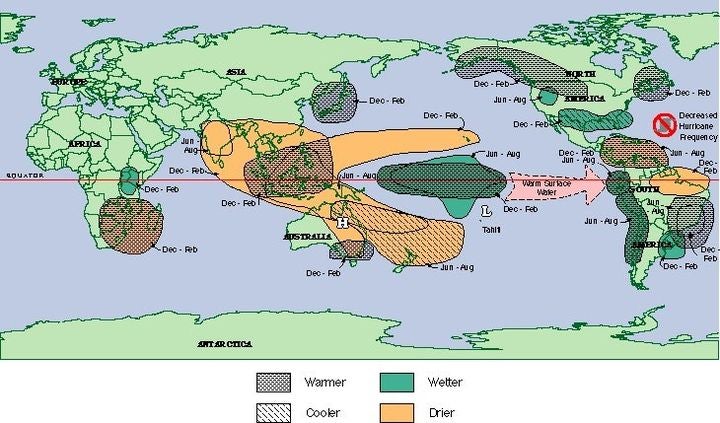 Scientific understanding of ENSO began somewhat by chance with meteorological observations thousands of miles from the Pacific. Today, thanks to the existence of these very same teleconnections, our understanding of the current state and likely evolution of ENSO can be used as a tool to forecast distant climate conditions and inform decision making, several weeks or even months in advance.