What If The Oroville Dam Had Collapsed Completely?

A combination of heavy rainfall and melting snow had filled Lake Oroville in northern California near to its capacity. Dam operators released water through the main spillway to control the reservoir level, but a 300-foot hole unexpectedly emerged, and the surrounding soil was eroded by the water gushing out. Spillway outflows were reduced to stop the erosion.

But this made the problem with rising reservoir levels worse, as the water then began to flow over the emergency spillway. On February 12, 2017, at least 188,000 residents were told to evacuate, while trucks and helicopters dumped over 1000 tons of material per hour on the weakened structure to prevent a more significant breach. As water levels in the reservoir subsided, the risk reduced.

With no massive discharge or flooding, insurance losses are expected to be limited to coverage for business interruption, loss of use, or additional living expenses (ALE) incurred by the evacuees.

It could have been far worse if the dam had completely failed – this was a worrying near-miss.

Dam failure, though rare, is not a negligible risk.  In fact, a similar near-miss situation occurred during the 1971 San Fernando earthquake where the lower Van Norman Dam was a near-breach and forced the evacuation of 80,000 people. Our modeling teams decided to model a counter-factual version of February’s Oroville Dam breach, in which either (i) the dam continues to disintegrate in a controlled manner or, (ii) in the worst-case scenario, it collapses.

Our flood modelers, Ye Tian and Sonja Jankowfsky, simulated these ‘what if’ scenarios over a 72-hour cycle, using reservoir water level data from the California Data Exchange Center’s Department of Water Resources, and their own estimation of the lake’s bathymetry (contours of the lake bed) and capacity.

The worst-case scenario is modeled assuming the height of the dam wall becomes ‘zero’ instantaneously – for example, as might happen if there was an explosion due to sabotage. For the controlled breach scenario, the dam wall is gradually lowered at two meters per hour to simulate what could have happened had the erosion of the dam continued.

In our modeling, the amount of discharged water would be expected to overwhelm local flood control measures over 100 miles downstream, as was evidenced by the widespread flooding in the simulations. We estimate that under either scenario, about $21.8 billion of building value would be at risk, which, for the communities near Oroville, would be a huge problem because much of it is uninsured.

Insurance coverage is one of the most effective ways of ensuring a region re-bounds quickly after disaster, but in the Oroville region flood insurance penetration is fairly low. Most property owners rely on the National Flood Insurance Program (NFIP), which is most commonly sold to homes in the 100-year flood plain along the Feather River.

This flood plain is shown as blue areas in this map. Compare that to the map below.

This map (right) shows modeling from the RMS ‘what if’ scenario of the Oroville Dam breach. The 100-year flood plain (map above) covers significantly less area than that which would be inundated if the dam breached (map right).

So, why does this matter? Residents living outside the 100-year flood zone are not required to purchase flood insurance, and therefore most do not. These areas include the towns of Biggs, Gridley, Live Oak, Oroville, South Oroville, Thermalito, and Yuba City. And yet as RMS modeling shows, many of those communities would have experienced major flooding if the dam had breached completely.

It is obvious that NFIP flood zone maps do not include dam failure scenarios, and yet these failures typically inundate a much wider area beyond the naturally occurring flood plain, because the volume of water and speed of release overwhelms natural and man-made defenses.

FEMA cannot quickly nor easily change the flood maps to incorporate this type of risk explicitly. At RMS, we are developing tools to quantify these kinds of extended risks to allow the private flood insurance market to step in and fill the current gaps in coverage.

Thankfully, our ‘what if’ scenario didn’t become a reality. But it highlights the risk of aging infrastructure which may not be able to withstand extreme weather events. Nationwide, the National Inventory of Dams indicates that of the 90,580 situated across the U.S., over 30% exhibit significant to high hazard potential due to structural deterioration.

[Note: clients can obtain modeling files for the Oroville Dam analysis from RMS account managers. This blog has been edited to provide further detail on the initial dam failure.] 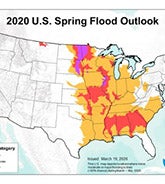