Coastal Flood: Rising Risk in New Orleans and Beyond

As we come up on the tenth anniversary of Hurricane Katrina, a lot of the focus is on New Orleans. But while New Orleans is far from being able to ignore its risk, it’s not the most vulnerable to coastal flood. RMS took a look at six coastal cities in the United States to evaluate how losses from storm surge are expected to change from the present day until 2100 and found that cities such as Miami, New York, and Tampa face greater risk of economic loss from storm surge.

To evaluate risk, we compared the likelihood of each city sustaining at least $15 billion in economic losses from storm surge – the amount of loss that would occur if the same area of Orleans Parish was flooded today as was flooded in 2005. What we found is that while New Orleans still faces significant risk, with a 1-in-440 chance of at least $15 billion in storm surge losses this year, the risk is 1-in-200 in New York, 1-in-125 in Miami, and 1-in-80 in Tampa. 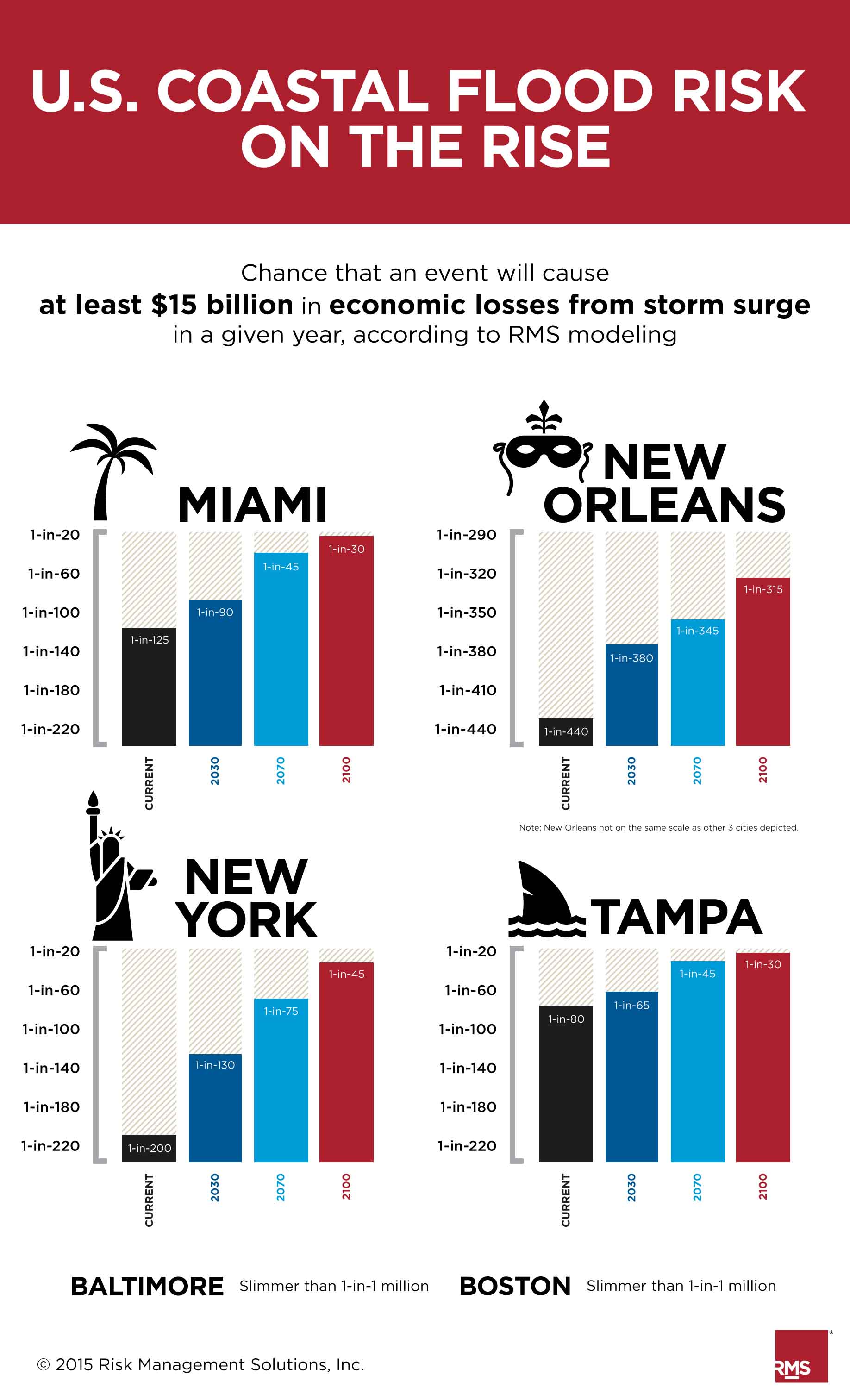 Due to flood defences implemented since 2005, the risk in New Orleans is not as dramatic as you might think compared to other coastal cities evaluated. However, the Big Easy is faced with another problem in addition to rising sea levels – the city itself is sinking. In fact, it’s sinking faster than sea levels are rising, meaning flood heights are rising faster than any other city along the U.S. coast.

Our calculations regarding the risk in New Orleans were made on the assumption that flood defences are raised in step with water levels. If mitigation efforts aren’t made, the risk will be considerably higher.

And, there is considerable debate within the scientific community over changing hurricane frequency. As risk modelers, we take a measured, moderate approach, so we have not factored in potential changes in frequency into our calculations as there is not yet scientific consensus. However, some take the view that frequency is changing, which would also affect the expected future risk.

Irma Impacts in the Caribbean

13:30 UTC  Thursday, September 7 Paul Wilson, vice president – Model Development, RMS This morning, the RMS Event Response team has started to assess major damage in the Caribbean caused by Hurricane Irma, which has become the strongest Atlantic hurricane on record. Our preliminary modeling for the Caribbean provides insights into the potential range of damage outcomes for each island that we understand to be impacted, including Antigua and Barbuda, British Virgin Islands, Anguilla, Saint Maarten and Saint Martin. It is already clear that damage ratios are high, particularly in Barbuda. As well as the devastating loss for these islands and their communities, RMS insurance industry clients will be focused on estimating the insured losses. Based on our analysis, RMS estimates the total insured values (TIV) in Anguilla to be around US$1.6 billion, with preliminary modeling indicating the potential for 50 percent damage. Barbuda has lower insured exposure, at less than US$200 million, but has experienced even more severe damage, potentially upwards of 90 percent. Saint Maarten and Saint Martin have approximately US$6.6 billion TIV together, and could have experienced a 30 percent loss. Of course, this is all preliminary and information from the ground remains uncertain. More information will come to light in the near term as reconnaissance efforts continue and the islands and their communities begin the long recovery process. RMS believes that due to the continuing and frequent evolution of the forecasts and uncertainty around an eventual U.S. landfall later this weekend, it is too early to begin specifically modeling Irma’s potential industry-wide impact on the U.S. However, RMS clients will be able to use our analytics to assess how the hurricane will affect their specific book of business and areas of exposure concentration, relative to the current forecast. Clients wishing to do this are advised to refer to earlier Irma-related posts on this blog, which provide guidance on analyzing the range of possible outcomes. RMS is keen to provide modeling for U.S. impacts as early as possible.  At this stage, we anticipate that the situation and forecasts will be sufficiently clear by tomorrow (Friday) for this to happen. Stay tuned.…

After Matthew: Putting a Value on Natural Coastal Defenses

As coastal communities in the U.S. continue to clear up and count the costs following Hurricane Matthew, we already know things could have been much worse. So, had the storm not weakened and veered off into the Atlantic but made direct landfall as a major hurricane would the infrastructure and coastal defenses along the south-east coast of the U.S. have held up? Or could we have been better prepared? One element often overlooked is that of natural coastal defenses, such as salt marshes and wetlands. While it’s still early days, it’s clear these natural ecosystems played a role in shielding Georgia and the Carolinas from some of the damage that Matthew inflicted. We can see these effects in the details of our reconstructions of Matthew’s storm surge footprint, but also because of some related research we’re publishing just today that for the first time puts an actual economic value on the protective effect of natural coastal defenses. Matthew’s surge was greater than 6 feet (1.8m), according to the National Weather Service, when it made landfall about 55km northeast of Charleston on October 8 as a Category 1 storm. Wetlands – such as those around Savannah and Charleston – would have taken the brunt, slowing down the force of the water and offering urban areas some protection against inundation from the sea. Because of the new study we’re now able to express the value of this protection in dollars. The study, Coastal Wetlands and Flood Damage Reduction was led by the University of California, Santa Cruz, The Nature Conservancy, and the Wildlife Conservation Society in partnership Guy Carpenter, Lloyd’s, and RMS. We contributed cutting-edge modeling expertise. The research looks back to Hurricane Sandy, which hit New York and New Jersey particularly hard in 2012, although its effect was felt across large swathes of the Eastern Seaboard. The study concluded that: Over $625m in property damage was avoided, with coastal wetlands providing a 10% reduction in property damages across states on average; In New Jersey, wetlands prevented an estimated $425m in losses; The protective value of wetlands during Sandy was nearly 30% in Maryland. Although the protections offered by features such as wetlands, salt marshes and barrier reefs are already captured by RMS catastrophe models, this was the first time we’d extracted, isolated and measured their unique role. This capacity to better understand and quantify the economic value of natural defenses is a critical tool for policymakers, conservationists and the insurance industry, particularly in regions where wetlands are being degraded. At RMS we anticipate that macro trends, such as sea level rise, will inevitably elevate the role of natural wetlands in the future. While the jury is still out on how climate change will impact the frequency and severity of hurricanes in the North Atlantic, the Intergovernmental Panel on Climate Change (IPCC) anticipates we will see more weather extremes by the end of the century. In its 2013 report the IPCC predicted that it was “more likely than not” that the number of the most intense storms will increase in certain parts of the world. And even without any significant change in windstorm severity, sea level rise can be expected to drive up coastal storm losses. According to Risky Business: The Economic Risks of Climate Change in the United States, a 2014 initiative led by former New York Mayor Michael Bloomberg and former U.S. Treasury Secretary Henry Paulson (and supported by RMS modeling), higher sea levels combined with storm surge will increase the average annual cost of coastal storms along the Eastern Seaboard and the Gulf of Mexico by $2 billion to $3.5 billion in just 15 years. Better understanding the financial benefits of natural coastline features will ultimately help communities build greater resilience to future storms and floods and to attract more funding for sea defense conservation and restoration. The necessary response may be driven by science and gradual sea level rise. Or it may come only after major catastrophes have done their damage in the future.…

Paul Wilson is a vice president in the RMS model development team leading the ongoing development of the RMS North Atlantic Hurricane and Storm Surge Models. Paul has a MSc. in Physics and a Ph. D. in Atmospheric Physics both from Imperial College London where his research focused on the application of extreme value statistics in the climate system and the impact of long‐ranged correlations on extreme events.