Are Fears of a Global Ebola Pandemic Warranted?

Ebola is a hot topic in the media right now, with multiple cases being reported outside of West Africa and much confusion among the general public around the reality of the danger. So, are the fear and sensationalism warranted?

RMS models infectious diseases and recently developed the world’s first probabilistic model for the current West African Ebola outbreak. While Ebola is indeed a very scary and relatively deadly disease, with a case fatality rate between 69 and 73 percent according to the WHO, RMS modeling shows that it is unlikely the outbreak will become a significant threat globally.

The spread of Ebola in West Africa is in part due to misconceptions and fear surrounding the disease and a lack of public health practices. Ebola can be passed solely via bodily fluids; the risk of unknowingly contracting the disease is low.

Fear is prevalent among some West African communities that Ebola is a lie or is being used purposefully to wipe out certain ethnic groups, causing them to hide sick family members from healthcare and aid workers. Customary burial practices, in which family members kiss and interact with the dead, also have contributed to Ebola’s spread. Getting the populace in these countries to trust foreigners who are telling them to abandon their customs has been an uphill struggle.

In more developed countries where health care is more advanced and understood, the chances of transmission are exponentially smaller due to the fact that extreme containment measures are taken. Controlling the spread of the disease comes down to a question of logistics; if the medical community can control the existing cases and trace the contact made with carriers, spread is much less likely. For example, the case in Texas can be contained to one degree as long as every single person in contact with the patient is tracked.

There is also a (speculative) fear of the virus mutating into an airborne pathogen; the fact is, the chances of the virus changing the way it is transmitted, from fluid contact to airborne passage, are very low and of a similar order of magnitude to the chance of emergence of a different highly virulent novel pathogen.

“When it comes to viruses, it is always difficult to predict what they can or cannot do. It is instructive, however, to see what viruses have done in the past, and use that information to guide our thinking. Therefore, we can ask: has any human virus ever changed its mode of transmission? The answer is no. We have been studying viruses for over 100 years, and we’ve never seen a human virus change the way it is transmitted.”

The tipping point in the modeling of a virus like Ebola is the point where the resources being used to mitigate the threat outpace the increase in new cases. Trying to get ahead of the epidemic itself is like a race against a moving target, but as long as people get into treatment centers, progress will be made in getting ahead of the illness.

So, while Ebola is a very scary and dangerous illness, it is not something that we expect to become a global pandemic. However, while the current outbreak is not expected to spread significantly beyond West Africa, it still has the potential to be the most deadly infectious disease in a century and could have drastic economic impacts on the communities that suffer from Ebola breakouts. In fact, the economic impacts are likely to be worse than the actual impacts of the disease, due to negative impacts to trade and inter-community relations.

The key is to contain it where it is, reach the tipping point as quickly as possible, and to promote safety around existing infected persons. Through travel control measures and the development of several new drugs to combat the virus, the danger of epidemic should be drastically reduced in Africa and, as a result, the rest of the world. 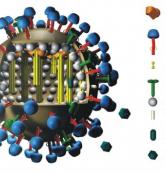 A Coup Against Flu?

Ebola in the U.S. – How big of problem are we looking at?

As mentioned in my previous blog post, Ebola has the potential to be one of the deadliest epidemics in a century, but the primary area of concern is Western Africa, where the virus is most prevalent. However, as cases pop up in the U.S., concerns are rising, as evidenced by the acute media analysis and discussion around the first case in New York, for example. Based on RMS modeling, we estimate that there will be between 15 and 130 cases in the U.S. between now and the end of the year—less than 1 case for every 2 million people. Our calculations assume that American medical professionals working with infected people in West Africa will account for the majority of cases. We simulated the number of new U.S. cases based on the existing infection rates among the American medical workers; this technique incorporates our projections for future West African caseloads and medical staff on the ground in the next two months, based on RMS’s epidemic scenario model. We then further modeled the virus’s spread once back in the U.S., taking into account the preparedness and higher quality of treatment facilities here versus the affected countries in West Africa. The high end of the range is likely a slight overestimate as our calculations exclude automatic quarantining measures that some areas of the US are implementing. These measures can both reduce the number of contacts (people who come into contact with the infected person) for the imported cases, as well as increase the travel burden on U.S. volunteers planning to support the effort in Africa; this in turn could potentially reduce the number of people who actually make it over to the affected region. The U.S. is prepared to handle the caseload even if it hits the upper range of 130 new cases. At any given time between now and December, specialized Ebola biocontainment facilities will have 11 beds available, which is enough to cope with the maximum weekly caseload in most of (but not all) of our modeled projections. In the more extreme scenarios, we still expect hospitals nationwide that have at least one Ebola treatment bed in place to handle overflow. Even if the reality over the next few months resembles a very pessimistic situation, it will be manageable given the U.S.’s higher capacity for managing cases. Catastrophe modeling is an art and a science. The interesting, albeit challenging, part about calculating a range for something like this is that so much is contingent on estimates. The very nature of the virus and the exponential way the epidemic spreads means our estimates of the uncertainty in the variables are amplified in the number of cases. Our estimate is largely dependent on when affected regions reach the tipping point, where the number of new daily cases declines rather than increases. Everything is interconnected – the pace at which the epidemic spreads directly affects the tipping point, which then affects the need for treatment and number of professionals, which in turn affects the potential number of cases that can be imported back to the U.S. As with all catastrophes we model, understanding risk is the first step toward mitigating and managing it.…

Dominic is the head of consulting in the LifeRisks team at RMS. He leads medical modeling projects related to longevity risk, mortality-longevity hedging, excess mortality and morbidity for clients in the (re)insurance and pensions sectors, and the broader field of catastrophe risk reduction. Dominic has modeled several live disease events, including the 2009 H1N1 Swine Flu pandemic and the 2014 West African Ebola outbreak. Dominic also leads RMS' work on structuring and modeling transactions that protect organizations against the financial impact of mortality events. Dominic guided the RMS analytics team through the groundbreaking Vita Capital IV transaction in 2009, the first transaction designed to cover an ongoing influenza pandemic, and the Kortis Capital and Catherine longevity trend risk transactions. Dominic holds an MA in Natural Sciences from the University of Cambridge and an MSc in Systems Biology from Imperial College London, and is a CFA Charterholder.