RMS Estimates Hurricane Irma Insured Losses from Wind, Storm Surge and Inland Flood Damage will be Between USD $35 and $55 Billion

The overall economic losses are estimated to be significantly higher, between $60 and $95 billion

LONDON, U.K. - September 20, 2017   RMS, a global risk modeling and analytics firm, has estimated that the insured loss from Hurricane Irma will be between $35 and $55 billion. This estimate represents the insured losses associated with wind, storm surge, and inland flood damage across Florida and the southeast United States (including losses to the National Flood Insurance Program). It also includes insured loss associated with wind and storm surge in the Caribbean.

RMS Best Industry Loss Estimate by Peril and Geography, in US$ Billions

Included in the industry estimate are losses to the National Flood Insurance Program of $2.5 to $5.5 billion that will add to the $7-10 billion estimated from Hurricane Harvey that occurred two weeks earlier.

“In the U.S., the losses from Irma will be significant and many communities have been severely disrupted. But had the hurricane made a direct impact on Tampa, the biggest city on Florida’s west coast, the losses would have been much higher. However, while the majority of Irma’s losses will come from Florida, it’s important not to overlook the Caribbean where several islands were devastated,” said Michael Young, RMS head of product management for U.S. climate models.

RMS expects both uninsured rainfall-driven flood losses in the U.S., and uninsured wind and storm surge losses in the Caribbean to be significant. Therefore, the overall economic losses will be substantially higher, according to the RMS estimate: between $60 and $95 billion.

One key driver of uncertainty in the Florida loss will be the extent and impact of demand surge from insureds, as Hurricane Irma affected nearly the entire peninsula with huge amounts of property exposure.

Hurricane Irma was the eighth named storm of the 2017 North Atlantic hurricane season. It was the first major hurricane (Category 3 or greater) to make landfall in Florida since Hurricane Wilma in 2005. It made landfall first in the Florida Keys on September 10, and later the same day at Marco Island, south of Naples. Prior to reaching the U.S. mainland, Irma hit several Caribbean islands, at times with sustained winds estimated by RMS HWind to have reached 188 mph, making it one of the most intense Category 5 intensity storms on the Saffir-Simpson Hurricane Wind Scale. 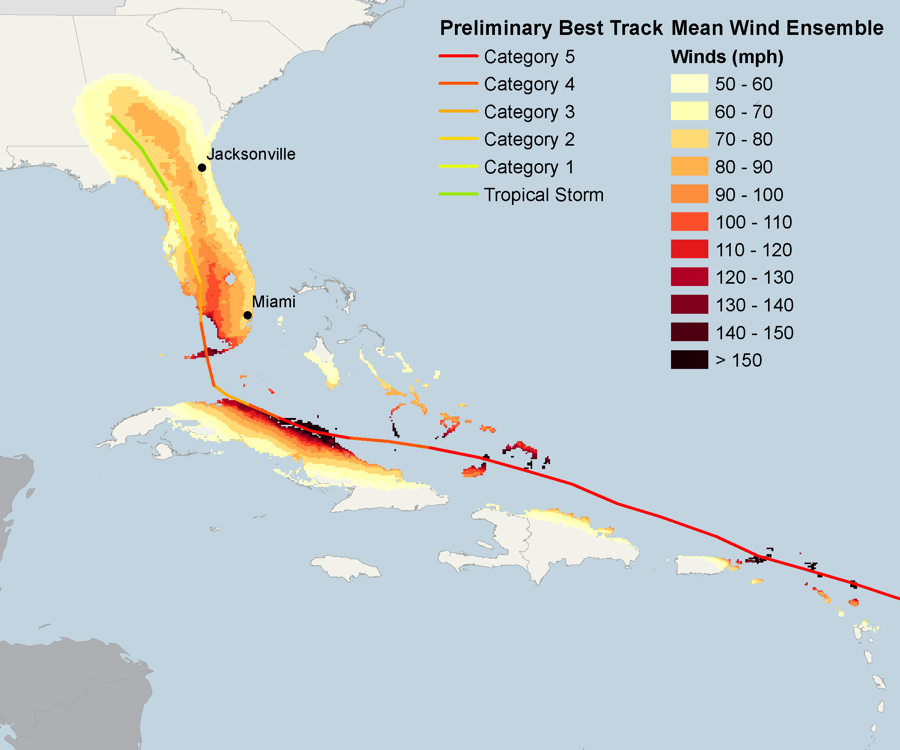 Given that the Caribbean has a lower rate of insurance take-up than the U.S., insured losses will constitute a fraction of the region’s total economic losses. Nonetheless, RMS estimates insured wind losses will be very significant for the Caribbean: between $10 and $20 billion, with five islands catastrophically impacted and high loss ratios.

For this loss estimate, the wind and storm surge extent was simulated using version 17.0 RMS North Atlantic Hurricane Models and RMS ensemble footprints, which are hazard reconstructions of Irma’s windfield and storm surge.

The new RMS® U.S. Inland Flood HD Model was also used to simulate the precipitation, run-off, and pluvial and fluvial flows across Florida and the southeast United States, using advanced hydrological/hydraulic models to simulate the flow of water over land.

In addition, RMS reconnaissance teams conducted detailed analysis of damage on the ground in Florida, helping to validate our modeling of the hurricane.

RMS Estimates that Total Insured Losses from the 2020 Western U.S. Wildfires Will Be Between US$7bn – US$13bn

Newark, CA – December 15, 2020 – RMS, the world’s leading catastrophe risk solutions company, estimates insured losses from the record-breaking western U.S. wildfires this season will be between US$7.0 and US$13.0 billion. These losses reflect estimates as of December 1, 2020 and represent an update from the previously estimated losses from fires up to September 20, 2020. The ignition of the highly damaging Glass Fire and additional spread of the CZU and LNU Complex Fires represent the most notable activity in California since September 20. RMS insured losses represent estimates from major wildfires in California, Oregon, Washington, and Colorado at December 1, 2020: Region Insured Losses (USD $ bn) as of 1 December, 2020 Northern California Oregon and Washington Colorado 5.0 - 9.0 1.0 - 3.0 Up to 1.0 The RMS estimate includes losses from property damage, including evacuation and smoke damage, business interruption (BI), and additional living expenses (ALE) across residential, commercial, and industrial lines. Smoke and evacuation are expected to be significant contributors to losses for the wildfires this season, contributing about 20 percent of losses in California and Colorado and about 35 percent in Oregon and Washington. The estimate also accounts for notable post-event loss amplification (PLA) from property damage (25 to 30 percent) and business interruption/ALE (up to 100 percent or greater). The RMS loss estimate is based on detailed modeling of fire spread, ember accumulations, and smoke dispersion of the fires utilizing the U.S. Wildfire High-Definition (HD) Model, part of the North America Wildfire HD Model suite, released in February, 2019. The model covers the entire contiguous U.S. and explicitly simulates ember and smoke to support detailed analysis of the impact of a wildfire beyond historical fire perimeters. The model’s findings were supported by Damage Inspection Specialist (DINS) damage surveys for California Fires, published damage reports from federal and respective state agencies for the Oregon, Washington, and Colorado fires, and the RMS U.S. Wildfire Industry Exposure Database. Michael Young, Vice President, Product Management said: “2020 represents the most destructive fire season on record, in terms of burn area in California. Since August, 69 major fires that exceeded 1,000 burned acres each, have burned so far. Five of the six largest ever California wildfires have occurred in 2020, with over 4.4 million acres burned in total to date. While fires earlier in the season were dominated by ignitions sparked by the intense lightning storm in August, extreme wind-driven fires dominated the last few months. A similar phenomenon resulted in record-breaking fires in Oregon as well this season, with over 20 major fires driven by extreme winds, burning more than 1.2 million acres so far. In October, Colorado experienced its three largest destructive fires with more than 24 major fires burning 850,000 acres in total. Rajkiran Vojjala, Vice President, Model Development said: “This wildfire season reaffirms the growing catastrophic nature of this peril. Wildfire risk is clearly evolving, not only in California, but also in other states, as we observed in Oregon and Colorado. While changing climate patterns have significantly influenced the record-breaking fires this season, several other factors also profoundly affected the ignition potential and expected losses from these events in different ways. Most notable amongst them are the Public Safety Power Shutoff (PSPS) measures undertaken by utilities, preparedness and response of firefighters in Northern California despite COVID-19 challenges, and recent legislative actions governing wildfire claims settlement such as the California Senate Bill 872. RMS is currently engaged with various stakeholders in evaluating these factors and understanding their impact on the emerging risk profile of this peril as part of its wildfire modeling agenda.”   END The technology and data used in providing this information is based on the scientific data, mathematical and empirical models, and encoded experience of scientists and specialists. As with any model of physical systems, particularly those with low frequencies of occurrence and potentially high severity outcomes, the actual losses from catastrophic events may differ from the results of simulation analyses. RMS SPECIFICALLY DISCLAIMS ANY AND ALL RESPONSIBILITIES, OBLIGATIONS AND LIABILITY WITH RESPECT TO ANY DECISIONS OR ADVICE MADE OR GIVEN AS A RESULT OF THE INFORMATION OR USE THEREOF, INCLUDING ALL WARRANTIES, WHETHER EXPRESS OR IMPLIED, INCLUDING BUT NOT LIMITED TO, WARRANTIES OF NON-INFRINGEMENT, MERCHANTABILITY AND FITNESS FOR A PARTICULAR PURPOSE. IN NO EVENT SHALL RMS (OR ITS PARENT, SUBSIDIARY, OR OTHER AFFILIATED COMPANIES) BE LIABLE FOR DIRECT, INDIRECT, SPECIAL, INCIDENTAL, OR CONSEQUENTIAL DAMAGES WITH RESPECT TO ANY DECISIONS OR ADVICE MADE OR GIVEN AS A RESULT OF THE CONTENTS OF THIS INFORMATION OR USE THEREOF.

London, UK – 23rd Nov, 2020 – RMS, the world’s leading catastrophe risk modeling company, collaborated with Willis Re Securities and Securian Financial to launch the new La Vie Re Limited (Series 2020-1) mortality catastrophe bond providing US$100m of reinsurance protection for Minnesota Life Insurance Company, a Securian Financial affiliate.   RMS acted as the modeling agent on the cat bond transaction, providing a view of the risk covered by the bond to investors. RMS used its suite of excess mortality and morbidity models, covering infectious disease pandemics, terrorism, earthquakes, and other perils, including a contribution to the expected loss from the COVID-19 pandemic. Covering the U.S., this is the first indemnity 144A excess mortality bond that models the cedants’ portfolio on a loss ratio basis.   The notes being issued by La Vie Re were launched to cat bond investors, and the full US$100m principal was achieved with a coupon price of 2.85%.    Jin Shah, Client Director, RMS, said: “Investors have warmly welcomed Securian Financial as a new sponsor to the ILS market. Likewise, RMS is pleased to support another new issuer secure reinsurance protection from the ILS market with a novel structure and trigger.   Using our life risk modeling capabilities, RMS developed an indemnity trigger on loss ratios and supported investors’ understanding of the risk, especially on the contribution from the current COVID-19 pandemic. The pandemic outlooks reflect the latest research on vaccine availability, efficacy and distribution, and how this may mitigate the impact of a second, winter wave of COVID-19 infections threatening regions where strict social distancing measures have been relaxed. It was a pleasure to collaborate with Securian Financial and Willis Re Securities and it’s great to see the ILS market continue to support innovation in the market.”

NEWARK, CA – October 27, 2020 – RMS, the world’s leading catastrophe risk modeling company, announces the appointment of Patrick (Pat) McCarthy as Executive Vice President of Sales and Client Development, with immediate effect.  Pat will lead this global organization for RMS, and brings a successful track record of delivering meaningful innovations and high-value solutions to some of the world’s most revered enterprises.   Pat joins RMS from SAP, where most recently he was Senior Vice President and General Manager of SAP’s Ariba and Fieldglass businesses, focused on enterprise supply chain optimization and risk reduction.  He also supported customers as they moved from legacy solutions to SaaS, always with an eye on value creation.  Pat had been at SAP for 15 years in various senior roles including as COO for a large part of the US business, the Midwest Market Unit. Prior to SAP, Pat spent seven years at Oracle in various leadership roles spanning sales, industry, and solution roles in its JD Edwards and PeopleSoft businesses. Pat started his career with ten years at Frito-Lay and Pepsi-Co, where he held several management roles. Pat will report directly to RMS CEO, Karen White. Karen White, Chief Executive Officer at RMS, said: “Pat is joining at an exciting and challenging time in our industry and at RMS.  He is exceptionally strategic and has earned his stellar reputation for bringing mission-critical innovations and solutions to global customers.  Pat’s impressive approach to deeply understanding the markets and enterprise customers he serves, with an eye on helping them to innovate and on their business outcomes, is aligned with RMS’s mission to be a strong strategic partner for our customers.  Pat’s formidable experience supporting global customers as they leveraged leading-edge  technology and solutions to advance their businesses will be a great asset to RMS and the customers we serve.”  Pat McCarthy added: “I’m very excited to be joining RMS as it’s an honor to work for a company so focused on building resilience into businesses and economies.  For 30 years, RMS’s science and models have been the most trusted view of risk in the industry.  It’s more important now than ever before that clients have access to the best modeling science and platforms, helping them drive business results that exceed their expectation.  I’m pleased to be leading a team that continues to leverage our core strengths and simultaneously maps out a future with our clients that leverages innovations and the latest science as we tackle the future of risk.”