RMS Estimates Hurricane Harvey Insured Losses from Wind, Storm Surge and Inland Flood Damage will be Between USD $25 and $35 Billion

“Although Harvey was a category four storm at landfall, the point of landfall along the coastline of Texas is less densely populated than other coastline areas, which has limited the magnitude of the overall total wind and surge related losses,” said Michael Young, head of U.S. climates modeling at RMS.

While wind and storm surge losses appear modest for a landfalling category four hurricane, RMS expects that significant losses associated with rainfall-driven flooding will drive total economic and insured losses in excess of those experienced from Superstorm Sandy in 2012. 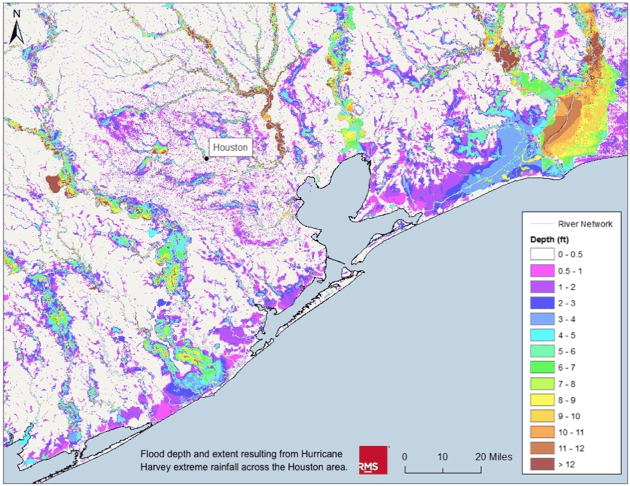 “The behavior of the storm is almost without precedent, and Harvey has already broken all U.S. records for tropical cyclone-driven extreme rainfall. Harvey's observed cumulative rainfall of 51in (129cm) far exceeds that of Allison in 200, Claudette in 1979, or Amelia in 1978, not only in volume but also in regional extent," said Young.

RMS ran the upcoming RMS U.S. Inland Flood HD Model in real-time to simulate the precipitation, run-off, and pluvial and fluvial flows across the Texas and Louisiana domain, to create a series of high-fidelity flood maps for clients to use to estimate expected flood losses.

The model was used to evaluate all sources of coastal and inland flood hazard, including: tropical and non-tropical cyclone precipitation, major and minor river fluvial flooding, and pluvial flooding – flash flooding and surface flooding.

The model’s ability to examine both defended and un-defended flood situations enabled RMS to assess where local levees may be overwhelmed. For Harvey, RMS considers that many of the local flood defenses were exceeded in the Houston area where the rainfall was most intense.

RMS solutions help insurers, financial markets, corporations, and public agencies evaluate and manage catastrophe risks throughout the world. RMS has over 1,200 employees across 13 offices in the US, London, Bermuda, Zurich, India, China, Japan, Singapore and Australia - our products and models covering six continents.

We lead an industry that we helped to pioneer—catastrophe risk modeling—and are delivering models, data, and risk management solutions on the RMS(one)® platform to transform the world’s understanding and quantification of risk through open, real-time exposure and risk management.

Insurers, reinsurers, trading companies, and other financial institutions trust RMS solutions to better understand and manage the risks of natural and human-made catastrophes, including hurricanes, earthquakes, floods, terrorism, and pandemics.