Chemical, biological, radiological, and nuclear (CBRN) weapons attacks constitute a sizeable portion of the terrorism risk confronting the insurance industry. A CBRN attack is most likely to occur in a commercial business center, potentially generating significant business interruption losses due to evacuation and decontamination, in addition to any property damage or casualties that occur. In the past, there has been a general agreement among leading counter-terrorism experts that the use of a CBRN weapon by a terrorist group is unlikely as these armaments were expensive, difficult to acquire, and complicated to weaponize as well as to deploy. Moreover, with the operational environment being curtailed by national security agencies, it would be a challenge for any group to orchestrate a large CBRN attack, particularly in the West. However, the current instability in the Middle East may have shifted the paradigm of thought about the use of CBRN weapons by a terrorist group. Here are some reasons:

The current instability in the Middle East, particularly the conflict in Syria and the ongoing Sunni insurgency in Iraq, has energized the salafi-jihadi groups and has emboldened their supporters to orchestrate large-scale casualty attacks. More harrowing is the fact that salafi-jihadi groups have been linked to several CBRN terrorist attacks. Horrific images and witness accounts have led to claims that local Sunni militants used chemical weapons against Kurdish militants in Syria and security forces in Iraq. 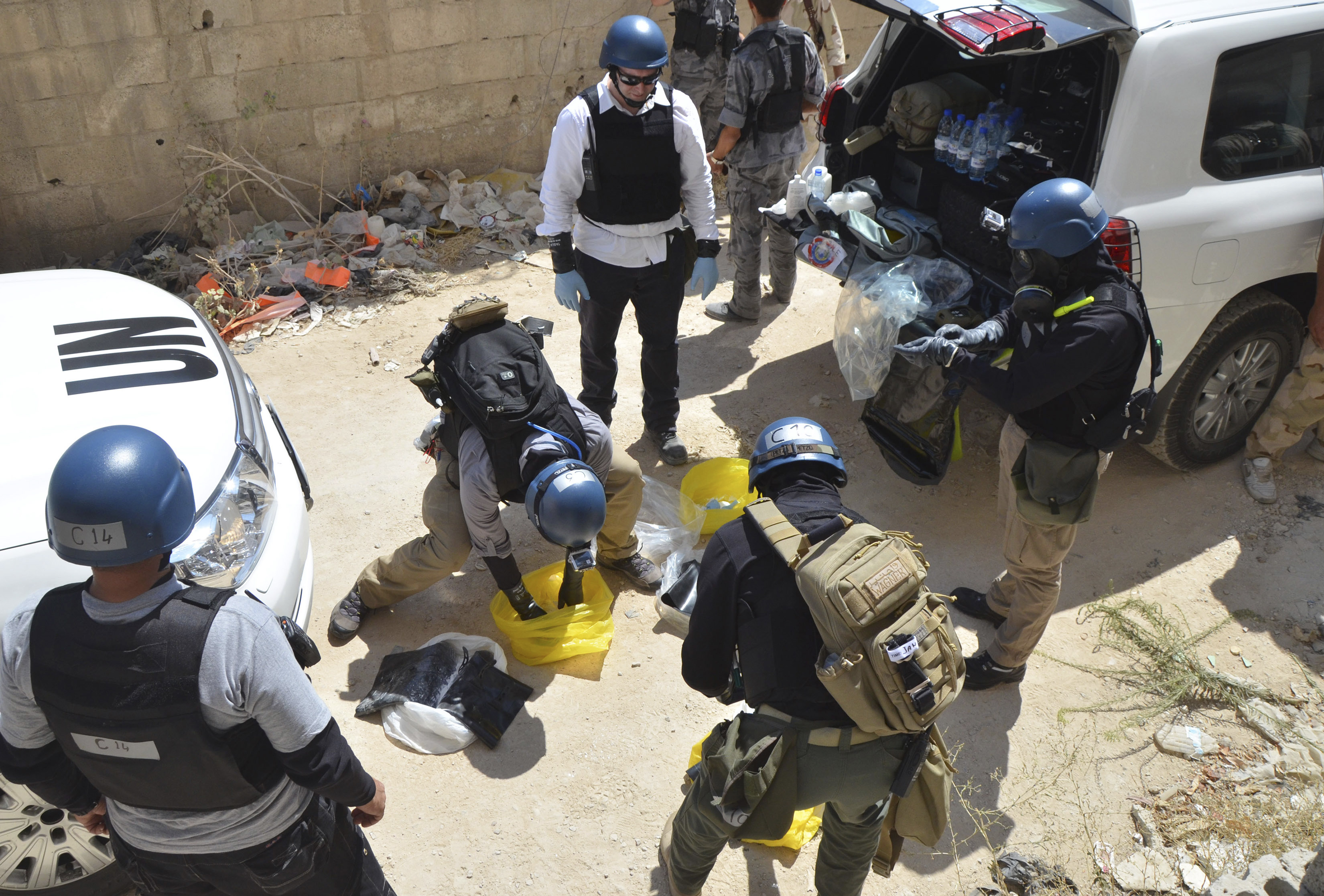 In Iraq and in Syria, the strongest salafi-jihadi group is the Islamic State, which has an even more virulent view of jihad than their counterpart al-Qaida. Several American counter-terrorism experts have warned that the Islamic State has been working to build the capabilities to execute mass casualty attacks out of their area of operation—a significant departure from the group’s focus on encouraging lone wolf attacks outside their domain.

To compound the threat, the Islamic State has access to extraordinary levels of funding that make the procurement of supplies to develop CBRN agents a smaller hurdle to overcome. A study done by Reuters in October 2014 estimates that the Islamic State possesses assets of more than of US$2 trillion, with an annual income amounting to US$2.9 billion. While this is a conservative estimate and much of their financial resources would be allocated to run their organization as well as maintain control of their territory, it still offers them ample funding to have a credible viable CBRN program.

Operating in weak or failing states can offer such a haven in which terrorist groups can function freely and shelter from authorities seeking to disrupt their activities. Currently, the Islamic State has control of almost 50% of Syria and has seized much of northern Iraq, including the major city of Mosul. The fear is that there are individuals working in the Islamic State-controlled campuses of the University of Mosul or in some CBRN facility in the Syrian city of Raqqa, the group’s de facto capital, to develop such weapons.

Despite commendable efforts by the Organization for the Prohibition of Chemical Weapons (OPCW) to render Syrian’s CBRN stockpiles obsolete, it is still unclear whether the Assad regime has destroyed their CBRN arsenal. As such, access to CBRN materials in Syria is still a significant concern as there are many potential CBRN sites that could be pilfered by a terrorist group. For example, in April 2013, militants in Aleppo targeted the al-Safira chemical facility, a pivotal production center for Syria’s chemical weapons program.

This problem is not limited to Syria. In Iraq, where security and centralized control is also weak, it was reported in July 2014 that Islamic State fighters were able to seize more than 80 pounds of uranium from the University of Mosul. Although the material was not enriched to the point of constituting a nuclear threat, the radioactive uranium isotopes could have been used to make a crude radiological dispersal device (RDD).

The Islamic State’s success in attracting foreigners has been unparalleled, with more than 20,000 foreign individuals joining their group. University educated foreign jihadists potentially provide the Islamic State with a pool of individuals with the requisite scientific expertise to develop and use CBRN weapons. In August 2014, a laptop owned by a Tunisian physics university student fighting with the Islamic State in Syria was discovered to contain a 19-page document on how to develop bubonic plague from infected animals and weaponize it. Many in the counter-terrorism field have concerns that individuals with such a background could be given a CBRN agent and then trained to orchestrate an attack. They might even return to their countries of origin to conduct attacks back in their homeland.

Terrorist groups such as the Islamic State continue to show keen desire to acquire and develop such weapons. Based on anecdotal evidence, there is enough credible information to show that the Islamic State has at least a nascent CBRN program. Fortunately, obtaining a CBRN capable of killing hundreds, much less thousands, is still a significant technical and logistical challenge. Al-qaida in the past has tried unsuccessfully to acquire such weapons, while the counter-terrorism forces globally have devoted significant resources to prevent terrorist groups from making any breakthrough. Current evidence suggests that the salafi-jihadists are still far from such capabilities, and at best can only produce crude CBRN agents that are more suited for smaller attacks. However, the Islamic State, with their sizeable financial resources, their success in recruiting skilled individuals, and the availability of CBRN materials in Iraq and Syria, has increased the probability that they could carry out a successful large CBRN attack. As such, it seems that it is a matter not of “if,” but rather of “when,” a mass CBRN attack could occur.

On Thursday, July 17, the Senate passed a reauthorization of TRIA, the Terrorism Risk and Insurance Act, extending the bill for seven years after its expiration at the end of 2014. The bill was passed with a 93-4 vote and made minor modifications to the expiring legislation. This is a promising sign for the insurance industry, which has been lobbying vigorously for a renewal since last year. But before the bill becomes law, there is certain to be opposition from influential members of Congress who favor more significant reductions to the federal government’s participation.

The Senate bill reduces TRIA’s coverage in two key ways: by increasing the industry co-pay from 15% to 20% over a five year period, and by pushing the Federal Government’s “mandatory recoupment” responsibility from $27.5 billion to $37.5 billion. By contrast, a competing bill proposed by Congress calls for even more substantial modifications, most notably raising the program trigger from $100 million to $500 million for all acts of terrorism except those arising from CBRN (chemical, biological, radiological, and nuclear) events.

How the two bills are reconciled will have significant implications for the insurance industry, as any reduction in federal participation will amount to additional risk assumed by insurance carriers. However, property insurers today are more willing to take on terrorism risk that they would have previously excluded, as evidenced by the dramatic drop in terrorism insurance prices over the past decade. A recent study by the Wharton Center for Risk Management downplayed the impact of TRIA changes, noting that while the changes could increase the price of coverage, “firms’ demand for terrorism insurance is not very sensitive to gradual price changes under current market conditions.”

Whatever the case, the ultimate outcome of the TRIA will have a measurable impact on the price and availability of terrorism insurance, primary carriers’ risk appetites in urban areas, and the securitization of terrorism risk, which my colleague Gordon Woo recently wrote about. The U.S. has made great strides in the capability of its counterterrorism operations over the past decade, but even with these gains, insurers and reinsurers must continue managing their pricing, underwriting, and capital deployment strategies to address the risk of future catastrophic acts of terror.