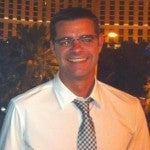 The RMS Exceedance event was a particularly exciting time for our team this year because for the first time ever, we held sessions and events specifically for developers.

I got to know many of the developers who are now using the RMS(one) API to build apps for the RMS(one) platform over the course of the week—during hands-on sessions with the RMS(one) API, through the Hackathon, which challenged participants to create apps in less than 24 hours, and at the Exceedance Party last night, where we celebrated a great week.

One of the highlights of my week was the Hackathon, because it showed how many great developers are part of our growing community. I was blown away by what our Hackathon participants were able to do in such a short period of time with the API. 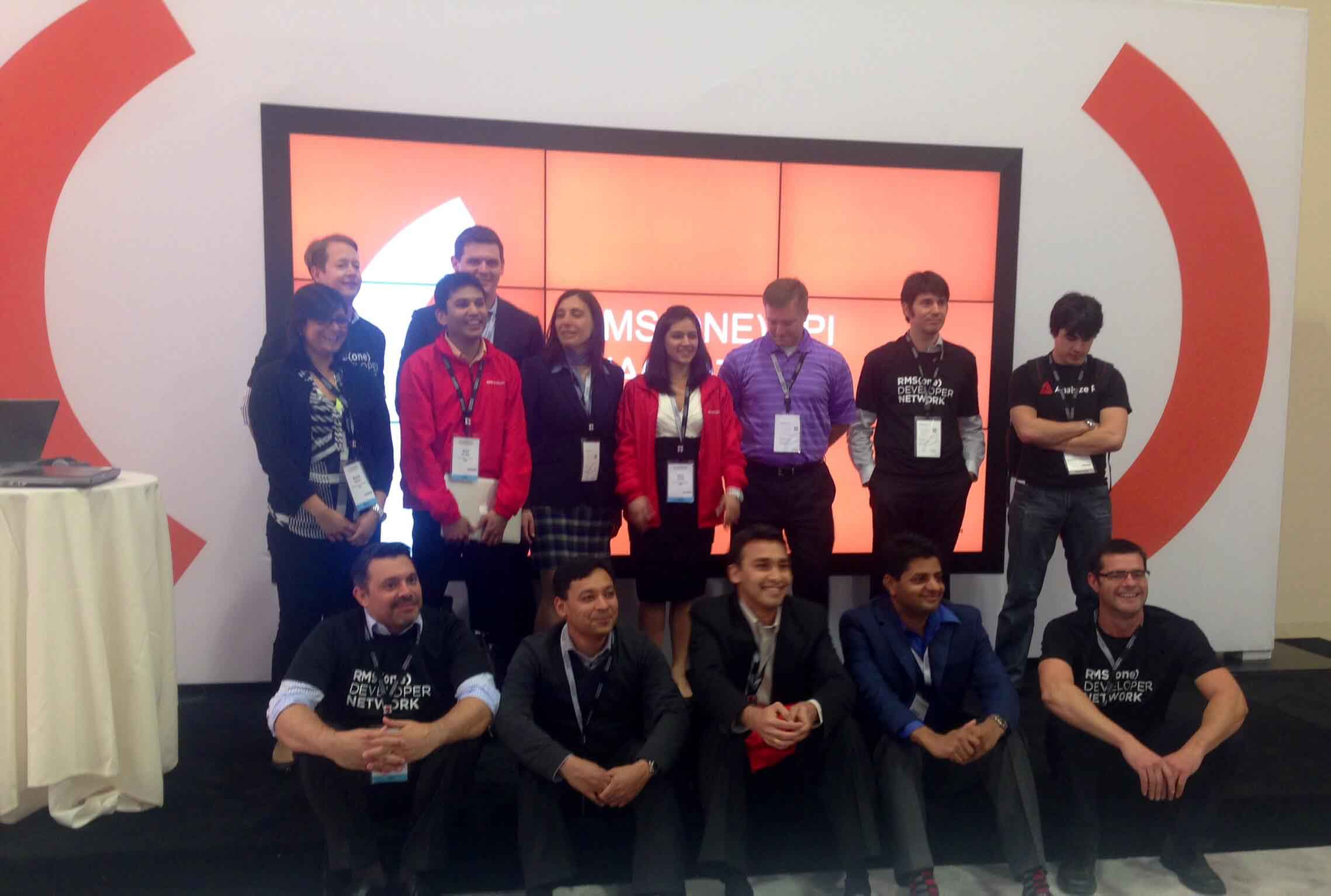 I had the pleasure of announcing the finalists in The Lab yesterday afternoon and would like to share them with you. 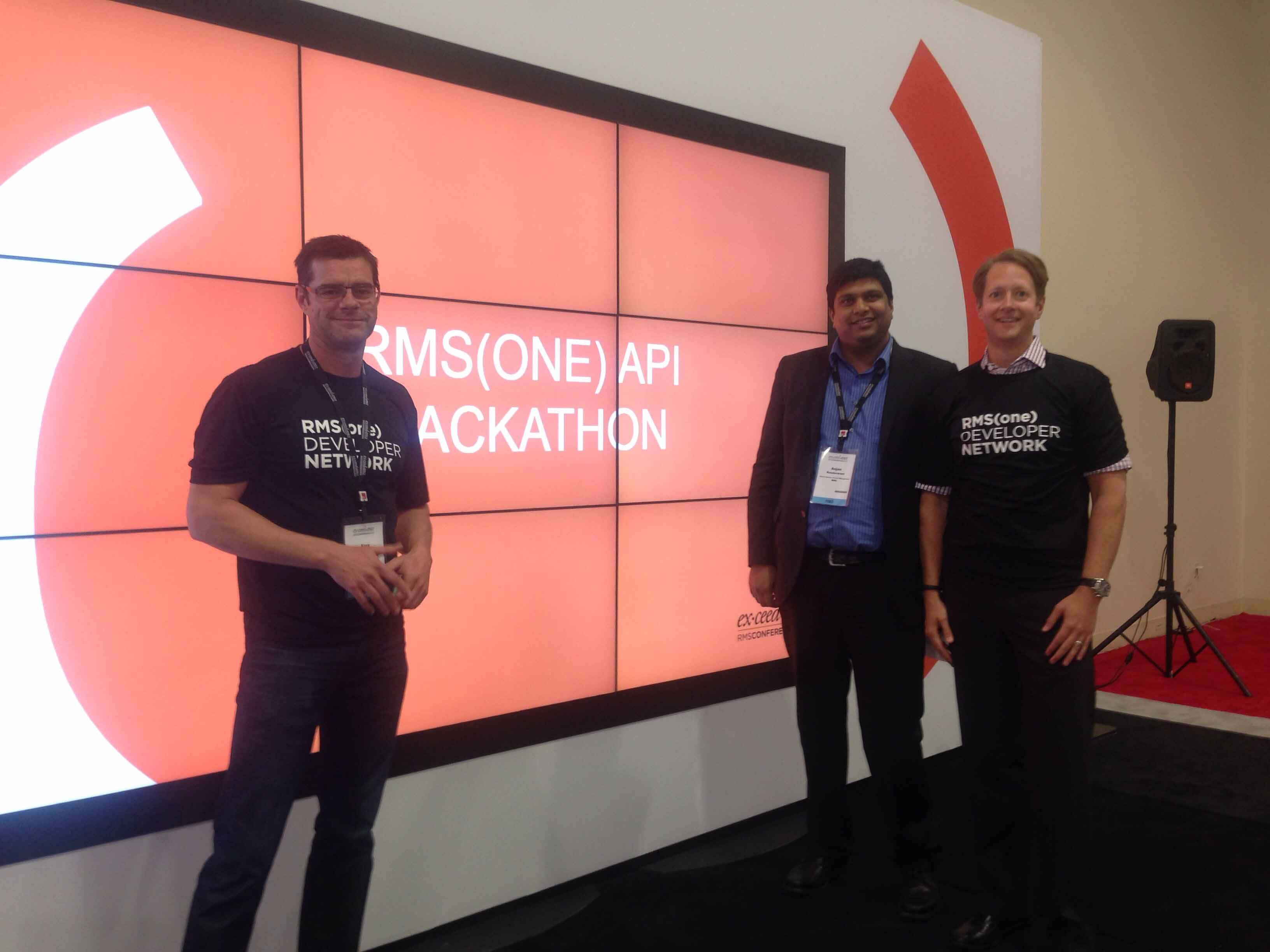 TickerJoy created by Scott Christian of AXIS, provides high-level summaries of exposure, losses, and other pertinent data in an ESPN-style ticker that can be customized to each user’s preference. TickerJoy is aimed at executives in particular, to provide context behind the data in an easily-digestible way. The app was built in VB and used Excel as the user interface.

CatBurglar created by Alain Bryden and Oliver Baltzer of Analyze Re, is a tongue-in-cheek app allowing hypothetical burglars to identify prime targets near them by arranging properties with high insured values on Google Maps. It even pulls data such as whether or not a house has a security system. Once a target is identified, the burglar can get directions to the property directly in Google Maps. Not only was this a fun, creative app; it also showed an interesting use of the API. (Don’t worry, real data wasn’t used, nor would real data be accessible to anyone outside of the organization that owns the data!)

And finally, our winner:

ClusterGuy created by Felipe Dimer De Oliveira of Risk Frontiers, built an app that compares two portfolios, merges risk exposures, and finds clusters using Mathematica. The results are exported to Google Earth, where clusters are indicated by colors, and portfolios are indicated by symbols. This highly visual way to compare portfolios earned the top prize from our Hackathon judges.

Thank you to everyone who joined us this week at Exceedance. I am looking forward to continuing to work with our developers in the coming months to see more great ideas like these come to life.

A core concept built into the architecture and design of RMS(one) is that it’s not just a SaaS product but an open platform. We believe that we make RMS(one) vastly more compelling by letting our clients leverage third party offerings as well as building their own capabilities to use in conjunction with RMS models, data, analytics, and apps. By leveraging RMS(one) as an open platform, clients will have the freedom and flexibility to control their own destinies. With RMS(one), they will be able to implement an exposure and risk management system to meet their individual needs. This week we took an important step closer to that reality. Introducing the RMS(one) Developer Network Gearing up for our launch of RMS(one) in April, this week we announced the RMS(one) Developer Network, the place for developers to access the technology, services resources, tools, and documentation needed for extending the RMS(one) platform. This is the first network of its kind in our industry, and we’re excited that our clients and partner developers are involved. The first members include Applied Research Associates, Inc. (ARA),  ERN , JBA Risk Management, and Risk Frontiers. These are our first set of model developer partners. Over time we’ll be announcing more model developers as well as other types of partners. The Developer Network lets clients and partner developers integrate tools, applications, and models with RMS(one). Through the Developer Network, we provide access to the RMS(one) Model Development Kit (MDK), enabling the development of new models and the translation of existing models so they can be hosted on RMS(one). And this is how client developers will be able to access the RMS(one) API on April 15, the day RMS(one) is launched. The Exceedance 2014 Developer Track We will also be hosting a series of developer sessions at Exceedance, from April 14 to 17 in Washington, D.C. These classroom and hands-on sessions will help client developers learn how the RMS(one) API enables programmatic data access and the integration of their applications, tools, and services on RMS(one). For client model developers, they can learn how to work hands-on with the MDK to create and host their own custom models on RMS(one). To get more details about the tracks and how clients can register for Exceedance, you can learn more here. Growing a Thriving Ecosystem The ability to choose between internal or third party capabilities, either separately or in tandem, but within one integrated platform, is essential to our clients’ ability to make RMS(one) right for them. This freedom of choice is a major consideration for most clients, if not all, when they decide to commit to using RMS(one) as a mission-critical, core system for their enterprises. Potential third-party developer partners can contact us to learn more about the value of integrating software, models, and data with RMS(one). With the RMS(one) Developer Network, we are enabling a thriving ecosystem that takes full advantage of the power of RMS(one) by extending the scale and relevance of the RMS(one) platform. We look forward to you joining us on this exciting journey!…

Alex and his team enable RMS clients and third-party developers to effectively build models, data, and applications on and around RMS(one). Alex brings more than 15 years of developer leadership experience from enterprise technology companies such as Intuit and Microsoft. Most recently, he served as the group manager of developer relations at Intuit, where he was responsible for all aspects of strategy, planning, and execution of developer marketing, platform evangelism, technical and business education, and technical support. During his time at Intuit, he led the relaunch and rebranding of the Intuit Partner Platform, and the doubling of membership in the company's developer programs. Prior to that, Alex was VP, Developer Community, at Bungee Labs, a pioneer in the platform as a service (PaaS) space. He spent five years at Microsoft in various community program management and marketing positions, and was COO at Bluewave, a leading digital marketing and web development agency, for seven years. He blogs at http://alexbarnett.net/blog/ and tweets at http://twitter.com/alexbarnett.