Rumbling Below the Waves

Which of the following would you say has the shortest odds?

Tsunamis can be devastating when they occur, as we saw when the Indian Ocean tsunami hit in 2004 and more recently with the Tohoku, Japan tsunami in 2011. But before these events, tsunami risk wasn’t high on many (re)insurers agendas.

It’s one of those risks that many would place in the upper left green section of the frequency / severity risk map below, requiring periodic attention. 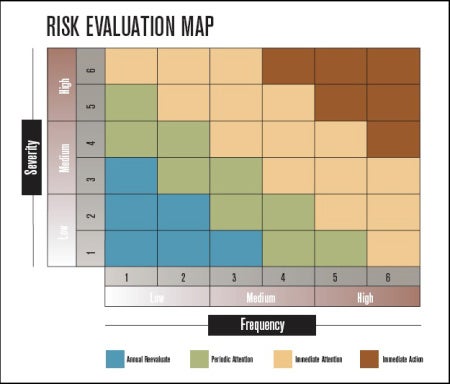 The first step in managing risk is to identify and categorize it.

Some other natural catastrophe risks, such as earthquake, fall near this region but generally garner immediate attention. So what made tsunami different?

Tsunamis have a particularly low frequency, especially when only considering events that have impacted developed regions. In addition, limited data availability and complexities associated with modeling this hazard meant that it was a risk that the industry was aware of but didn’t necessarily evaluate.

The lack of data was highlighted by the Tohoku event. An earthquake of the magnitude observed was not anticipated for the subduction zone off the east coast of Japan. The maximum projected earthquake magnitude was 8.3, with accompanying expected tsunami heights not as large as those experienced. Sea walls built along northeast Japan’s coastal towns, such as in Minamisanriku, Miyagi, weren’t designed to protect against the tsunami that occurred.

This devastating event brought tsunami risk into sharp focus but the questions we must now ask are:

An interesting conundrum surrounding the first question is the number of very large earthquakes that we have observed recently.

Before the 2004 Indian Ocean tsunami, the last earthquake greater than magnitude 8.6 occurred 40 years earlier (1965’s Mw 8.7 Rat Islands, Alaska Earthquake). However, since 2004 we have observed 5 earthquakes equal to or greater than Mw 8.6. It’s unclear whether we have underestimated the potential for large earthquakes or are just observing a random clustering of large events.

As research continues into the frequency and occurrence of these events, perhaps the best approach is to focus on understanding hazard hot spots. Most devastating tsunamis are generated by earthquakes in subduction zones and incidentally, subduction zones are where most great earthquakes (Mw 8.7+) have been observed.

Since 1900 all observed great earthquakes were generated on shallow subduction zone “megathrust” faults. Therefore it is vital to understand where these earthquakes occur and the potential associated tsunami scenarios.

Looking back to our risk map, risks with this frequency / severity combination may not stop (re)insurers providing cover. However, assessing scenarios will help them understand their tail risk and manage potential accumulations, which may lead to stricter underwriting guidelines and policy terms in high-risk zones.

Typhoon Haiyan recently highlighted the devastation caused by coastal inundation. On this occasion from storm surge, yet the city of Tacloban is vulnerable to tsunamis of greater height, as noted by Robert Muir-Wood in his recent post.

November 25th marked the 180th anniversary of another great earthquake to strike the region of Sumatra, Indonesia; the 1833 event occurred just south of the location of the devastating 2004 earthquake and also caused a significant tsunami.

These events remind us that while tsunami may be an infrequent hazard, coastal inundation can be devastating and these events have occurred in the past and will occur again in the future.

Although the industry may not know when the next event will occur, tools like accumulation scenarios can help (re)insurers explore the risk, understand where their exposure to tsunami is greatest and evaluate how to best to manage it.

When it rains in Sulawesi it blows a gale in Surrey, some 12,000 miles away? While these occurrences may sound distinct and uncorrelated, the wet weather in Indonesia is likely to have played some role in the persistent stormy weather experienced across northern Europe last winter. Weather events are clearly connected in different parts of the world. The events of last winter are discussed in RMS’ 2013-2014 Winter Storms in Europe report, which provides an in-depth analysis of the main 2013-2014 winter storm events and why it is difficult to predict European windstorm hazard due to many factors, including the influence of distant climate anomalies from across the globe. Can we predict seasonal windstorm activity during the 2014-2015 Europe winter windstorm season? As we enter the 2014-2015 Europe winter windstorm season, (re)insurers are wondering what to expect. Many consider current weather forecasting tools beyond a week to be as useful as the unique “weather forecasting stone” that I came across on a recent vacation. I am not so cynical; while weather forecasting models may have missed storms in the past and the outputs of long-range forecasts still contain uncertainty, they have progressed significantly in recent years. In addition, our understanding of climatic drivers that strongly influence our weather, such as the North Atlantic Oscillation (NAO), El Niño Southern Oscillation (ENSO), and the Quasi-Biennial Oscillation (QBO) is constantly improving. As we learn more about these phenomena, forecasts will improve, as will our ability to identify trends and likely outcomes. What can we expect this season? The Indian dipole is an oscillation in sea surface temperatures between the East and West Indian Ocean. It has trended positively since the beginning of the year to a neutral phase and is forecast to remain neutral into 2015. Indonesia is historically wet during a negative phase, so we are unlikely to observe the same pattern that was characteristic of winter 2013-2014. Current forecasts indicate that we will observe a weak central El Niño this winter. Historically speaking this has led to colder winter temperatures over northern Europe, with a blocking system drawing cooler temperatures from the north and northeast. The influence of ENSO on the jet stream is less well-defined but potentially indicates that storms will be steered along a more southerly track. Lastly, the QBO is currently in a strong easterly phase, which tends to weaken the polar vortex as well as westerlies over the Atlantic. Big losses can occur during low-activity seasons Climatic features like NAO, ENSO, and QBO are indicators of potential trends in activity. While they provide some insight, (re)insurers are unlikely to use them to inform their underwriting strategy. And, knowing that a season may have low overall winter storm activity does not remove the risk of having a significant windstorm event. For example, Windstorm Klaus occurred during a period of low winter storm activity in 2009 and devastated large parts of southern Europe, causing $3.4 billion in insured losses. Given this uncertainty around what could occur, catastrophe models remain the best tool available for the (re)insurance industry to evaluate risk and prepare for potential impacts. While they don’t aim to forecast exactly what will happen this winter, they help us understand potential worst-case scenarios, and inform appropriate strategies to manage the exposure.…